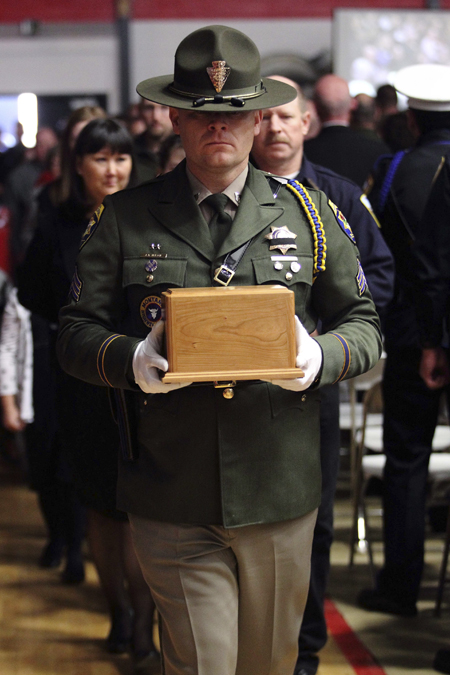 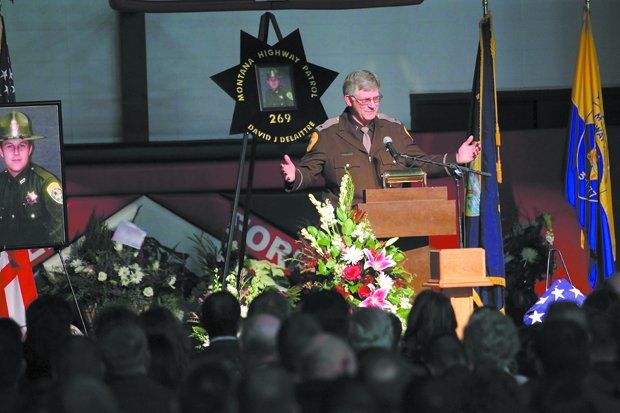 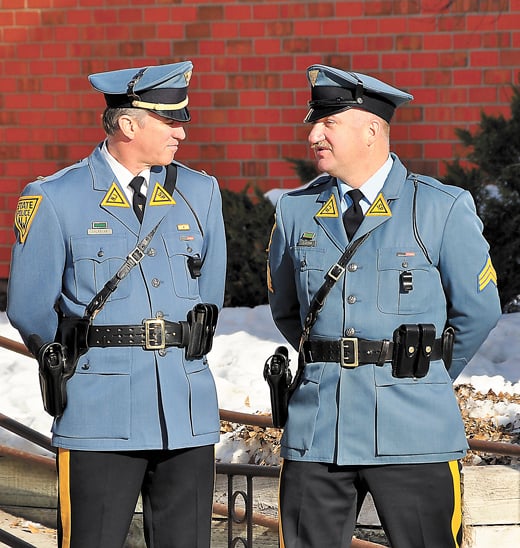 Two officers of the New Jersey State Police converse while standing as part of an honor guard of officers from around the country at the funeral of Montana state trooper David DeLaittre Tuesday at Three Forks High School. They were among dozens of officers who came from out of state for the ceremony. View more photos in our online gallery.
1 of 3

Two officers of the New Jersey State Police converse while standing as part of an honor guard of officers from around the country at the funeral of Montana state trooper David DeLaittre Tuesday at Three Forks High School. They were among dozens of officers who came from out of state for the ceremony. View more photos in our online gallery.

Trooper David DeLaittre was a warrior, who fought valiantly in the battle that cost him his life — just as his Old Testament namesake did in a battle with the giant Goliath, Chaplain Warren Hiebert told a crowd of thousands who turned out for DeLaittre’s funeral Tuesday in Three Forks.

“To the end, he had his gun, his magazines, and no one took them from him,” Hiebert said. “Multiple rounds fired, he fought as a warrior, with tenacity and bravery.”

Hiebert’s words were just a few of the poignant, touching or tear-provoking statements made about DeLaittre during the 2-hour service. DeLaittre’s father, Dennis, also eulogized the 23-year-old Montana Highway Patrolman, call sign 269, who died in a gunfight with a man he had stopped to check on along Highway 2 near Three Forks Wednesday, Dec. 1.

The elder DeLaittre said his son was very observant and there was no problem or mechanical trouble he couldn’t fix.

Even at a young age, David DeLaittre knew every tool in the box and every make and model of vehicle on the road.

At 8, he had his first vehicle accident, getting the keys to his dad’s truck and bumping into another car while backing it up. Even at that age, David was able to pin it back on his father with a quick wit.

“He told me I should have taught him to back up correctly,” the elder DeLaittre said.

Dennis DeLaittre read from prepared comments — a letter he wrote as part of his eulogy. He thanked his son for the 23 years they had spent together with his mother, Nancy.

“David, I knew I was expecting you to take care of your mom and sisters. But we don’t always get what we want,” he said.

“David was kind, caring, generous and always offered whatever was needed,” she said.

Three of DeLaittre’s former teachers at Three Forks High School also spoke, painting him as an accomplished craftsman with a sense of humor and a mischievous side, but who above all was loyal and always looking for a challenge.

An estimated 2,000 people flocked to Three Forks for the ceremony, and the gym was filled to capacity, with the crowd spilling out into an adjacent cafeteria. They also filled the high school auditorium and another gymnasium.

Law enforcement agents came from as far away as Alaska, New Jersey and Florida to be part of the service and a 500-vehicle funeral procession before the ceremony started.

The procession traveled five miles from the Headwaters Livestock Auction facility on U.S. Highway 287 northwest of Three Forks, and from start to finish, took 90 minutes. People lined up along the parade route, where they waved flags and paid their respects to the public servants occupying the vehicles.

A Patrol spokesman said Thursday that at last count, 28 states were represented in the procession, and cars from most of Montana’s 56 counties participated, as well as representatives from more than a dozen federal agencies — from the U.S. Park Service to the Bureau of Indian Affairs to the U.S. Marshals Service, Customs and Border Protection and Department of Homeland Security.

—The Associated Press contributed to this report.