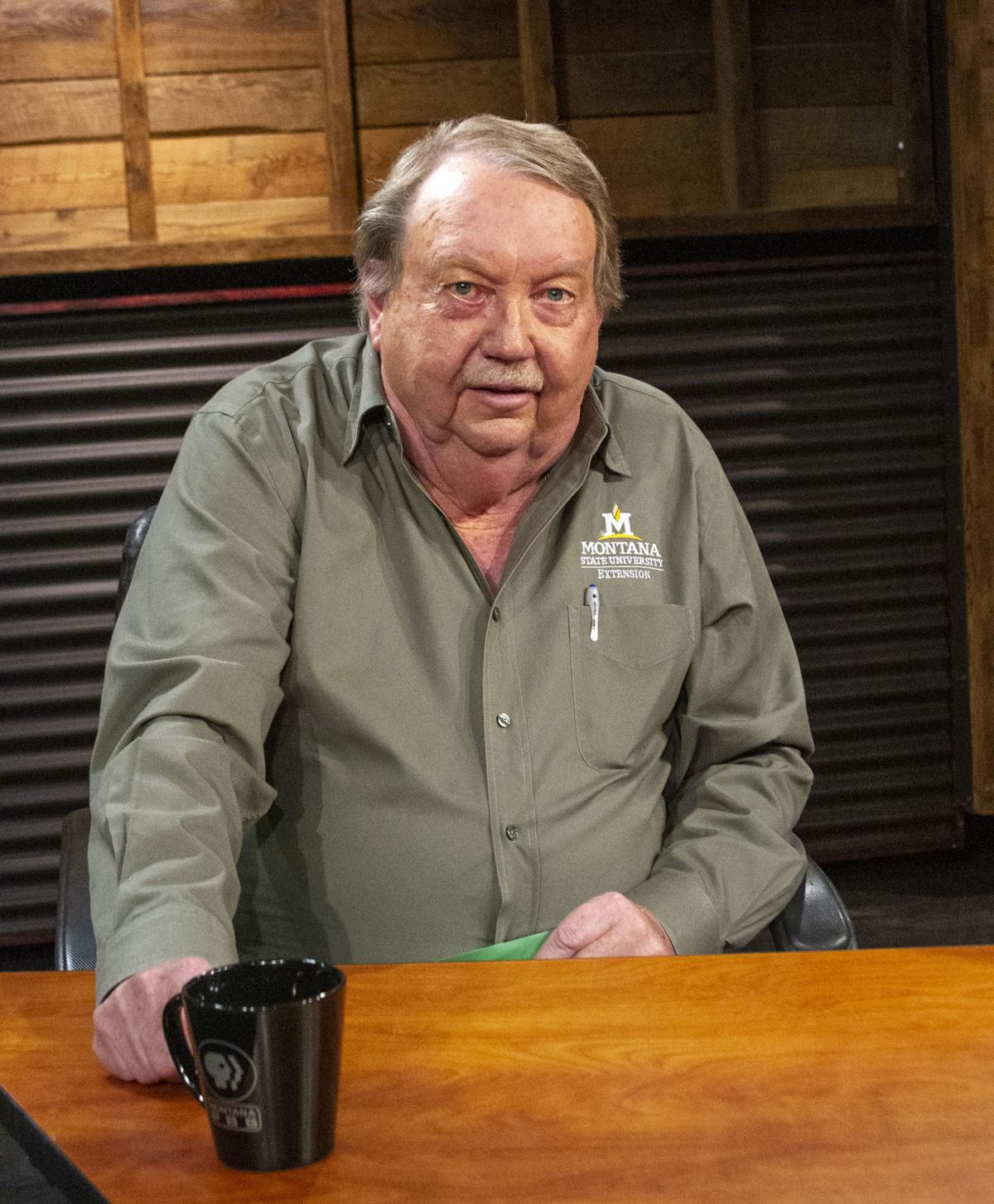 Montana AgLive was conceived by Jack Reisselman, left, who patterned the show after a show in Nebraska called The Backyard Farmer. Hayden Ferguson, right, was the popular host of Montana AgLive for many years. 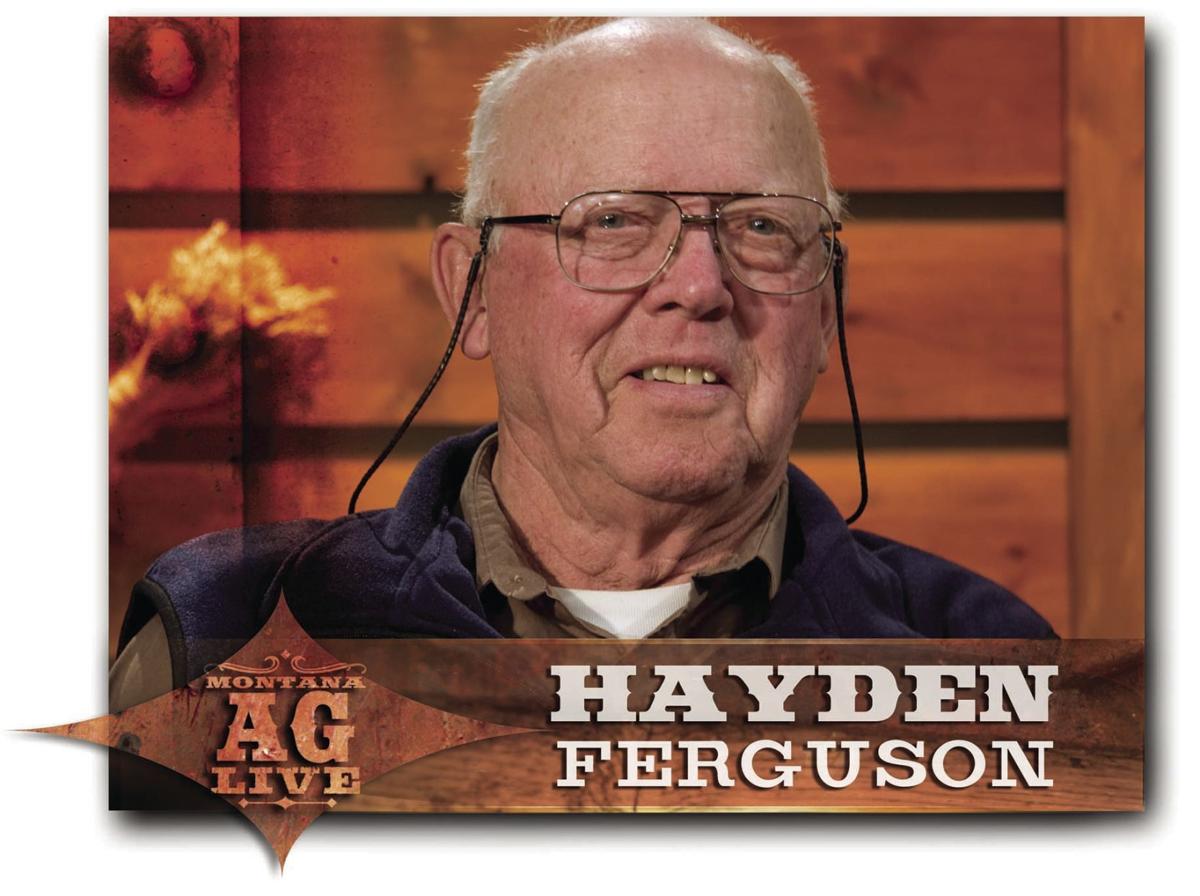 Hayden Ferguson was the popular host of Montana AgLive for many years. 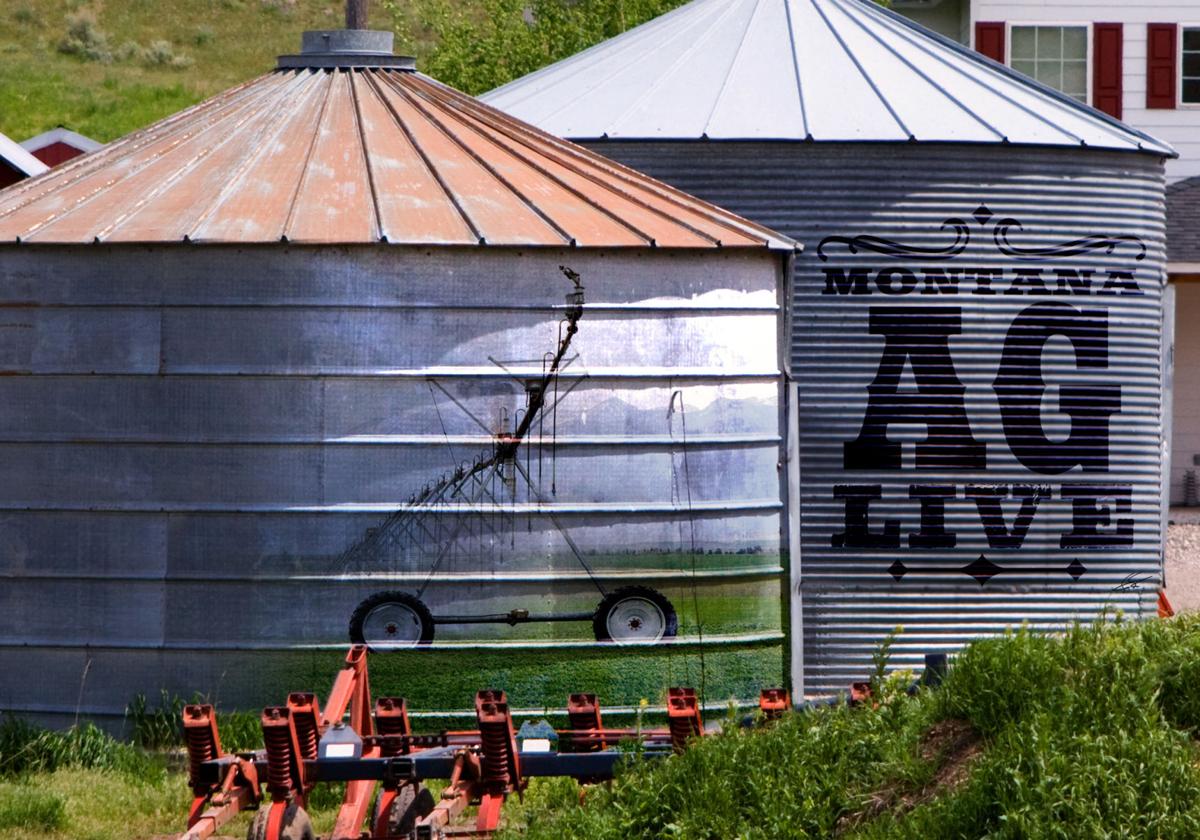 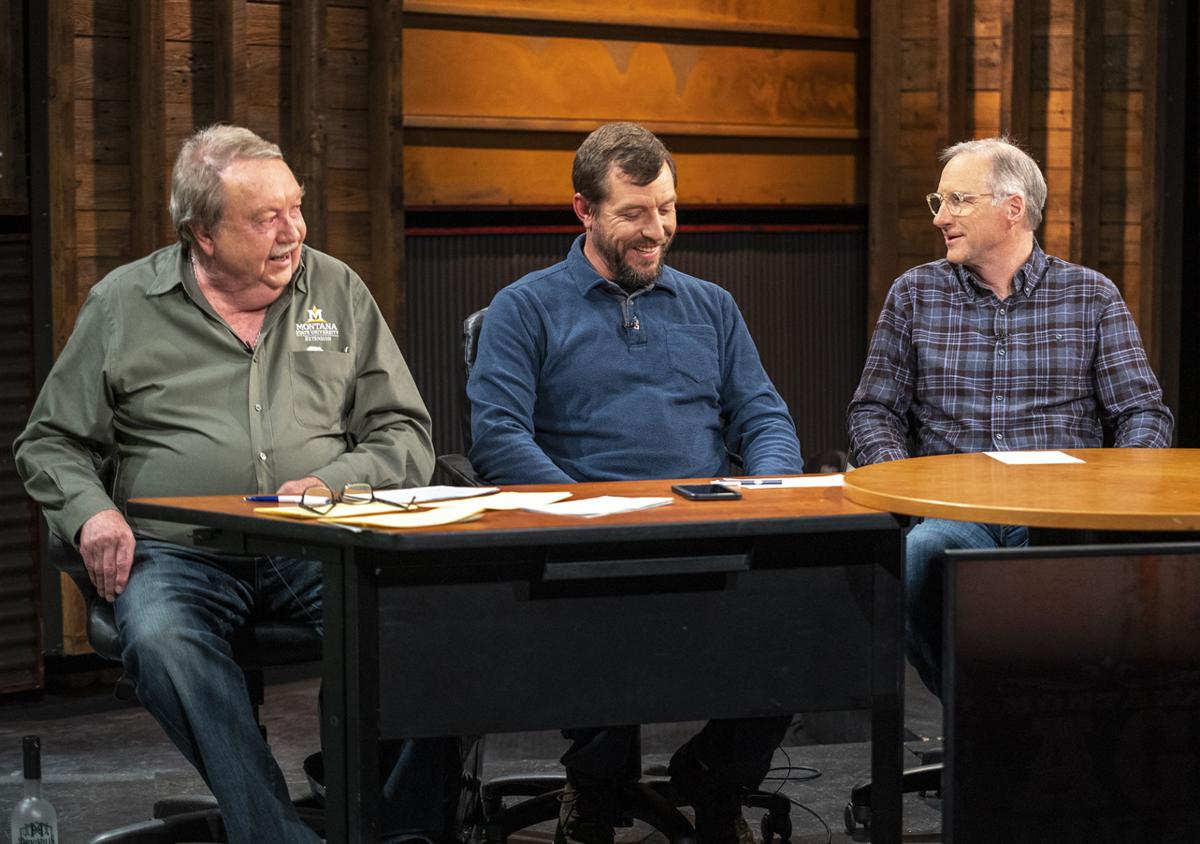 Jack Reisselman and panelists share a laugh during a broadcast of Montana AgLive. 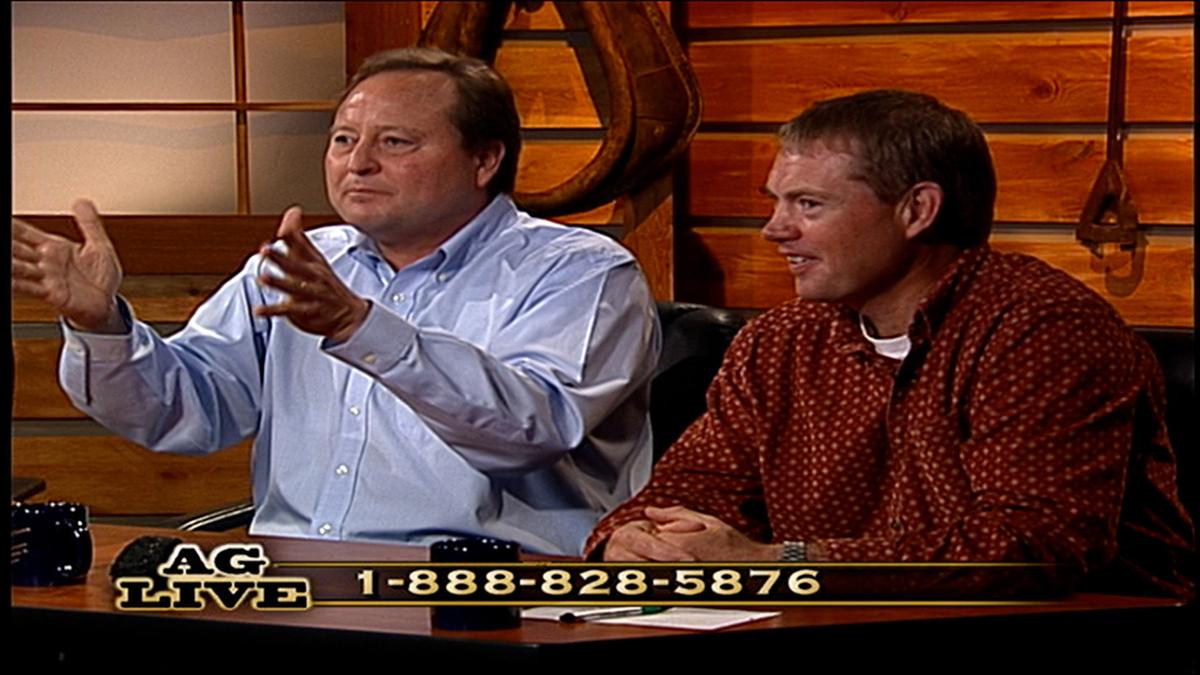 Former Gov. Brian Schweitzer appeared on the show while he was in office. Producers said he was one of their favorite guests because he engaged in straightforward talk about agriculture without showing any political partisanship.

Montana AgLive was conceived by Jack Reisselman, left, who patterned the show after a show in Nebraska called The Backyard Farmer. Hayden Ferguson, right, was the popular host of Montana AgLive for many years.

Hayden Ferguson was the popular host of Montana AgLive for many years.

Jack Reisselman and panelists share a laugh during a broadcast of Montana AgLive.

Former Gov. Brian Schweitzer appeared on the show while he was in office. Producers said he was one of their favorite guests because he engaged in straightforward talk about agriculture without showing any political partisanship.

It started in 1994. It had plenty of skeptics. And no one was sure if it would ever have an audience – or who that audience might be.

Welcome to the immensely popular Montana Ag Live, which is kicking off its 27th season on MontanaPBS TV this Sunday at 6 p.m.

Years ago it was the brainchild of Dr. Jack Riesselman. And he stole the idea from something he’d seen decades earlier as a grad student at the University of Nebraska.

“They had had a program called ‘The Backyard Farmer,’ a four-person panel that answered lawn and garden questions.” For the Montana incarnation, Riesselman added expert guests to the mix and expanded it past the backyard to include all of Montana ag.

(Nebraska’s “The Backyard Farmer” is in its 67th season and is the longest-running local TV show in the nation).

That first year, the old U.S. West corporation gave Montana PBS a $6,000 seed grant. “That was May 1994, and we’re still here,” Riesselman joked. By now, the show works with a mish-mash of $20,000 in grants, with MontanaPBS picking up the rest of the cost.

The program’s initial key to success was personal, he continued.

“We found someone that epitomized Montana ag, and that was Hayden Ferguson. He was a classic.”

With his distinctive voice and bigger-than-life personality, Ferguson for years was the show’s original moderator and the face and voice of Montana Ag Live.

He graduated from Montana State in 1950, became a nationally renowned scholar, and continued as the moderator of MAL for years, even after his retirement, and well into his 80s.

Starting March 21, 12 episodes are scheduled this spring, and seven for the fall.

The Montana Weed Control Association, discussing Montana’s 7+ million acres of state-listed noxious weeds, which will air on March 21, and the Montana Nursery and Landscape Association, airing on March 28.

Other topics to be discussed this season include shelter belts, truck gardens and lawns; hemp (Montana already has 50,000 acres of it); the Montana Beekeepers’ Association; the Montana Land Reliance (how easements can benefit ag and conservation); invasive species, from snails to wild pigs; the Emerald Ash Bore, a bug from China killing its way through America’s boulevard trees all the way to Boulder County, Colo., which will “spell disaster for Bozeman,” Riesselman said in an aside.

“All the boulevard trees in Bozeman, all the trees along Willson, are Emerald Ash. In Bozeman, the city (years ago) planted all ash. Now, an urban forester would want some diversity.”

Ag is a subject both serious and academic, but boy howdy does this crew manage some humor.

“Our panel members have a lot of fun doing the show, and people notice it,” Riesselman admitted.

“It’s not rehearsed at all. The beauty of the program is that it’s not just one topic. Questions are phoned in. It’s the off-the-cuff questions that give the show some liveliness.”

One favorite episode of Riesselman’s:

Bruce Loble, chief water judge for the Water Court of Montana was the show’s expert guest on state water rights.

As the judge he was, he came dressed for court, in suit and tie. “We made him take his tie off. We’re not exactly a suit-and-tie program,” Reisselman.

“Later, he was invited back. And we all whipped out clip-on ties. The first question we got from the phone bank was, ‘what’s with all the ties?’”

Sometimes a show has serious results. Riesselman recounted a show with the guest discussing rural school safety. He recounted an tale of a student stealing a school bus in Lincoln, Neb. Unknown to law enforcement, he was on his way to Omaha, but aerial patrols couldn’t find him due to Lincoln having 250 school buses. The panelist suggested painting school bus ID numbers on their roofs, now a common practice nationwide.

Back to the Montana Ag Live humor:

One week the show included a rodent control specialist. He laid out his taxidermied prairie dogs and ground squirrels; one panelist had tied fishing line to the leg of one of the dead animals and, on live TV, “walked” it across the table.

An episode on wild mushrooms had Riesselman bringing a skillet and a bottle of white wine to the studio to cook on air the subject of the episode.

These ag experts are half the success equation; the rest is the call-in audience.

A bank of three phone operators fields questions, winnowing out the boring, the commercial pitches and the nutcases.

How have the questions changed over the years?

“Climate change. It wasn’t even on anyone’s radar 27 years ago.

“And forest fires. And water problems. When I moved out here years ago, the Gallatin River was fishable all year. Now, no water by August. It’s criminal.”

What’s the most controversial?

If you tune in on Sunday nights, but haven’t heard from the UFO/Tin Hat Brigade, there’s a reason.

“Our three phone screeners take out the really crazy questions so they don’t even get to us,” Riesselman explained.

The most radical, crazy comments come from where? “The Missoula area.”

“Yes. On manure. We had a show on manure and a caller wanted to know how hot rabbit manure was. Who knows? No one on the panel did, but one of the guys said he’d find out and get back to the caller. That was a ‘stump the panel’ moment.”

And by the way: Horse manure is not that good. What it’s good for “is spreading weeds,” Riesselman added. “People call and ask why their pasture is full of weeds. Usually they’re feeding non-certified, weed-free hay.”

What questions are you asked every season?

“What can I do to get rid of the ‘fairy ring’ in my lawn? Nothing.

“Why are the needles on the inside of my tree dying? Because it’s natural.”

“We are constantly looking for topics that are fun and entertaining. We try to be diverse; a lot of urban folks are getting educated on Montana ag.”

Montana Ag Live has a reputation beyond the state borders.

Riesselman recounted accompanying his wife to Maine for her job.

“I told her I wasn’t even from Maine and she had mistaken me for someone else.” Well, she hadn’t. Her family had a vacation home in Big Sky, and her husband so loved Montana Ag Live he refused to go anywhere on Sunday nights until he had watched the program.

Riesselman is still moderator, “for the foreseeable future,” he said. “I’m not walking out the door yet, but there may come a time to turn it over to someone younger, someone more in tune with whatever current ag trends.”

Started on next year’s topics yet?

“We are always looking at next year. Next year, we may take more of a look at conservation.”

Each week’s show is rerun the next week at 11 am on Sunday.