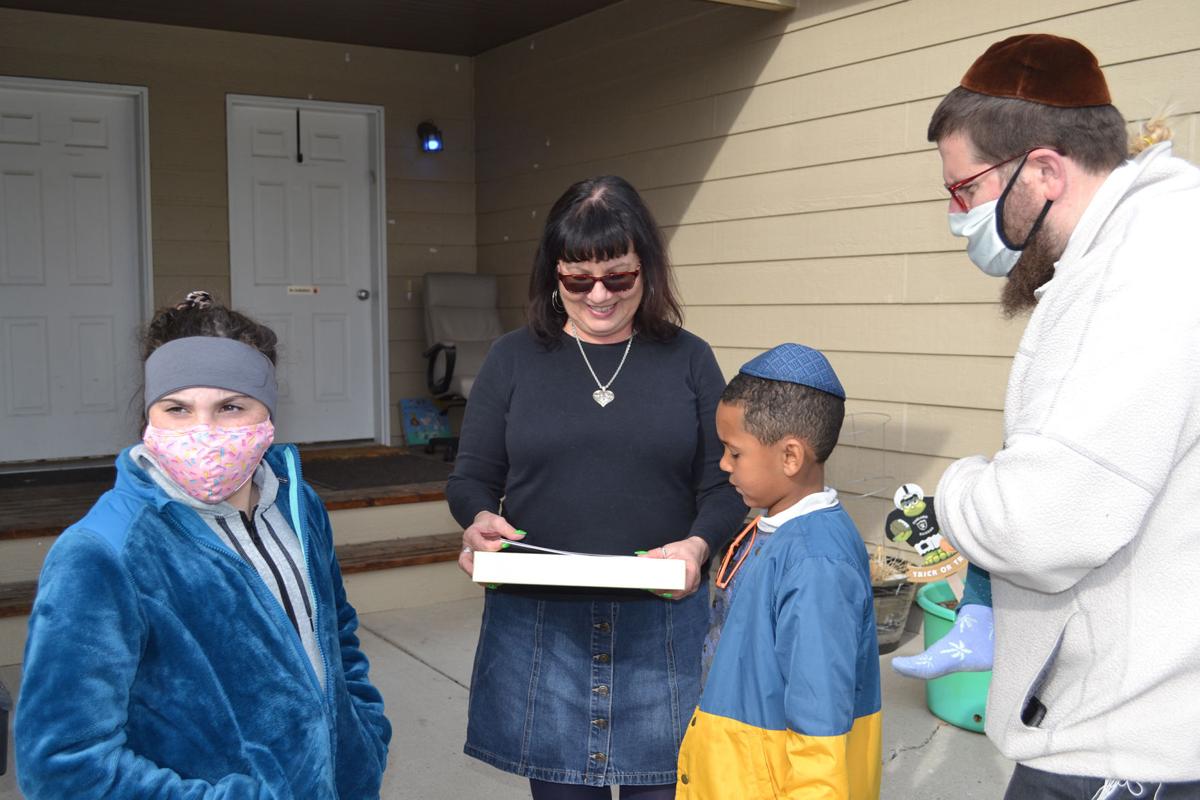 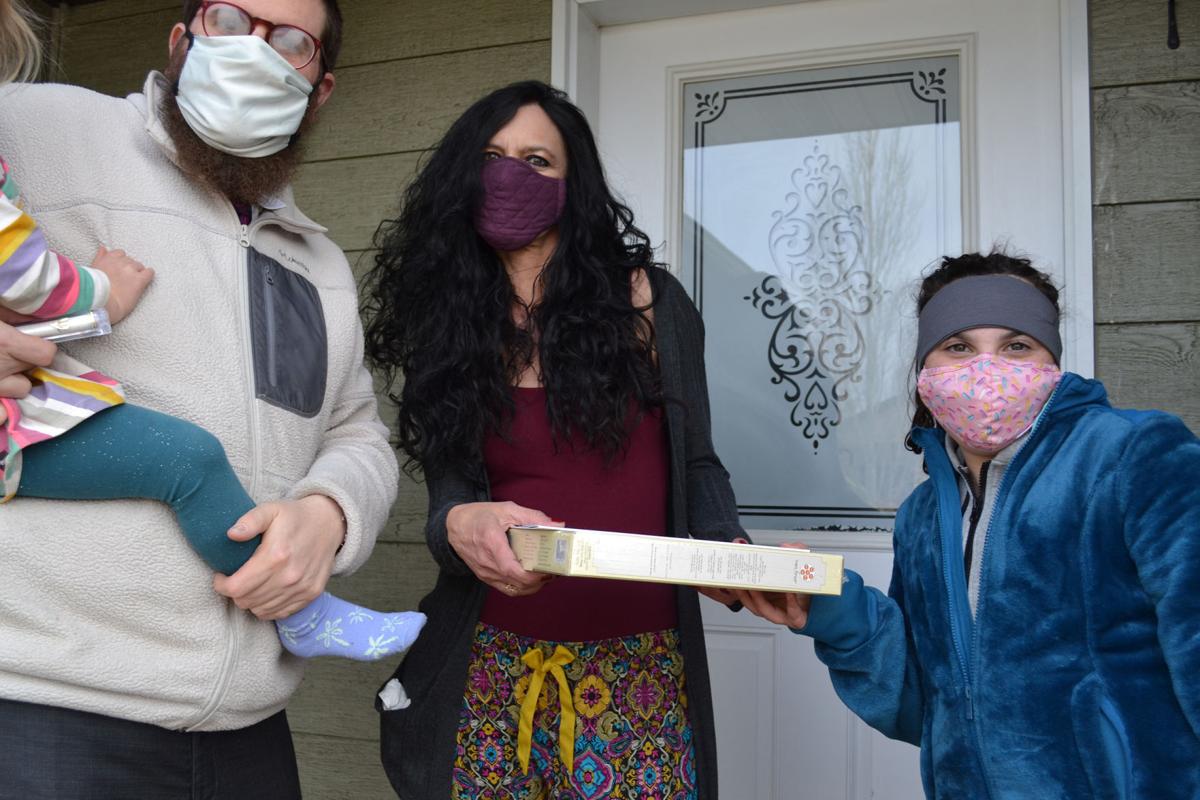 It was Monday afternoon in Belgrade’s River Rock subdivision and Rabbi Chaim Bruk was in the midst of a ritual dating back 3,000 years.

It was almost Passover, or Pesach, and the Belgrade News had been invited along as Bruk brought ritual boxes of matzah to a couple of Jewish families in the subdivision.

About 15 years ago, Bruk came out to Montana as a rabbinical student. Now, he’s its first Chasidic Lubavitch rabbi, and opened the Treasure State’s first Chabad Center, sort of a ‘headquarters’ to help Montana Jews be, well, more Jewish.

In 2014, Missoula got the state’s second Chasidic Center and rabbi. Kalispell got its third in 2018.

First, a note on what is the Chasidic Lubavitch:

According to Bruk, some 300 years ago in Poland, the Baal Shem Tov was a Jewish mystic and healer, now recognized as the founder of the Chasidic Lubavitch. He emphasized a direct connection the Divine, worship and a daily life full of joy and prayer and the mystical study of the Hebrew language.

Three centuries later, Brooklyn, N.Y., is the epicenter of the orthodox Lubavitch movement, and Montana and Wyoming were two of the last “Wild West outposts” to get Chabad Centers and the resultant outreach to unaffiliated Jews. Their own literature states that Chabad exists to “provide for the spiritual and material needs of all Jews.”

In Gallatin County, this Saturday night at exactly 8:32 p.m. marks the start of the eight days of Passover.

Bruk is at this Belgrade door because bread – leavened and unleavened – both play a part in the story of Passover.

The book of Exodus recounts the story of the Jewish people enslaved in Egypt. God tells Pharaoh to let His people go. Pharaoh says no, then yes, then no again. During all of this back-and-forth, God sends 10 Plagues to visit Egypt, and the final one, the killing of every firstborn male, strikes Egypt – but not its Jewish slaves.

(Exodus recounts that earlier, God ordered all Jewish households to mark their doorposts with the blood of a lamb, and they were “Passed Over.” Hence the name of this holy day.)

Passover “is an incredible point. It marks the point of Israel’s journey from Egypt to the Red Sea to (God giving the Torah) at Sinai,” Bruk explained.

Bruk said he personally hand-delivered matzah boxes this year to 150 families around the state, and had the help of rabbinical students for another 150 families. And that’s from Three Forks to Whitehall, Townsend to Basin, and then Roundup to Belt and every corner of the Treasure State.

“By Wednesday night we will have delivered to 500 homes,” Bruk said.

Why unleavened matzah? Because when the Jews fled Egypt, they left in such a hurry that their bread had no time to rise. And the Bible commands that matzah be eaten every year on the first night of Passover, to commemorate that flight from Egypt.

“We are Biblically mandated to eat matzah, and no leaven at all for the eight days of Passover,” he explained.

Matzah is called “the poor man’s bread, and the fact that it remains flat symbolizes humility – that there is a cause bigger than us.

“Eating matzah on Passover is healing and faithful,” he continued. “Eat the same thing before Passover and it’s just a cracker.”

One preparation for Pesach is the ritual top-to-bottom cleaning of all leaven from the home to memorialize the detail that the Jews left their Egyptian homes in such a hurry that their bread had no chance to rise.

This gets to be quite a chore: Finding hidden leaven, or “chametz” from the attic to the basement is not simple. Behind the bookcase; in the closet; cleaning the pans that touched leaven.

Just before Passover, a final, ritual house inspection is conducted. Bruk added that parents will hide 10 pieces of bread, “a spiritual treasure hunt,” wrapped in foil, giving the children something to “find.”

According to Jewish mystics, leaven is a metaphor for vanity and arrogance, two attitudes that should be gotten rid of for Passover.

After all the chametz is removed from the house, then there’s the problem of leavened foodstuffs that can be saved for later: Those are “sold” to a non-Jew, who will “sell” them back after Passover.

How does one pick a Gentile to sell his chametz to? “You pick someone you can trust to sell it back to you after Passover,” Bruk joked.

And just before Passover all the chametz is burned. Where? “Right in front of my house,” Bruk said.

Passover “teaches us to minimize the leaven in our lives,” Bruk continues. “Humility. To take it seriously.

“Passover is one of those time to think, ‘How am I living my life?’ ... Arrogance ... the spirit of Passover, we are to rid the leaven from our hearts and souls. A narcissist can’t reflect.”

Montana has about 5,000 Jews. It is a population of a few far-flung people in a state 14 times the size of Israel. This population has grown exponentially, just like the population in Gallatin County.

Normally, Bruk would deliver 250 Passover matzah boxes around the state. With COVID, Bruk guessed there might be a bigger need this year; he ordered 500 boxes. He was right.

2020 was a dumpster fire of a year. COVID changed everything for everyone. And worship in the Gallatin Valley was no exception. Bruk held High Holy Days in the outdoors, and “People came in droves.”

Will Zoom calls replace in-person worship? “I don’t think so,” Bruk admitted, since part of worship is the being-with-other-people. In fact, he believes that COVID may actually make more people yearn for more spiritual depth, more formal worship to their lives.

His own father, in Brooklyn, N.Y., recuperated from COVID; his uncle died from it.

Bruk recounts a kids’ song his children sing about the coming of the Messiah: “We Want Moshiach now! We want Moshiach Now!!”