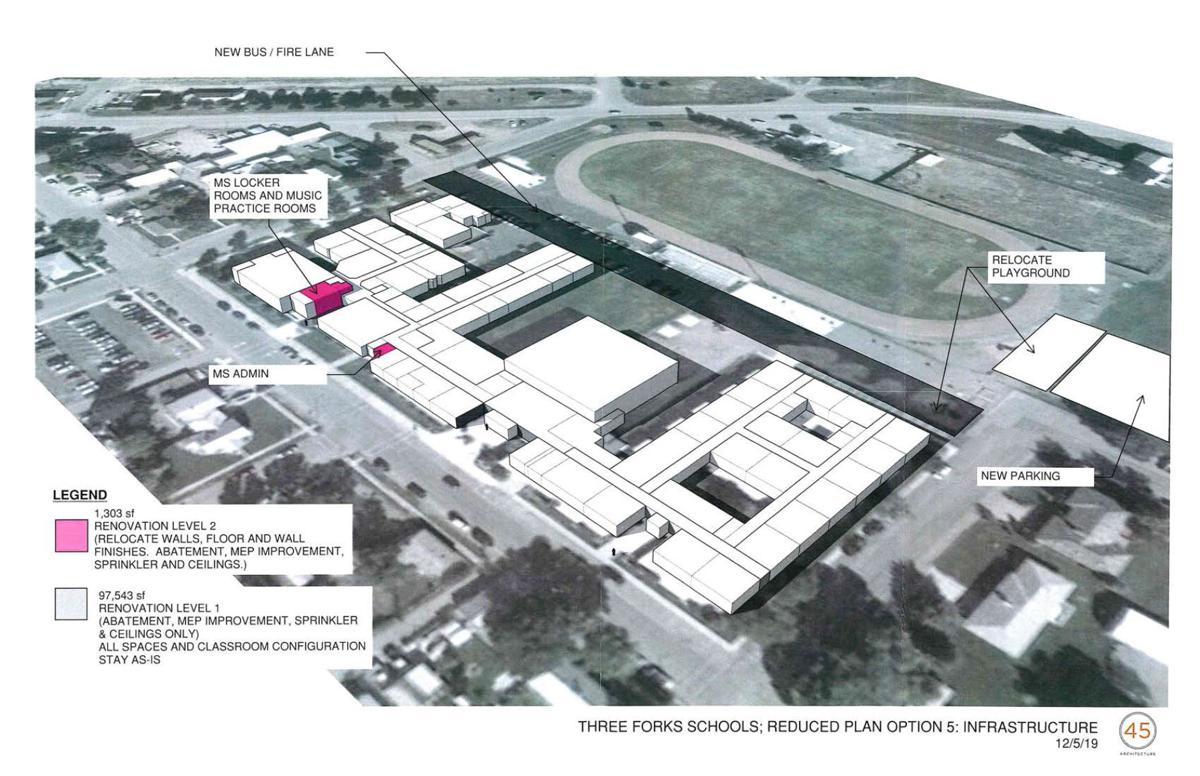 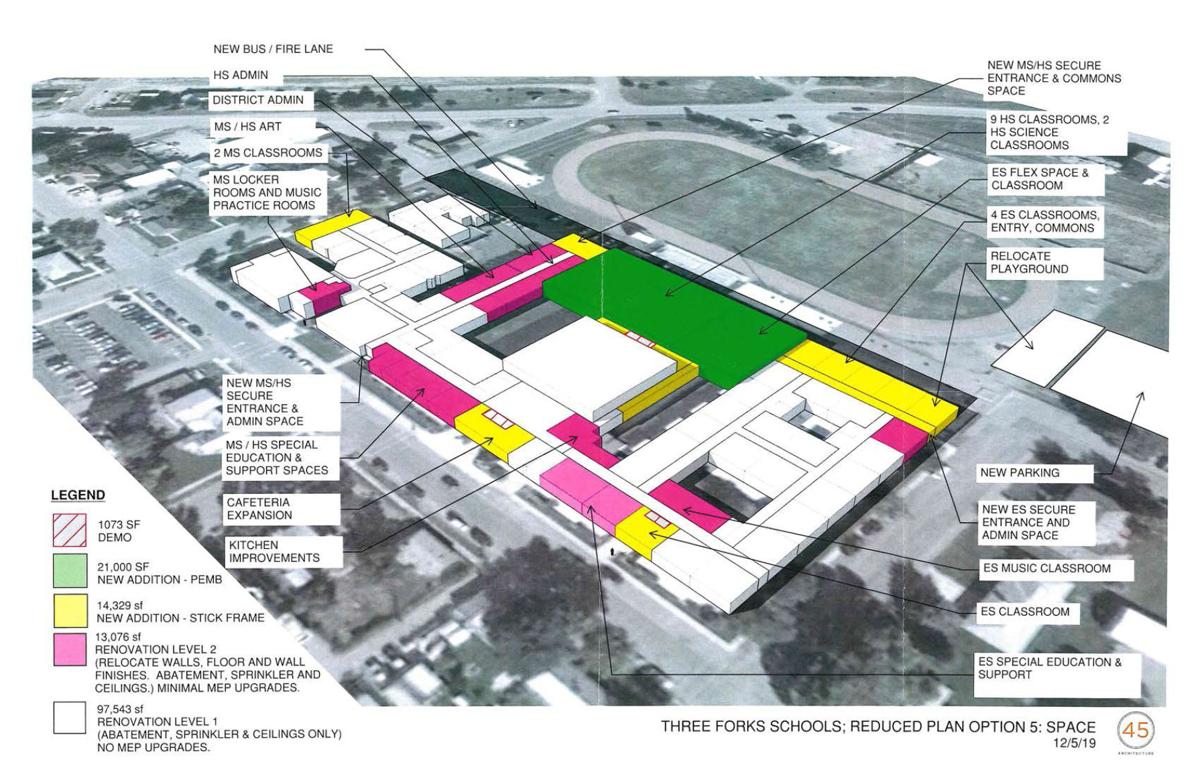 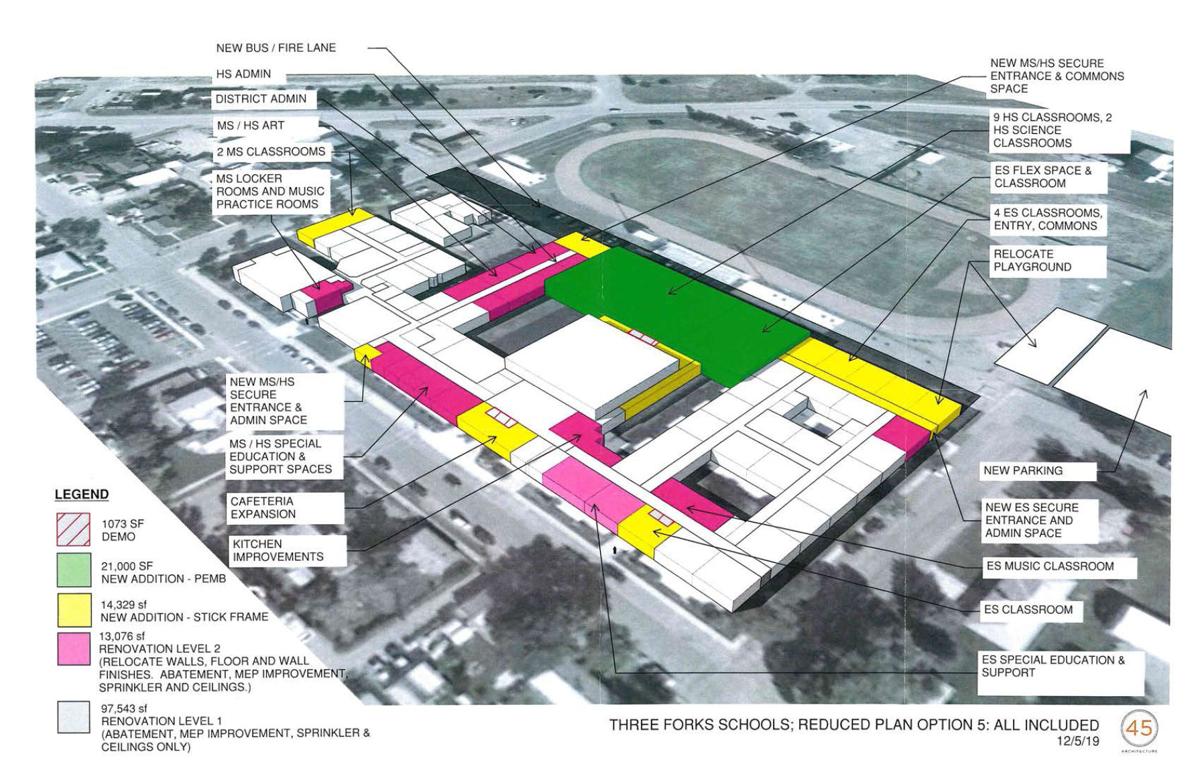 Superintendent Jeff Elliott spent one day last week in the tunnels under Three Forks High School after steam pipes burst and “melted” the Sheetrock in an English teacher’s classroom.

Unfortunately, he said, such happenings aren’t uncommon in the school that hasn’t had any major upgrades since it was built in 1952.

“At least once a month – sometimes more often – we have to fix something that has gone wrong,” said Elliott of the decaying infrastructure at school. “It’s a little bit frustrating spending so much money on maintenance, but when a building is that old, it’s run its course.”

Meanwhile, the student body of Three Forks schools is growing at a rate of about 6 percent per year. There are 770 students in the district now, all of them on the single campus that encompasses the elementary, middle and high schools. Space is at a premium: Three teachers share the Health classroom, three English classes are being held in the auditorium, and class sizes are growing – some have more than 30 students.

“We need to get those numbers down,” Elliott said. “That’s not an effective classroom environment.”

The district likely will purchase a pair of two-classroom portables in the spring for $300,000, which will help ease the space crunch in the short-term, but a longer-term solution is necessary, Elliott said.

In May 2018, voters turned down a $23 million bond issue that would have funded, in part, 13 additional classrooms, an expanded library and a new elementary gymnasium. With that defeat in mind, the district hopes to come up with a new proposal that will be both palatable to voters and meet what Elliott calls the three critical “tenets” of the bond – Safety, Infrastructure and Space.

Two less expensive options are being floated for discussion, and they – along with the all-encompassing option preferred by administrators and the board – were posted on the district website last week.

The three options and their preliminary cost estimates are:

• A $26.3 million “All Included” proposal, which would add new classrooms and other amenities, while also fixing the MEP issues.

Elliott said the district’s architects have been working on ways to meet all the schools’ needs while keeping costs down. For example, they are proposing steel rather than “brick and mortar” buildings; the full-size gymnasium that was part of the 2018 proposal has been eliminated.

While such compromises are possible when planning new instructional spaces, the infrastructure problems are harder to scale back.

“We’ve really cut back on things, but the mechanical, electrical and plumbing are so obsolete,” Elliot said. “We spend so much on infrastructure trying to fix things.”

Even though school board members are well aware of the maintenance issues at the school, their “eyes were opened” two weeks ago when they toured the facility, he added – and that was even before the steam pipes burst last week.

After the first of the year, the district will decide which bond proposal to put forth, finalize its price, provide voters with detailed figures about the financial impact per household, and set a firm date for the election, probably in June. At the current growth rate, the “All Included” plan would accommodate the district’s needs for 15 years, Elliot said.

The board is encouraged that Bozeman, Belgrade and Manhattan school districts all have passed bond issues recently, and is hopeful that Three Forks will follow suit. Elliott noted that the project only will become more expensive the longer it is put off, due to continually rising construction costs.

“We’re excited about (our proposal), but also a little apprehensive,” he said. “If the bond fails, we’ll have to start from ground zero again.”

Detailed information about the proposed options and cost estimates are available at https://www.tfschools.com/o/three-forks-schools/page/bond-proposal-options-19-20.