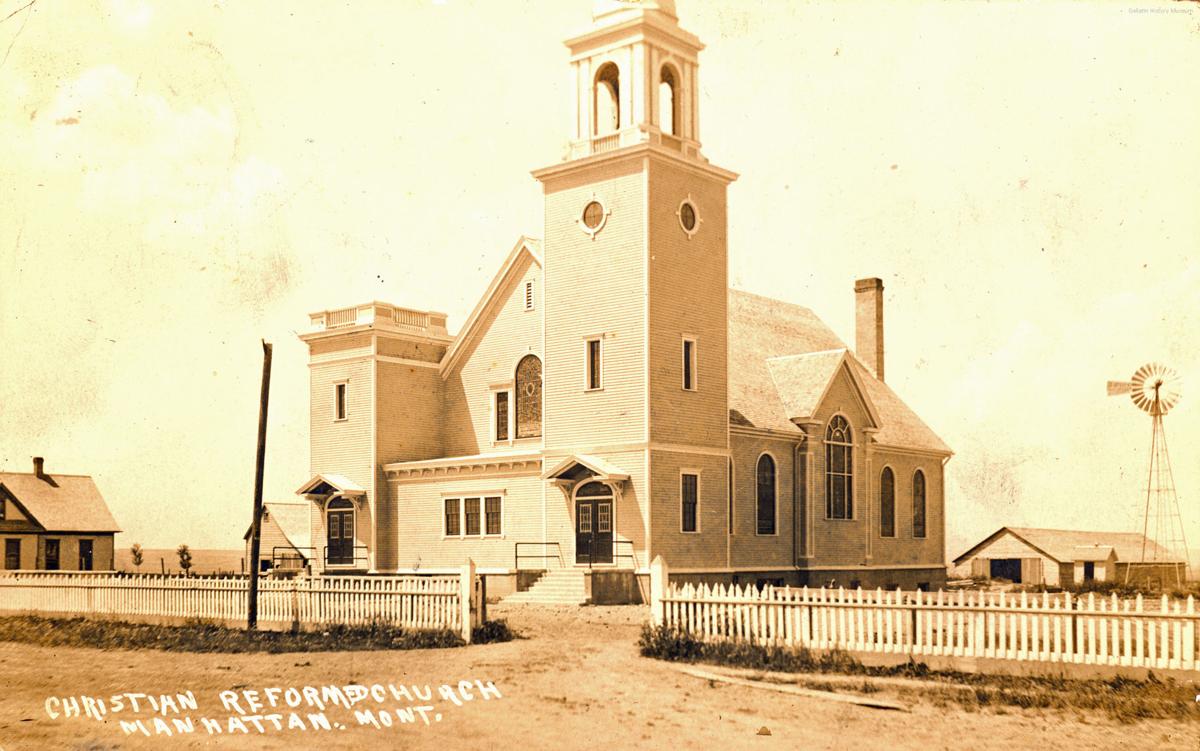 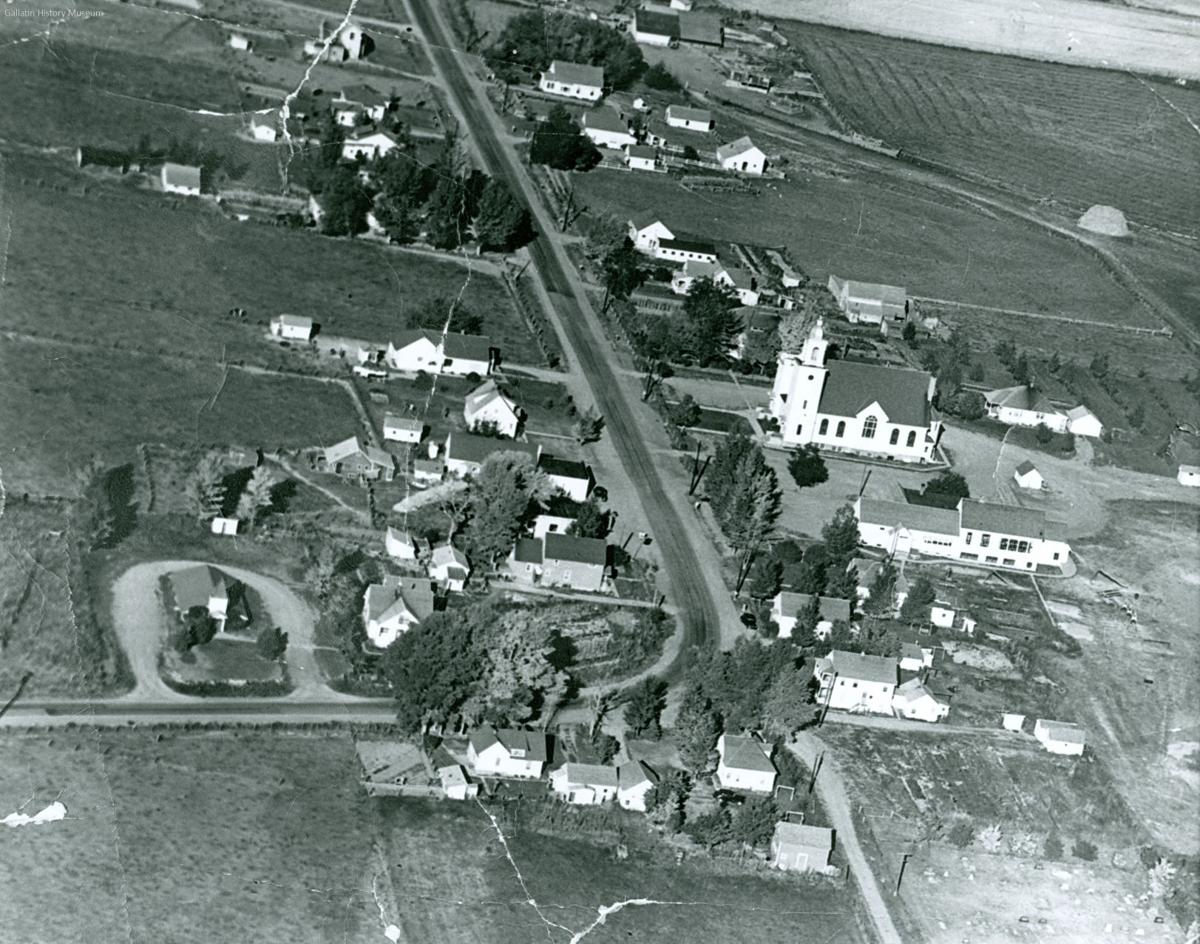 Aerial shot, early 1950s, Churchill. Shows cemetery, church, and school (burned down in 1957). On the back is written “Churchill.” This a photo taken in a westerly direction along the main road through Churchill. In the lower right hand corner is a cemetery. Major buildings on the right side of the road are the school and church. On the left side are houses. In the distance are hay windrows in fields. In several areas are lines that probably came from a cracked original print. (Image is not for sale.)

Aerial shot, early 1950s, Churchill. Shows cemetery, church, and school (burned down in 1957). On the back is written “Churchill.” This a photo taken in a westerly direction along the main road through Churchill. In the lower right hand corner is a cemetery. Major buildings on the right side of the road are the school and church. On the left side are houses. In the distance are hay windrows in fields. In several areas are lines that probably came from a cracked original print. (Image is not for sale.)

Manhattan Christian Reformed Church is a graceful and recognizable landmark, sitting at the highest elevation in Churchill, the community so named for the “church on the hill” that was built more than 100 years ago.

Manhattan CRC shares its campus with Manhattan Christian School and Bethel Christian Reformed Church, which is home to a congregation formed in 1960 when Manhattan CRC could no longer accommodate all its members.

Though currently home to a sizable and healthy congregation, longtime members say the church is no longer the predominant, binding force of the community that it once was. In today’s more mobile society, many residents of Churchill are not affiliated with the church that was built more than 100 years ago to serve Dutch settlers living to its north and south.

Religion was important to the Dutch immigrants who settled in the western Gallatin Valley in the late 19th century and beyond. Most were attracted by the opportunity to farm fertile, irrigated land that had been found to be ideal for producing superior malting barley. Word of those opportunities were spread not only by word of mouth, but by a Presbyterian minister of Dutch heritage named Andreas Wormser.

According to a 1989 article in “Montana: The Magazine of Western History,” the Rev. Wormser also worked as an agent for the West Gallatin Irrigation Company. He was responsible for recruiting Dutch farmers to come to Montana.

“Reverend Wormser’s timing could not have been better,” the article states. “The number of emigrants leaving the Netherlands for America in search of work or land was on the rise again. Emigration was predominantly from rural areas, where jobs in agriculture had diminished due to mechanization and modernization and where there was no alternative industrial employment.”

For a time, separate Presbyterian congregations served Dutch settlers near present day Churchill and in Manhattan, but a “general dissatisfaction with church life arose and agitation began for the establishment of a congregation of the Christian Reformed denomination,” according to “A Goodly Heritage,” a history by the Churchill-Amsterdam Historical Society, published in 1974. Not only did parishioners wish to consolidate their congregations, but some were dissatisfied with Presbyterian services conducted only in English language. In 1902, an Iowa missionary from the Christian Reformed Church visited the area and pushed for consolidation.

“In 1903, nineteen families and five single men, from both north and south, founded a Christian-Reformed congregation,” states the Magazine of Western History article. The congregation began meeting under the leadership of the Rev. Mr. Stuart, and the community grew up around the church.

By 1909, the congregation comprised over 80 families, and it became clear that the facilities were inadequate.

“One of the group’s first constitutive acts concerned building a church on Church Hill in the center of the settlement, halfway between north and south,” states the Magazine of Western History article. “The church was to be a clear beacon, a guiding light that would turn the dispersed settlers inward upon themselves, inspiring a sense of their own vital center and their tradition. At the same time, the church would also serve as a demarcation, setting the community apart from its American environment.”

Plans for constructing a building to seat 600 got underway, with a budget of $10,000, according to “A Goodly Heritage.” The final total ended up being closer to $25,000 after adding in the price of the pews, windows and architectural services. The organ cost $1,500 and the bell $160.

The controversy over the cost of the windows is still talked about today. According to former pastor Jack Huttinga, a shipment of stained glass windows from the Netherlands had gone unclaimed and was sitting in the harbor in New York. The pastor at the time learned about them, decided to take advantage of the deep discount, and purchased them for the sum of $700, according to “A Goodly Heritage.” The pastor’s unilateral decision was a source of controversy for decades.

Though it would take the congregation more than 30 years to pay off the initial construction loan, more expensive capital improvements were yet to come. In 1991, a $447,000, 12,000-square-foot addition was built, comprising a large Fellowship Hall and modern kitchen upstairs, with a classroom wing in the basement. Other modern additions include equipment capable of livestreaming services.

Manhattan Christian Reformed Church once was the “glue of the community,” Huttinga says, but its role has changed as life has become more mobile. He says Churchill has become more of a bedroom community to Bozeman, and only 20 percent of the area’s residents now belong to the church.

Hank Flikkema, who has been attending the church for 72 years since immigrating to Churchill with his family 1940s, and Eleanor Denhartigh who grew up attending Manhattan CRC, agree with Huttinga that the role of the church has changed, but they say it is no less important to its members – which include descendants of its founders – than it ever has been.

Huttinga noted that the church has extended its outreach beyond Churchill’s boundaries, with members participating actively in the ministry at the Gallatin Valley Detention Center, Love INC and the ZoeCare Crisis Pregnancy Center. Manhattan CRC and Bethel CRC continue to actively support Manhattan Christian School, though the school is managed by an independent board.

Despite societal and demographic changes, Denhartigh says congregants’ care for one another has remained constant through the decades.

“This is a safe place,” said Denhartigh. “Our care for the community is huge.”