Belgrade sophomore Mackenzie Turner boots a goal kick during a home match this past season. 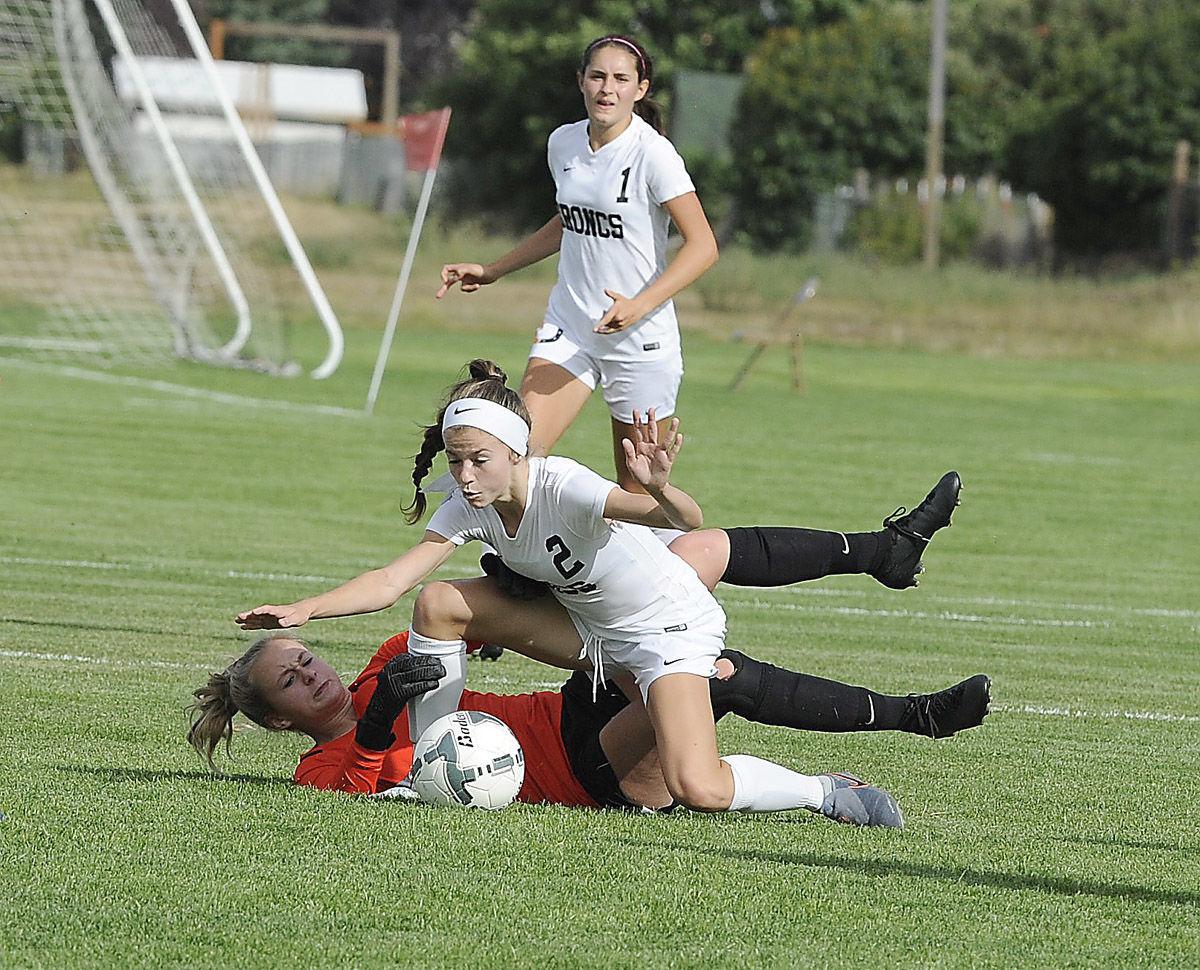 Belgrade sophomore McKenzie Turner battles to make a save during a match against Billings Senior on Sept. 13.

Heading into the uncharted waters of a new classification, no one really knew what to expect this fall.

Belgrade’s soccer teams had experienced plenty of success at the Class A level, but moving to AA was certainly expected to provide many challenges.

While the boys didn’t win a match, the girls were very competitive during 2-8-3 campaign. A primary reason for that success can be attributed directly to keeper Mackenzie Turner.

“I think she came in ready to prove something,” first-year Panthers coach Carl Bridwell said. “I think she was really excited about getting to face off against double A talent and show that she can make some incredible saves, and we saw that game in and game out.”

In 13 matches the sophomore tallied 164 saves out of 189 shots on frame — a save percentage of 86.7 percent — and the mark is believed to have set a single season state record in AA.

The state record for boys is 155, which was set by Helena High’s Carl Weiss in 1995, but the Montana High School Association does not list a record on the girls’ side.

Regardless, it’s an impressive feat for Turner in her first season as the Belgrade’s fulltime keeper.

“I think without a shadow of a doubt, Mackenzie not only save us tremendously a lot of times, but was also such a major influence. She won’t talk about it personally, but she is very vocal and very demanding because she’s the kind of goalkeeper that want’s to be doing everything,” said Bridwell. “She took losses hard. She didn’t want to lose, so the way she did that game in and game out, she deserves that record.”

While Turner shined in goal, she was quick to credit teammates for Belgrade’s overall success. She also entered every match with a single mindset.

“I didn’t want to give goals up. But if I did I had to reset and make sure that I got the next one,” Turner said. “I think as a team our mindset going into each game was to give it all and put everything out there on the field. I definitely feel like we did that. We played with a lot of heart.”

Turner helped set up a couple of Belgrade’s first goals in AA on goal kicks. She also posted three shutouts in net and only allowed one team — defending state champion Billings Skyview — to score more than three goals in a match.

The Panthers scored just 11 goals during the season, and were shut out six times. But Turner allowed the team to remain in contests thanks to double digit saves in 10 matches.

“In single A we needed a goalkeeper to be on their toes for 50 minutes and then be ready to make a big save,” said Bridwell. “We needed her time and time again (in double A), and that has been just awesome to have her aware and constantly on her toes.”

Turner also faced three penalty kicks and made a save early in the season in a 2-0 road victory against Great Falls.

“I personally love PK’s. I like the pressure that the other person is facing and how it’s not all on me, but I have the chance to get it,” said Turner. “It’s a really cool thing for me.”

Turner is following in the footsteps of older brother Luke. He won a pair of state championships in Class A for Belgrade and graduated last year with the MHSA career record for shutouts with 16. The previous record had been 13.

“I’ve always looked up to him. He’s my older brother and setting that state record was awesome,” Turner said. “I think it gave me confidence because when he stepped on the field he was a confident player. I was like, ‘Wow, I can do that too.’ And yeah, he’s gave me pointers on PK’s and tips on what to work on. We’ve trained together, so that’s amazing to be able to feed off that and use what he’s taught me.”

So what does it mean to have set her own record?

“I think it’s awesome because I got to see all my hard work pay off because I train a lot in the offseason and even during basketball,” said Turner. “Sometimes I play Thursday, Friday and then go train in Billings on Saturday or Sunday. It’s awesome to see all of that pay off, especially moving up to double A.”