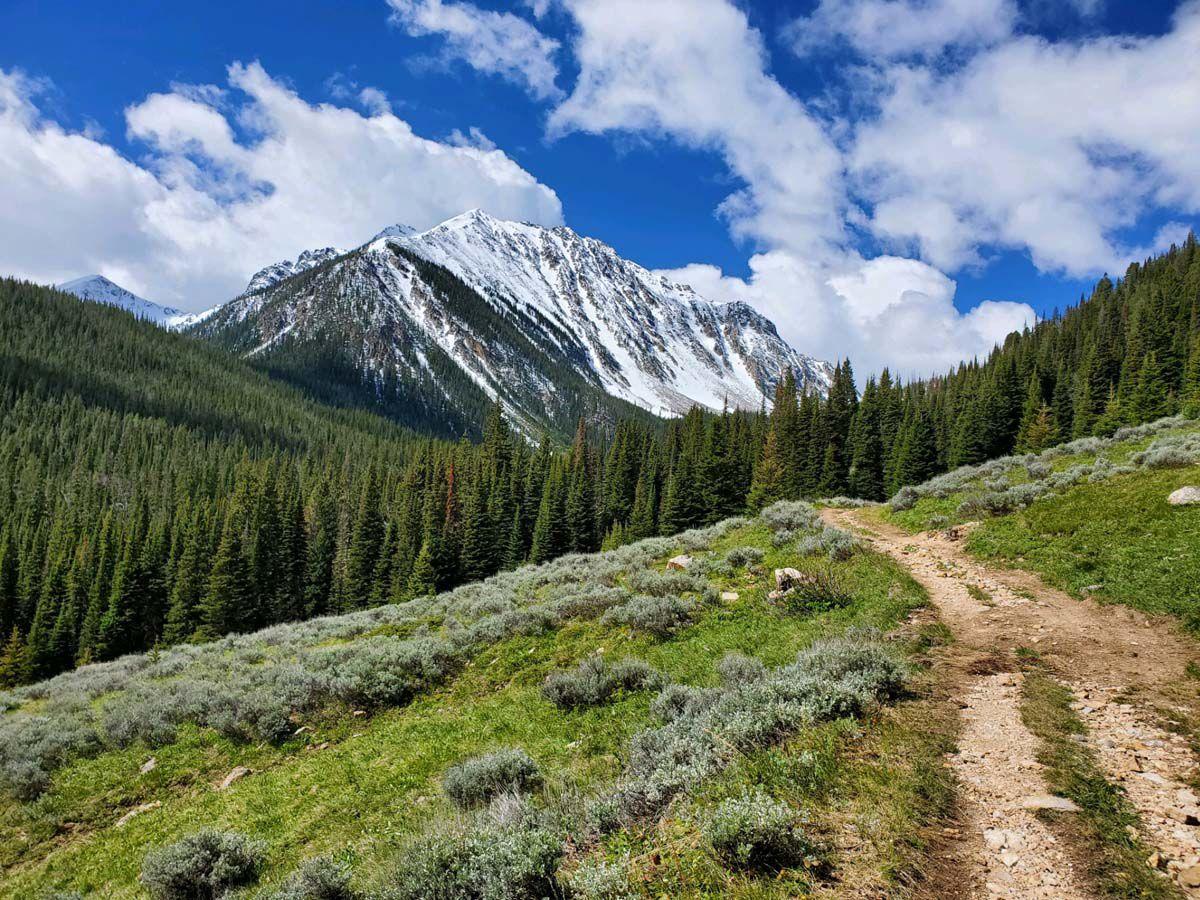 A snow covered mountain peak can be seen in the distance while hiking up to Bell Lake southwest of Harrison.

While hiking up the trail I was surprised that it was rated as difficult. Yes, it was a steady incline over the first two miles, but I’ve traversed worse.

The final 1.5-miles to Bell Lake, well that’s where the trail earned its rating. It’s a steep climb on that final push to the top, but well worth the effort for those who want a challenge.

After several days of rain I was hesitant about doing the hike, which I had planned the week before. Still, knowing it would be wet and muddy, I decided to go for it.

The lake is located southwest of Harrison and is accessed by Potosi Road, a dirt road that is in pretty good condition although there are some bumpy spots. There were also two large areas of standing water on the road following the recent rainfall, but my car had no trouble getting through them.

The Potosi Campground is about five miles down the road on the left, and the trailhead is about another 2.5-miles.  There will be a sign for Bell Lake (the road to the left) and Granite Lake. There are plenty of places to park once there, but I opted to go back down the road a bit to a campsite and parked there.

The wide trail climbs from the start on the north side of South Willow Creek. While the creek is out of view for much of the hike, the roar of the water can still be heard.

The trail was dry for the first mile or so, but as the elevation grew water began to appear. There were several small creeks that formed across the trail due to runoff, and the majority were easy to cross by hopping rocks.

At the 2-mile mark, however, about 16-feet of the trail was flooded. It was only a couple of inches deep, but the goal was to keep my feet dry. Luckily I was able to cross the water via some trees and branches that other hikers had placed there to get over the hazard.

While there were small patches of snow along the trail up until that point, at the 2.2-mile mark fresh snow began to completely cover the trail. It was only an inch or two deep, but that’s also when the dramatic incline began. The snow made for slippery footing and soon my shoes were soaked through.

The trail briefly flattened below the lake where I came across the Bell Lake Yurt, a 20-foot structure for adventurers to rent during backcountry skiing and snowboarding trips. From there the trail consists of a few more switchbacks up to the lake.

A thin layer of ice still covered much of the lake, and some snow lay on top of it in areas, but things were melting quickly, and that included the snow on the trail.

The return trip was wet, muddy and slick, although in a few weeks the trail should be dry all the way to the lake.

In addition to hikers, the trail is also accessible to horseback riders and motorized vehicles measuring less than 50 inches in total width for the first 2.5 miles.

How to get there: Take Hwy. 287 south to Harrison. Midway through town turn right on Norwegian Creek Road, then turn left on Potosi Road. Look for the sign for Bell Lake (and Granite Lake) about 7.5 miles down the dirt, and sometimes bumpy, road.

— Dan Chesnet is the sports editor of the Belgrade News and can be reached at dchesnet@belgrade-news.com.