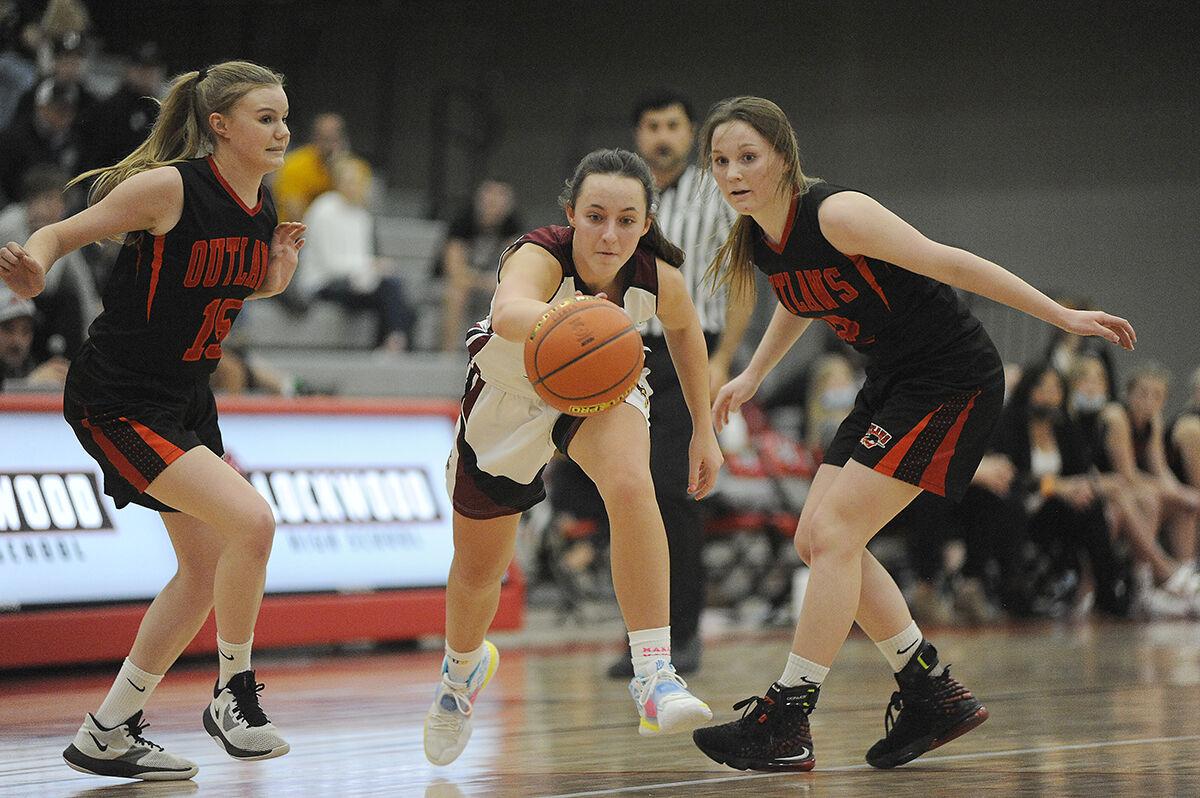 Manahttan Christian's Taylor DeVries tries to maintain control of the ball after dribbling between Roy-Winifred's Megan Bergum, left and Trinity Edwards Saturday in the consolation game of the state C tournament in Billings. 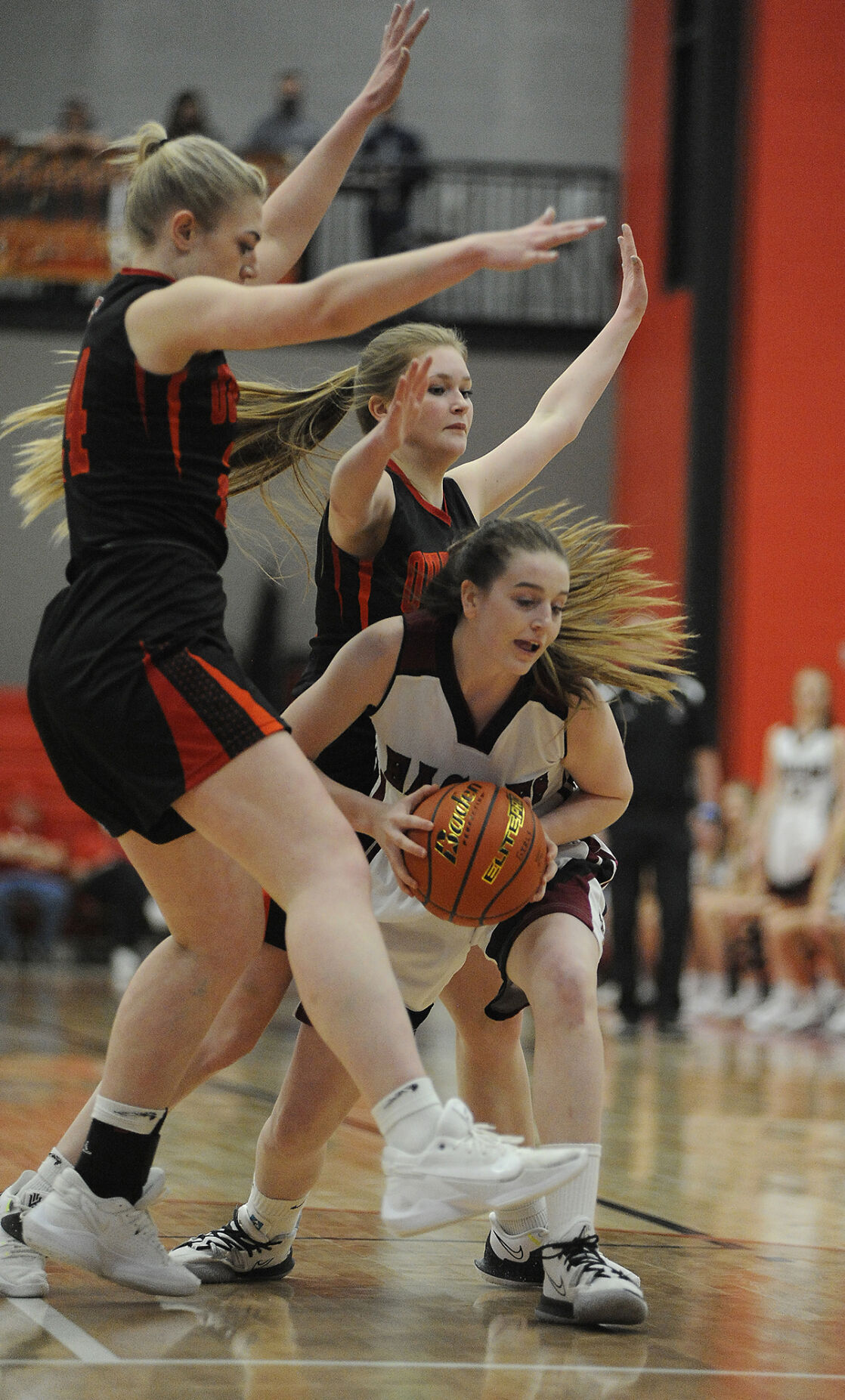 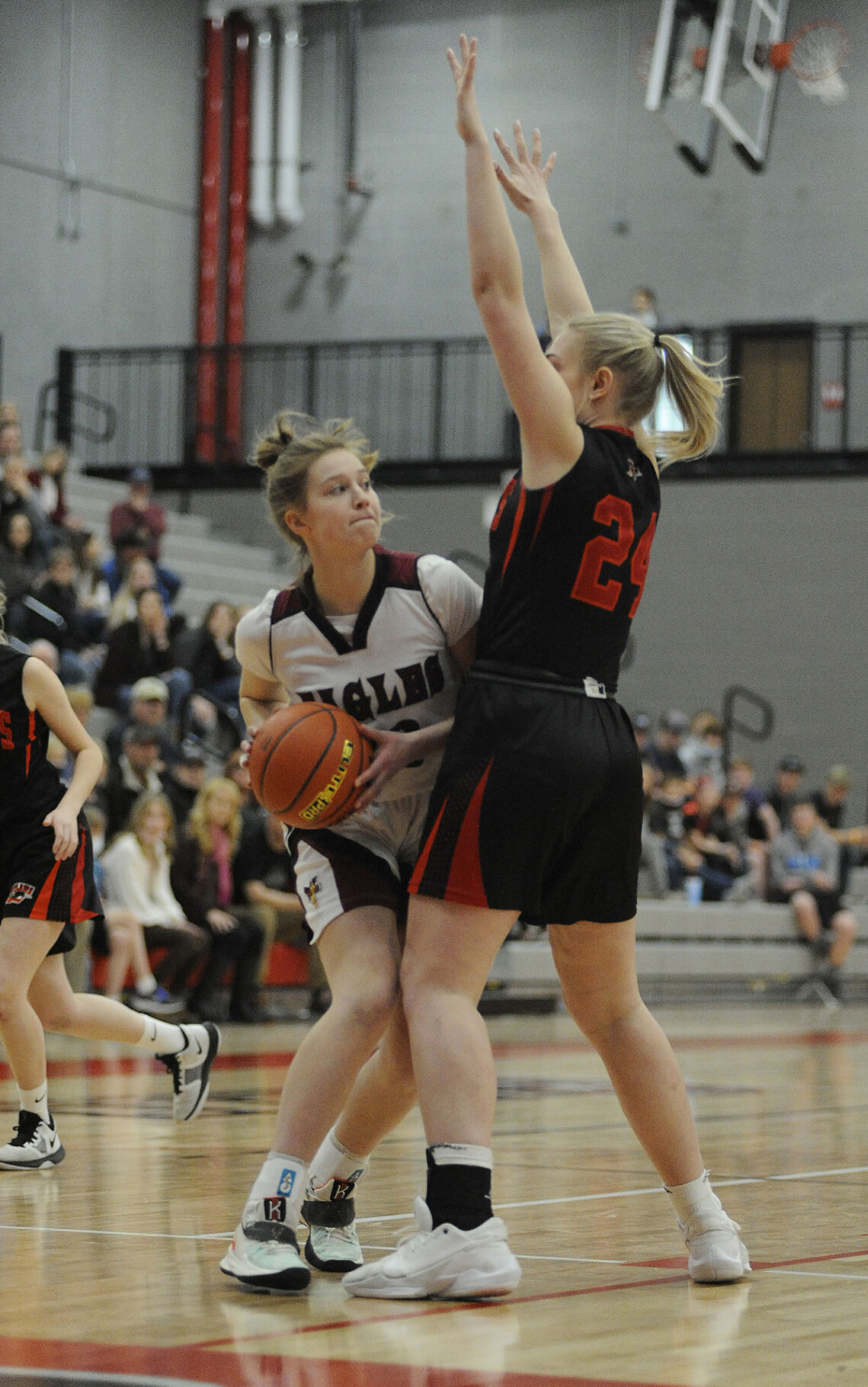 Manhattan Christian’s Eliana Kuperus, left, tries to get off a shot as Roy-Winifred’s Madeline Heggem defends Saturday in the consolation game of the state Class C tournament in Billings.

BILLINGS — A little over a minute into the contest Taylor DeVries buried a 3-pointer to open the scoring Saturday at Lockwood High School. It was the only lead Manhattan Christian would enjoy.

Roy-Winifred scored the next 12 points and led by 16 at halftime en route to defeating the Eagles 54-30 in the consolation game of the state Class C tournament. Madeline Heggem led charge for the Outlaws, scoring a game-high 22 points and grabbing 11 boards.

“We had a few little wrinkles that we wanted to throw at them and we tried a few things, but they just didn’t work,” Eagles head coach Jeff Bellach said. “They countered it.”

Christian (23-3) trailed 14-5 after the first quarter and by as many as 20 in the third. The Eagles shot just 12 of 41 from the field (29 percent) and committed 24 turnovers after tallying 33 in Friday’s victory against Seeley-Swan.

“We really struggled to take care of the ball again,” said Bellach. “We did it really all weekend.”

Eliana Kuperus was the lone Eagle to reach double figures with 10 points and 11 rebounds, while Kiersten Van Kirk and Ava Bellach combined for 13 points.

While a disappointing finish to the season, coach Bellach noted the progress Christian has made over the past three years. After going 12-12 in his first season at the helm, the Eagles have now posted back-to-back 22-plus win seasons and a pair of state tournament appearances.

“Three losses against some pretty good teams. We got some stuff to be proud of,” coach Bellach said. “For the younger girls some things to be hungry for.”

Last year’s tournament appearance, the first in a decade for Christian, proved to be an eye-opening experience. The Eagles did not win a game in Missoula, but finished 2-2 over the weekend.

“Last year we left state talking about now we know what the next level’s like and I think we got to that next level,” coach Bellach said. “But now there’s another level that we got to get to. Hopefully they can take that with them into the offseason, into their training, and make another run next year.”

Christian is set up for future success as just three players graduate. Anna Keith came off the bench for the Eagles this season, while DeVries and Kuperus have been four-year starters.

“She (Keith) was a great teammate all the way through,” said coach Bellach. “Obviously Eli and Taylor put their stamp on the program the last three years, so we’re going to miss them.”

The 6-foot-3 Van Kirk, who nearly averaged a double-double this season, is among three returning starters, and the team will return a veteran squad.

Coach Bellach also commended his team for overcoming the constant challenges while navigating a season during a worldwide pandemic.

“Can’t be disappointed with what the girls got out of this year, especially with all the other stuff going on too. To be able to play 26 games and win 23, that’s a huge accomplishment,” he said. “Our goal all season was faith over fear and kind of attacking every opportunity with that in mind. They did a great job of that to start in volleyball and they did a great job of it in basketball too.”