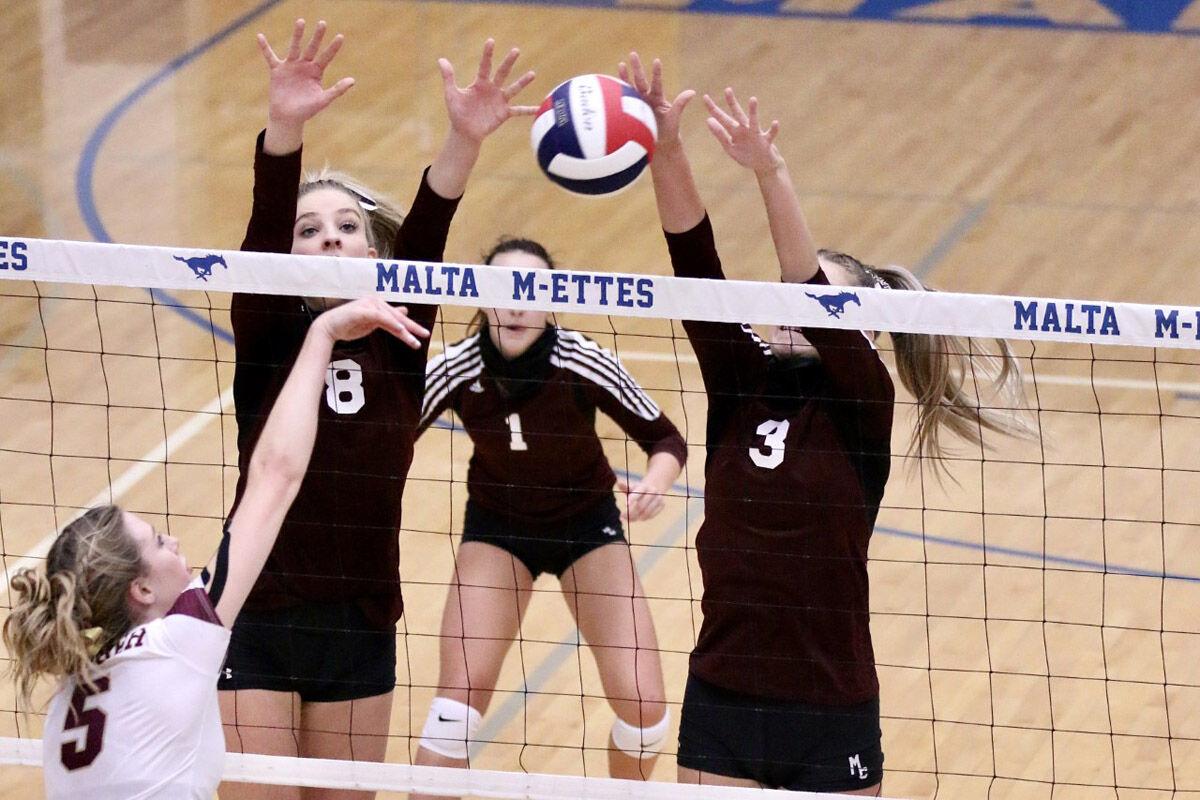 Manhattan Christian's Kiersten (8) and Katelyn Van Kirk (3) team up for a block on Bridger's Hope Buessing Saturday in Malta. 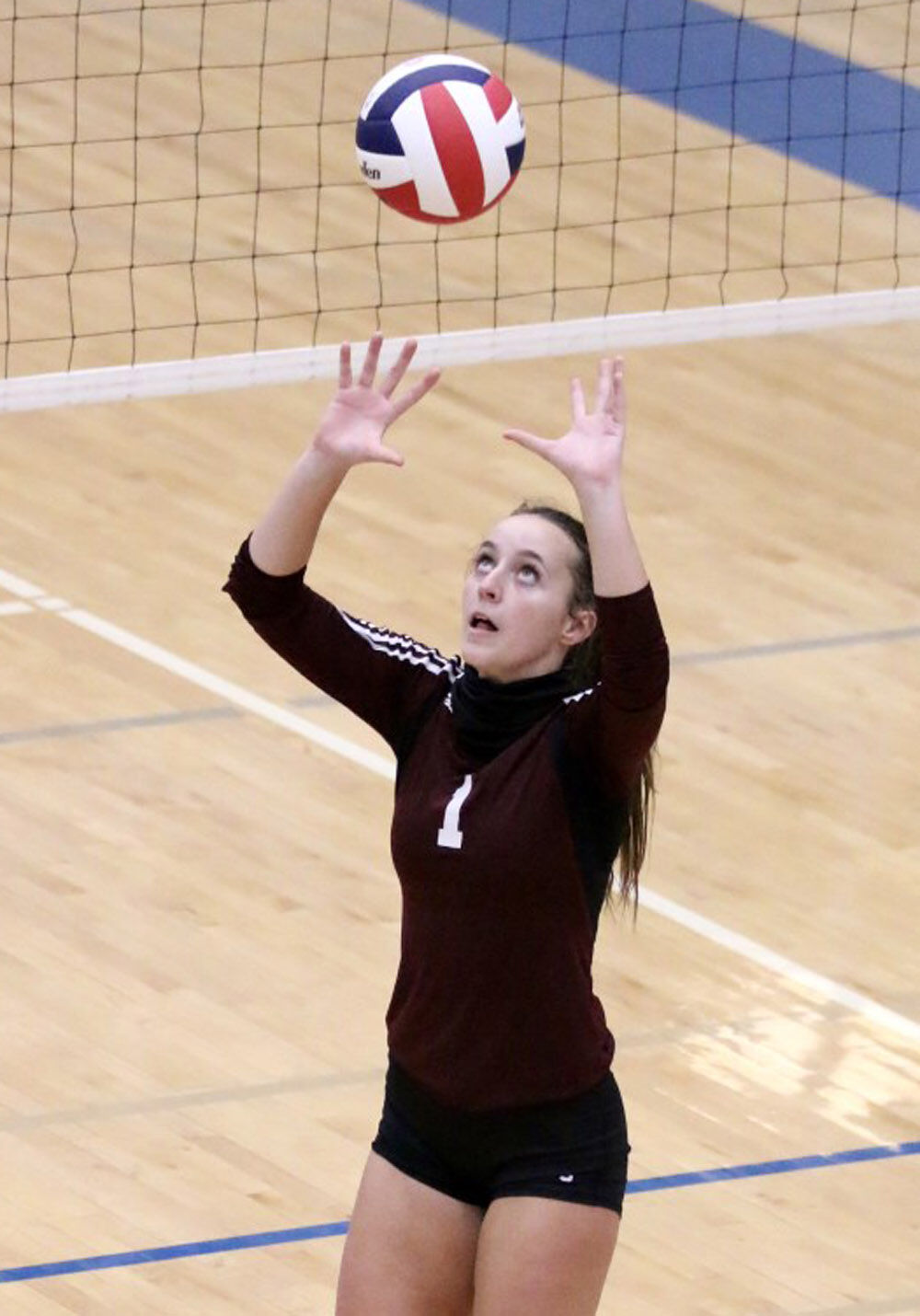 Manhattan Christian's Taylor DeVries sets the ball during Saturday's championship match against Bridger at the State C tournament in Malta. 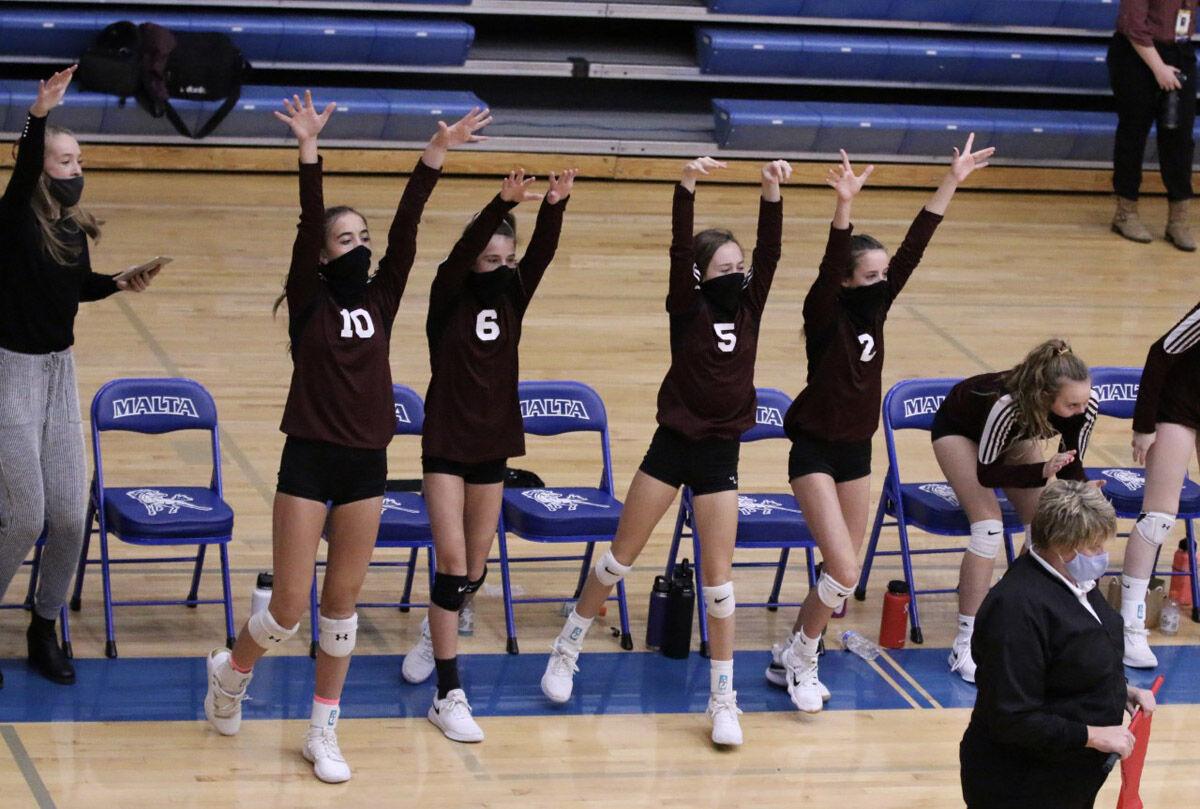 Manhattan Christian's bench celebrates a point during Saturday's championship match against Bridger at the State C tournament in Malta.

As she looked at her players during a time out Saturday afternoon, Hannah Van Dyk could see it in their faces.

Manhattan Christian was competing in its third match of the day as well as its 11th set. While the team was making a late run, there wasn’t much gas left in the tank.

After losing in the undefeated semifinal to Bridger Friday night at the State C tournament, the Eagles swept Plentywood 25-18, 25-18, 25-12 to earn a rematch against the Scouts in the championship match.

Emily Adkins, who finished with a match-high 22 kills in the first championship, tallied 26 kills, 22 digs and four blocks for Bridger.

While the Scouts won their first title since 2004 and finally celebrated after losing in the championship match in each of the past two years, the Eagles were left to ponder what might have been.

“Bridger is such a good team, they play together so well that if you just take even one mental break it’s pretty much giving a point away. I think mentally, more so, you could see that mental exhaustion,” said Van Dyk. “It would have been nice to have had some tournaments where we could play all day and get used that just to get that energy and intensity for every set. But everyone in the state’s in the same boat.”

Still, the Eagles displayed grit beginning with the victory against Plentywood. Kiersten Van Kirk tallied 13 kills and six digs in the contest, while younger sister Katelyn embraced a new role.

“We actually tried something new on offense. We move Katelyn Van Kirk to the middle just to help with that block and she did such a good job,” said Van Dyk. “As a freshman getting switched to a different position is not easy, but she really took onto it quite well.”

Katelyn Van Kirk finished with six kills, eight digs and assisted on a pair of blocks. The 6-foot-1 outside hitter then tallied a team-high 19 kills in the first championship match.

“I think we had great energy going into it. We were riding some momentum,” said Van Dyk. “They showed a lot of mental toughness. My hitters hit the ball well and we kept errors down, which was really big.”

While Kiersten Van Kirk added another 16 kills in the second championship, the Eagles were unable to overcome 14 attack errors, 15 blocking errors and weary legs.

“We made more errors than we should against a team like Bridger,” said Van Dyk. “First set we blocked a lot better. We got tired in that second one and we had too many sloppy touches on the block.”

Visser, a senior libero, again led the defense with 21 digs, while Katelyn Van Kirk had 14. DeVries contributed 17 digs and 29 assists.

While there were plenty of tears following the loss, Van Dyk noted she was proud of how her team handled the loss, especially given the high expectations coming into the season.

“You prepare for this for months and then to be so close and not be able to finish is hard,” she said. “Overall they’re supportive (of each other) and they’re encouraging, and they’re excited for next year.”