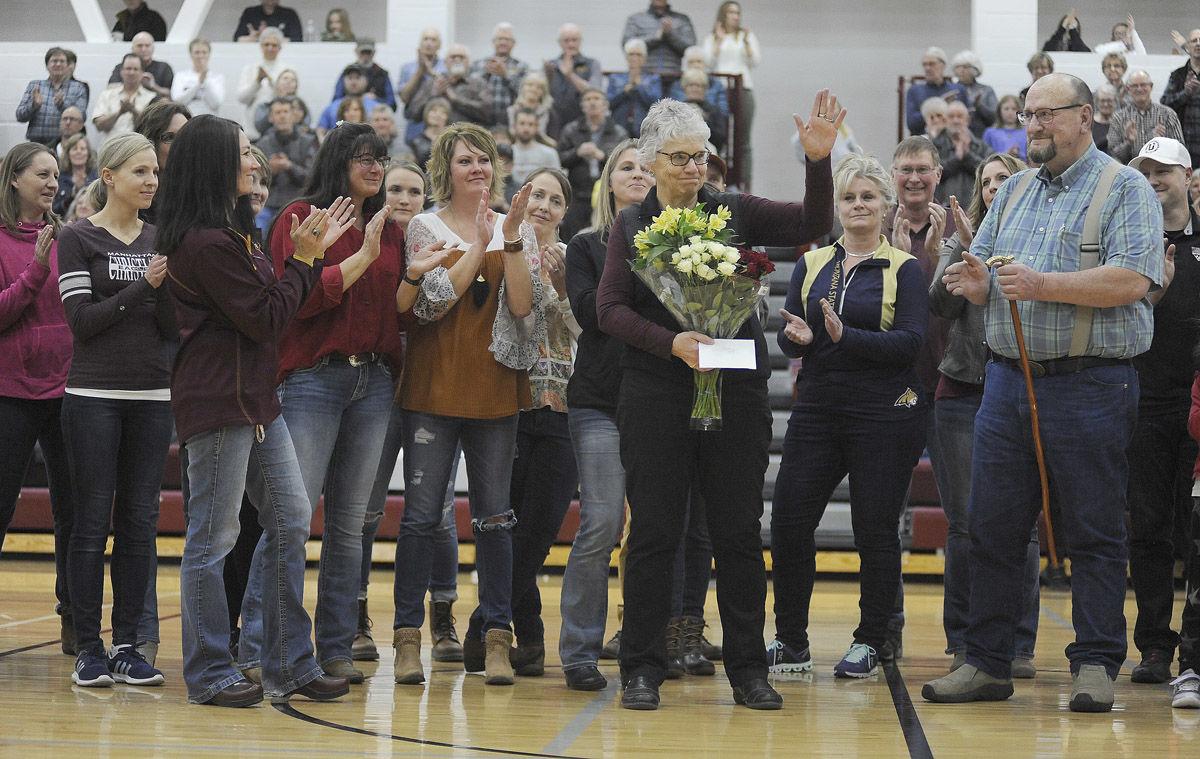 Joined on the court by former players, Manhattan Christian Athletic Director Liz Flikkema (holding flowers) was honored at halftime of a basketball game in February.

Liz Flikkema is retiring after 38 years of service to Manhattan Christian as a coach and athletic director.

While sitting in a chair behind her desk, and looking around the office, it begins to set in for Liz Flikkema.

The numerous mementos hanging on the walls and placed on her desk pull on the emotional heartstrings. In the coming weeks they’ll be packed into boxes as Flikkema says goodbye to the home she’s known for nearly four decades.

The longtime athletic director, and highly accomplished coach, is retiring after 38 years at Manhattan Christian.

While Flikkema’s contract runs through August, it already feels like the end due to the COVID-19 pandemic. The school is empty as students finish out the year with online instruction, and Flikkema’ successor, Jeff Bellach, has already begun to take over the reins as athletic director.

Bellach, a physical education teacher, has spent the past two years coaching both basketball teams at Manhattan Christian and is very adept at multitasking.

“He handles it very well and his family totally backs him up in all that stuff. I think he’s going to do very well,” said Flikkema. “He’s very organized.”

During her career, Flikkema was also excellent at balancing a full plate. She coached both basketball and volleyball in the late 80’s after becoming athletic director, while also serving as the school’s librarian.

Flikkema began her career at Manhattan Christian in the fall of 1981 after being hired as coach of the girls basketball team as well as school librarian. She also taught language arts.

Flikkema has been Manhattan Christian’s librarian ever since and has adapted with the advances in technology. Along the way she became the school’s technology coordinator.

But most around the state of Montana know Flikkema for her coaching prowess. In her first season as basketball coach the Eagles posted a 21-5 record en route to winning the second state championship in program history, and then the 1989 team boasted a 25-1 mark to claim the third.

Flikkema’s teams enjoyed winning season’s 20 times, including 20-plus win seasons seven times. According to the Montana High School Association record book, she is just one of five girls’ coaches to reach the 400-victory plateau.

“We had some highs and then we had some interesting years,” noted Flikkema.

Two of those “interesting years” came in the late ‘90s. The 1998 team did not win a contest — something Flikkema is reminded of daily.

“I have a mug on my desk and it says ‘Thanks coach for the perfect season’. We were 0-20 that year,” she said with a chuckle. “It was one of funnest years that I think I ever had. The kids were so fun. They cried only when we came close because most of the time we sort of just got blown out.”

The following year the Eagles won their season opener, but that early optimism was quickly dashed. They didn’t win again until an upset at the district tournament and finished 2-19.

“It was interesting, but it was fun,” Flikkema said of those two years.

In 1983 Flikkema became athletic director at and a year later volleyball became a sanctioned sport in the state of Montana. Four years after that Flikkema coached the first-ever program at the school.

It was still a relatively new sport — Manhattan Christian began as a JV program — and gym space was a challenge with boys basketball before the Memorial Event Center was built in the mid-2000’s.

“I checked with the coach, I said, ‘Any chance you could share the gym at some point.’ And he kind of looked at me with a grin and he said, ‘Yeah, you can half the top half,’” Flikkema said, recalling a conversation with the boys coach at the time. “And I said, ‘Really, the top half.’ He was going to have the floor and we could have the ceiling. And then he laughed and laughed.”

Back then, girls basketball was contested in the fall and volleyball in the winter, which allowed Flikkema the flexibility to coach two sports and fulfill athletic director duties. But the program was not allowed to join the varsity ranks until the following year, so the Eagles essentially played an intramural season.

The state Class C tournament was held in Bozeman that year and Manhattan Christian’s players were asked volunteer as ball girls. Flikkema, who is also volleyball official, worked the tournament and received immediate feedback from her players.

“We got some of our kids over there and after watching one match some of the girls came to me and they said, ‘You know what? Our JV team could have been playing in this tournament,’” she said. “And the next two years that’s exactly what they did. We had a varsity team and we got second at state against Bridger two years in a row.”

The Eagles went 22-10 in 1989 and then finished 26-10 in 1990 — capping both seasons in the state championship match. With her plate overflowing, however, Flikkema stepped away after three seasons at the helm.

Flikkema went on to enjoy plenty of success as the girls’ basketball coach, which only made it fitting that she was honored on a basketball court. In mid-February Bellach organized a halftime presentation for Flikkema during a game against Gardiner.

It was a well kept secret that caught Flikkema off guard, and former players and coaches joined her at center court.

“They were all kind of in on it and totally happy that I was surprised, that I didn’t know anything about it. It was pretty humbling to see all those former players standing behind me and all those coaches that showed up, too, that had coached in the last number of years. It was good,” she said. “I wanted to cry through a lot of it. But I thought, ‘That’s probably not going to be the best thing that you want to do.’ I kind of thought I was going to get through that last game and no one was even going to remember or think about it and he made sure that I had to get back out on the floor ... it was pretty incredible.”

Regardless of what happened this year, Flikkema said, it was time to retire.

“It (being athletic director) just took hours and hours, and when spring comes the thought of having to stand outside in the winter storm at a track meet used to be kind of fun,” said Flikkema. “But when it happens all the time, it’s like, ‘Okay, I really don’t want to do this anymore.’ It’s just something that you say, ‘Okay I’m over it.’”

While retired as athletic director, Flikkema plans to continue officiating volleyball as long as, “I can continue to climb that step to get up there.”