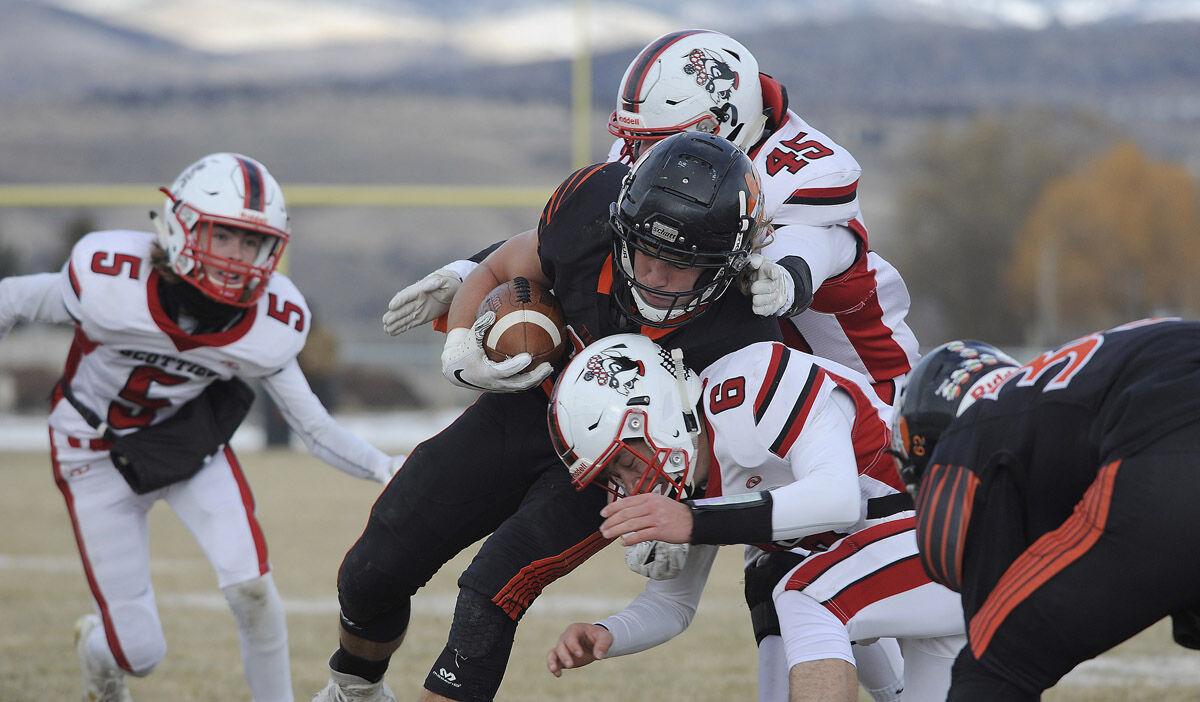 Manhattan's Gabriel Delgatty is tackled inside the 5-yard line by Glasgow's Loden Idler (6) and Tel Aune (45) after making a first half reception Saturday. 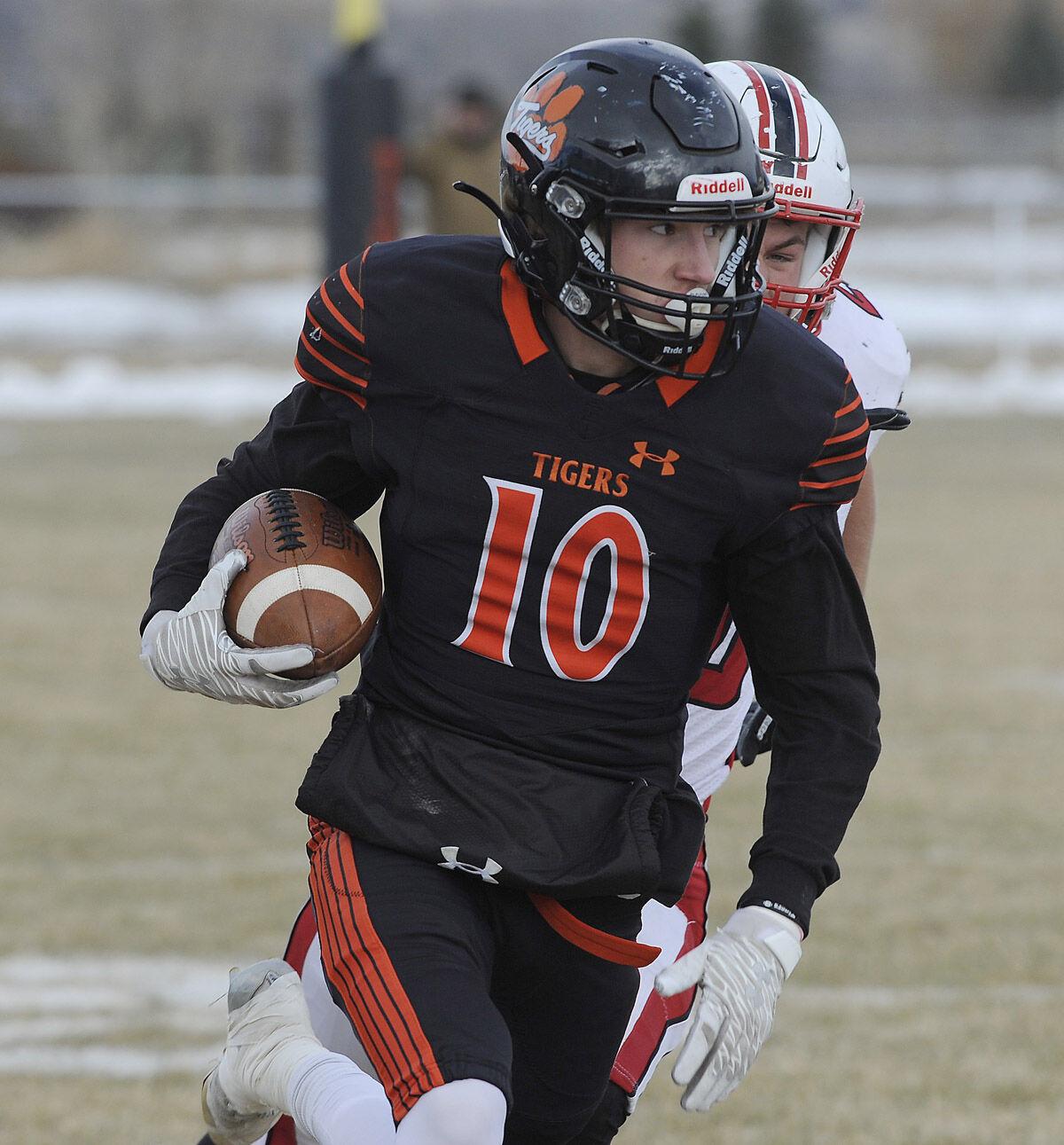 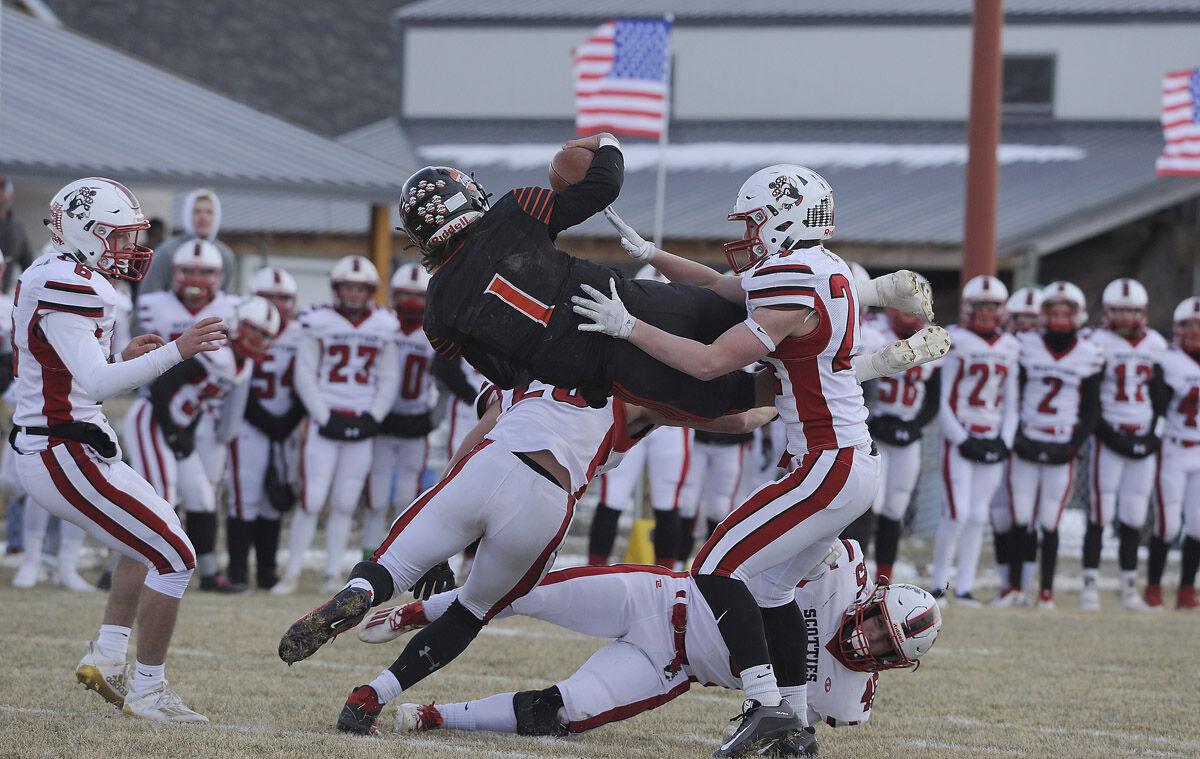 Manhattan quarterback Caden Holgate (1) leaps into the end zone en route to scoring a first half touchdown Saturday against Glasgow. 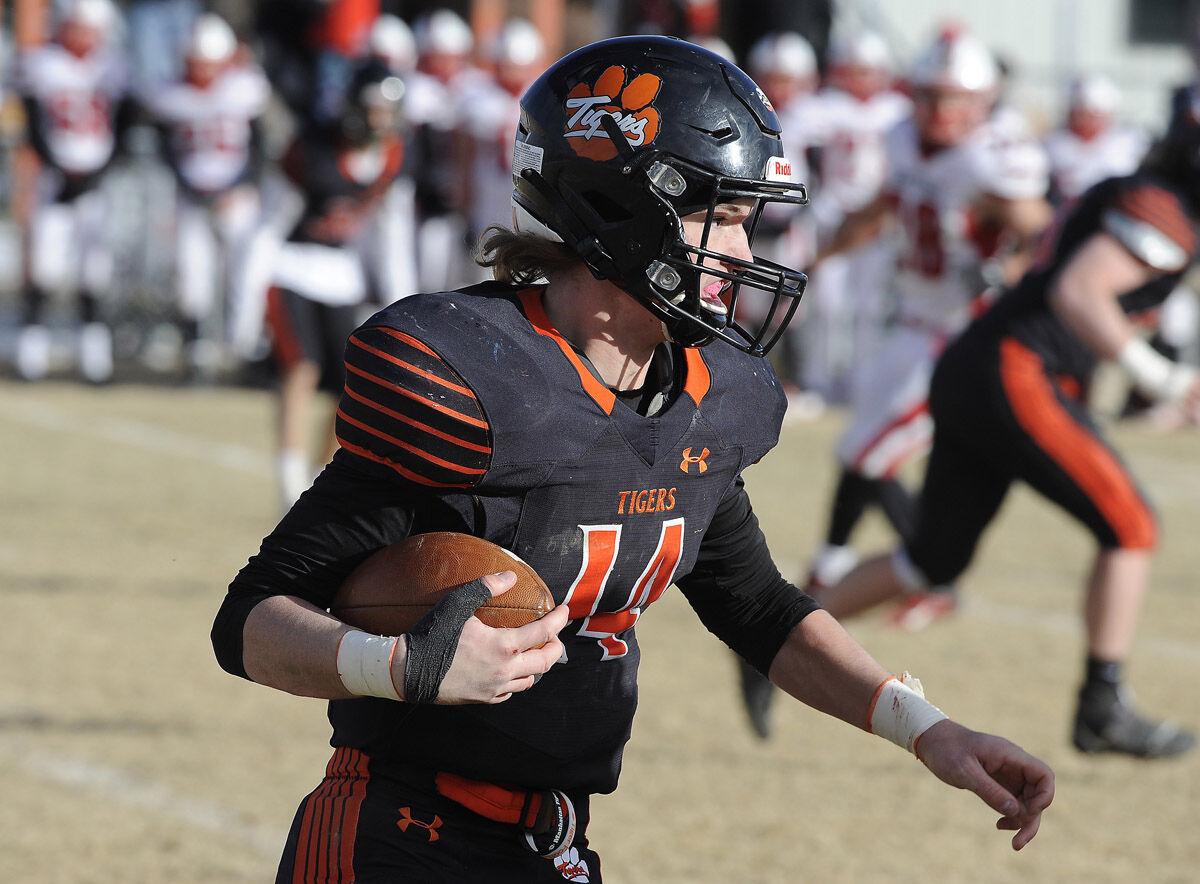 MANHATTAN — Caden Holgate had a hand in five touchdowns Saturday afternoon to lead Manhattan back to the state championship game.

Holgate, a 6-foot-1 senior quarterback, threw three touchdown passes and ran for two in a 43-18 State B semifinal victory against Glasgow.

The Tigers (11-0) advance to the title game for a second consecutive season and will play at Fairfield next Saturday. The Eagles (8-1) defeated Florence-Carlton, 8-6 in overtime, in the other semifinal.

“It’s great to be back in this position to have an opportunity to win the chipper this time. That’s what our goal is,” Manhattan head coach Chris Grabowska said. “We’re going to have a great week of preparation with our eyes on the prize and know we just can’t take any plays or days off this week. It’s great, we’re thankful for the opportunity and we’re going to go our best to bring it back to Manhattan.”

While the Tigers will not host for the first time in the playoffs, Grabowska said his team is ready to hit the road. And, they’ll return to the site of their last postseason road victory, a 25-19 semifinal victory at Fairfield a year ago.

“We’ve had playoff games on the road before,” he said. “We’re just going to treat it like any other game, like we’re playing at home. It starts with preparation and going on the road and having mental toughness and just being able to execute our game plan.”

The Tigers relied on the same formula that has been so successful all season — control the trenches, play shut down defense, and let Holgate create with his arm and legs.

But Manhattan displayed its other wealth of talent with receivers Tate Bowler and Corban Johnson hauling in touchdown passes of 70 and 73 yards, respectively, and big runs on the ground by Michael Swan and Isaac Richardson.

Grabowska noted none of that would have been possible without the play off the offensive line.

“I love the fight and the mental toughness of our O-line. They were able to get some push and open up holes and give Caden some time. Huge shout out to them,” he said. “They stepped up to the plate and got the job done.”

Manhattan scored on its second offensive play when Bowler caught a swing pass, got a block, and raced 70 yards for the score. The senior then caught the two-point pass for an 8-0 lead.

The Tigers’ second drive covered 70 yards in 12 plays capped by a 4-yard run from Toby Veltkamp. After Holgate ran in the two-point conversion for a 16-0 lead, it appeared a rout might be in the making.

But Glasgow (9-3) got a more than 50-yard kick return from Colten Fast to set up the offense at Manhattan’s 16. Two plays later, quarterback Loden Idler scored on a keeper from the 16 to get the Scotties on the scoreboard, 16-6.

That’s as close as it would get, however, as Manhattan stretched its lead to 29-6 in the second quarter on a 5-yard run by Holgate and then the long touchdown reception by Johnson.

Glasgow did cut into the deficit with less than 30 seconds remaining in the half on a 5-yard run by Idler. But, again, the two-point conversion failed, and it was 29-12 at the break.

The Tigers essentially put the game away on their first possession of the second half with a nearly six minute, 12-play drive. Holgate capped it with a 1-yard sneak, and set it up with a 29-yard run through the interior of the defense, and he carried a couple of defenders along the way.

“That kid’s a play maker,” said Bowler. “He turns something out of nothing, and it’s amazing the things he does.”

While the Scotties answered with a 26-yard TD pass from Idler to Fast to make it 36-18 late in the third quarter, Manhattan’s defense slammed the door from there and forced a fourth quarter fumble recovery.

While Glasgow broke the Tigers’ shutout streak — they had not allowed a score in two previous playoff victories — Grabowska noted the defense bent, but didn’t break.

“The defense I thought played solid,” he said. “They had a big O-line, they were able to get some plays, but I was just proud of our defense.”

Added Stenberg: “We still kept them under 20 points. We outscored them, we outplayed them.”

Holgate capped the scoring with less than two minutes remaining when he found a wide-open Gabriel Delgatty in the back of the end zone for a 2-yard score. Then the reality of advancing to another championship game began to set in.

For Bowler, it will be his first experience reaching the finale after transferring from Belgrade.

“It’s so unbelievable. It’s awesome,” he said. “These guys took me in as one and now we’re all family. It’s awesome.”