Belgrade quarterback Austin Spangler gets off a pass while being pressured by Gallatin’s Tyler Bachich Saturday. 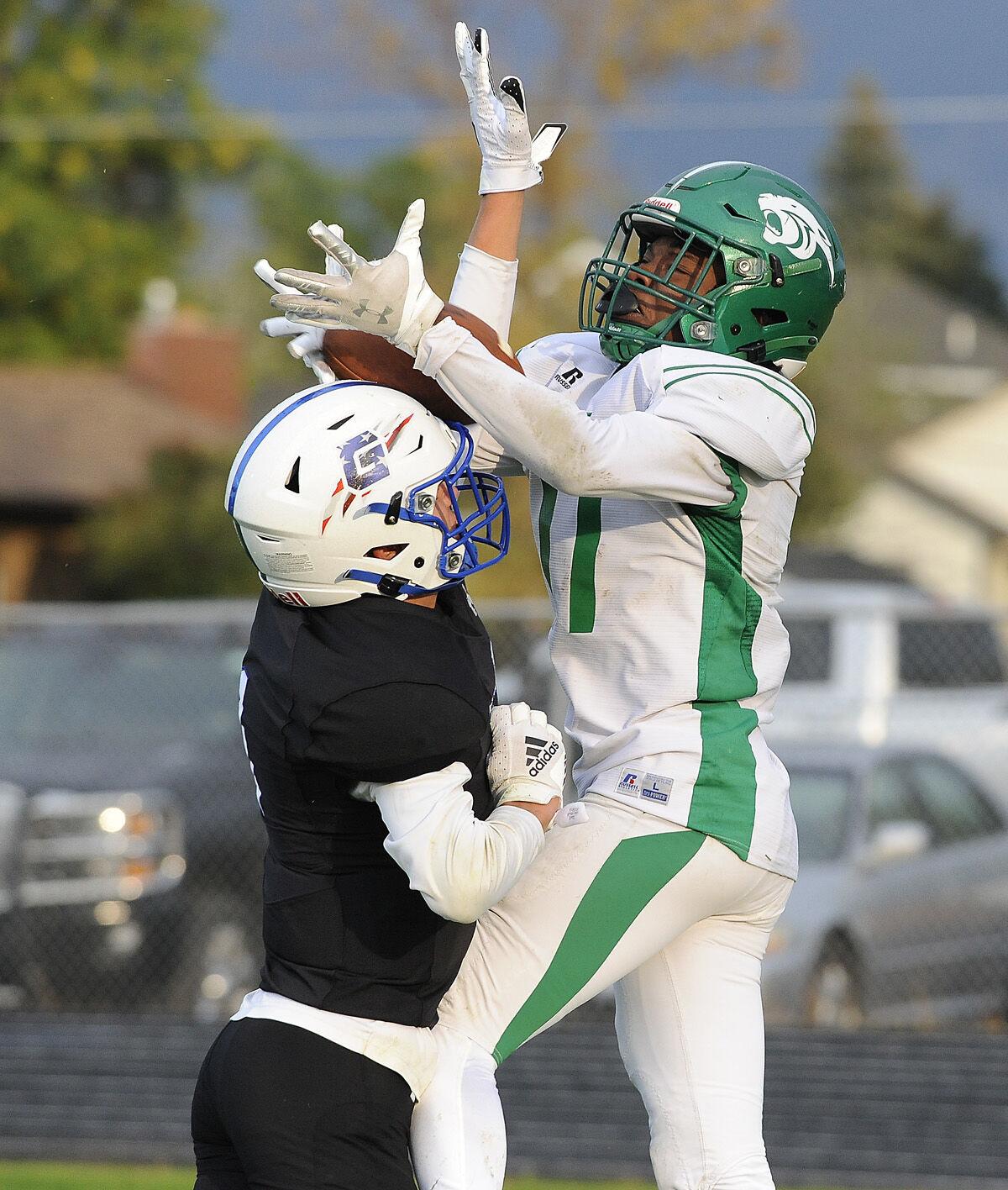 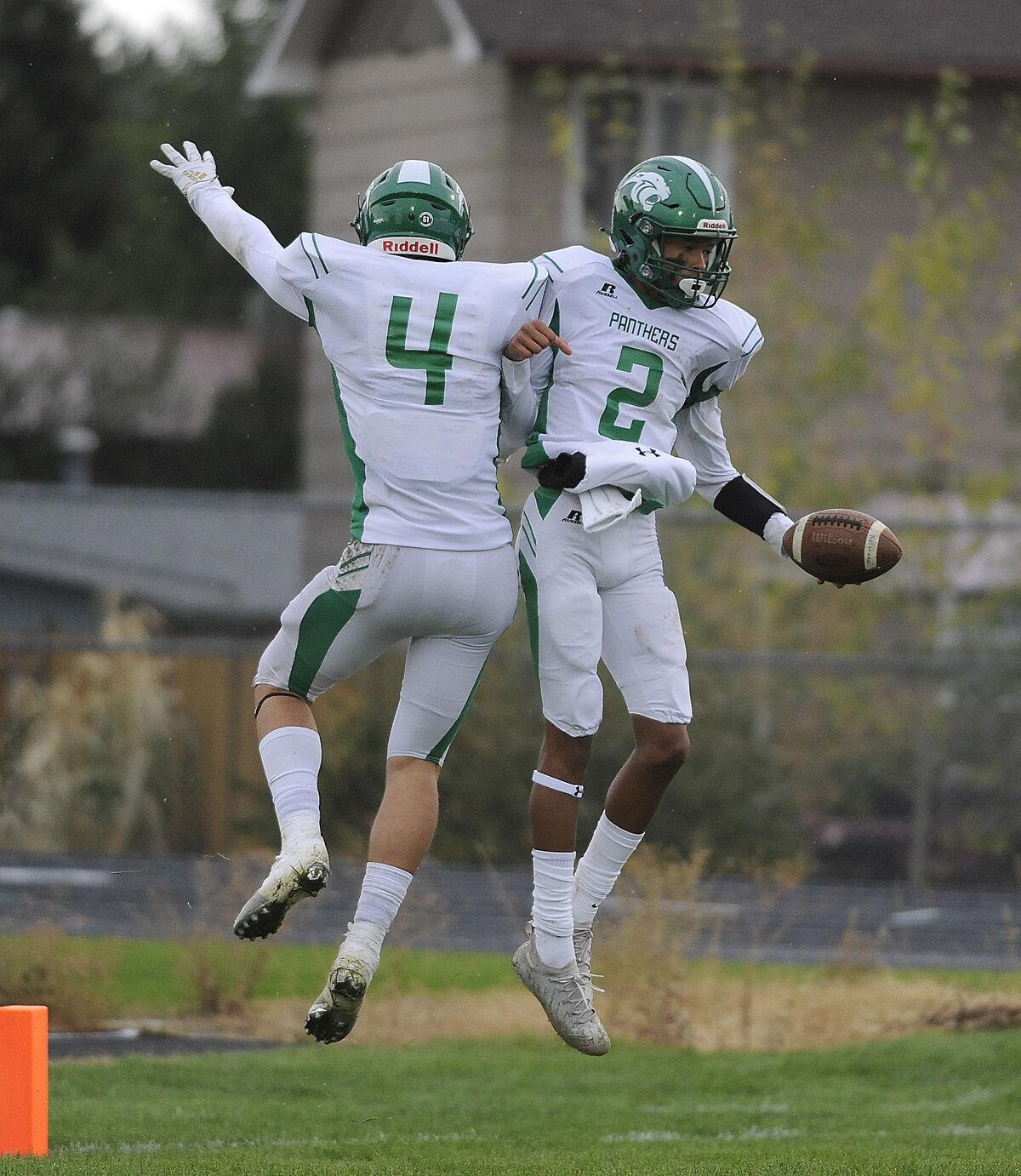 Three of those turnovers — all interceptions — came in the second half, and the Panthers were unable to overcome the miscues in a 20-19 Eastern AA loss to Gallatin High.

Gallatin (1-1) took a one-point lead into the fourth quarter and then averted disaster early in the frame when punter Braeden Mikkelson chased down the ball in the end zone following a high snap and managed to get the kick off before being tackled.

Belgrade took over at the Raptors’ 39 and quickly moved inside the 25. But a false start pushed the ball back to the 26, and then on the next play junior quarterback Austin Spangler was intercepted by Garret Coley at the 25.

By the time the Panthers got the ball back there was less than three minutes remaining, and then Spangler was sacked a short time later on fourth and 11 to effectively end the game.

Belgrade’s secondary gave up several big plays, and was completely fooled on the first play of the game. The Raptors threw a double pass and Corbin Holzer scored easily on 65-yard reception.

“They scored big, they scored right away,” said Kinnaman. “I thought the kids responded well. I don’t think the big score right away hurt as bad as people thought. Yeah, of course it’s points, but they caught us off guard and got us with a good trick play and you got to live with those. Those are part of the game when you’re playing aggressive football.”

On Belgrade’s ensuing possession, Spangler scrambled out of the pocket and lost the ball while being tackled by Tyler Bachich and Gallatin recovered. But the Panthers forced a big three and out defensively, and then caught a break on a botched punt by the Raptors.

Riding the legs of junior Gage Ruddick, Belgrade scored on its second possession. The six-play drive culminated with a 6-yard touchdown pass from Spangler to Cedric Miller Junior. But the Panthers missed the first of two PAT’s on the night, and the score remained tied at 6-6 after the Raptors also missed their conversion.

Gallatin’s Bryce Mikkelson scored the first of his two touchdowns with 8:06 left in the first half for a 13-6 lead, but Belgrade trimmed the deficit to one after Aidan Kulbeck picked off Braedon Mikkelson and returned the ball to the Raptors’ 27.

One play later, Spangler tossed a 27-yard touchdown pass to Ta’Veus Randle, who bobbled the ball crossing the goalline before securing the reception, with 1:38 left in the half. The Panthers again missed the PAT and trailed by one at halftime.

Belgrade took its first lead of the season after receiving the second half kick and marching 68 yards in seven plays. The drive culminated with Miller Junior making a leaping reception over Gallatin’s Garret Dahlke in the endzone for the touchdown.

Rather than go for two, however, Kinnaman opted to kick the PAT, which was successful for a 19-13 lead with 8:16 left in the third quarter.

“I don’t like chasing points and with the amount of time that we had left in the game, I was comfortable with where we were at,” Kinnaman said. “Maybe if were a little bit later in the game maybe I would have thought about it, but I liked where we were at. We were driving the ball, we were scoring, we were moving, and again, we had opportunities.”

Gallatin responded on its ensuing possession to tie the game on an 8-yard run by Bryce Mikkelson, and then Dahlke booted the PAT for what wound up being the game-winning point.

Belgrade’s next three possessions each ended in a turnover, including a throw by Randle that was a little high and off the hands of Tyler Gordon. Coley made a great diving play to keep the ball off the ground for the interception.

“We got to learn to play a complete game,” said Kinnaman. “Our defense was scrambling. Our offense didn’t take advantage of opportunities, and our special teams had a couple of blunders meaning missed extra points. That hurts, that’s points on the board.”

Editor's note: It was the first victory in program history for Gallatin, which opened its doors this fall.