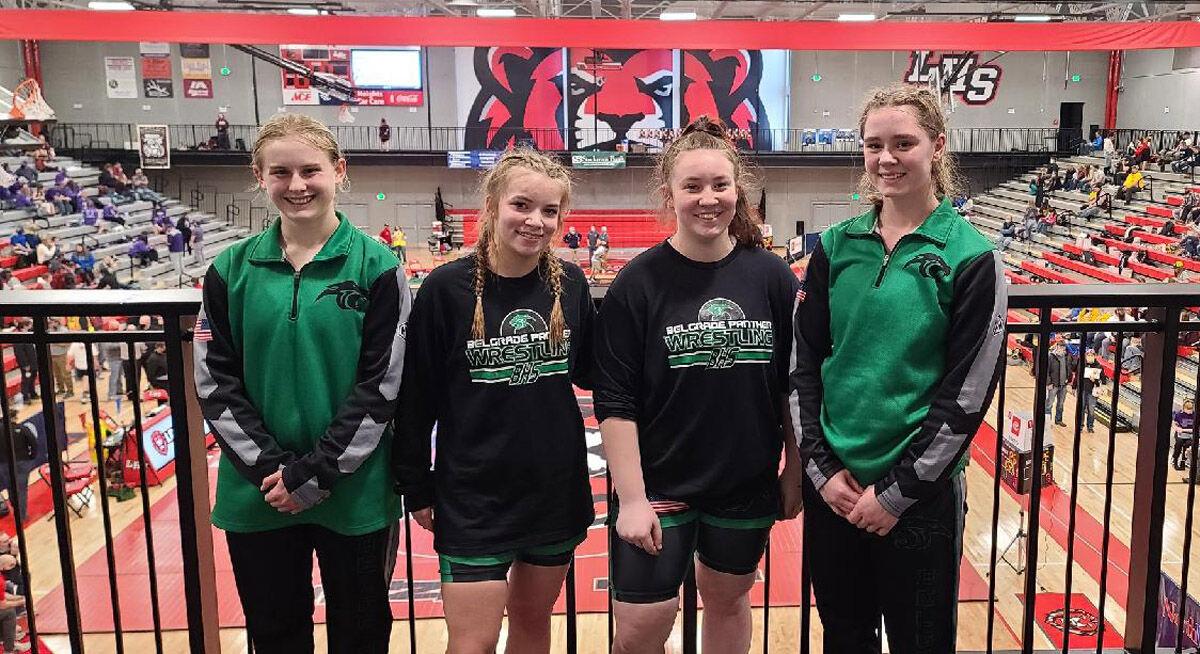 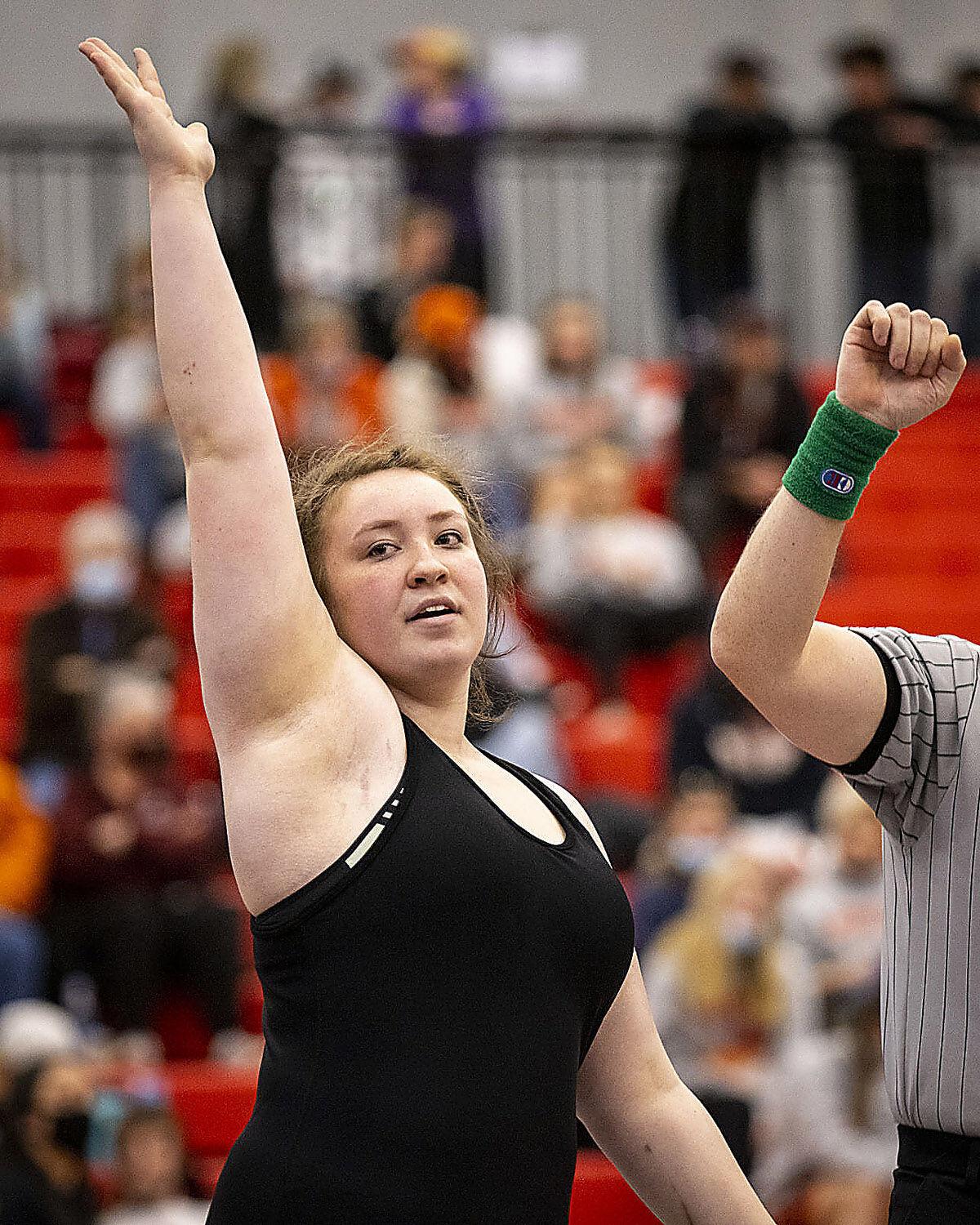 Belgrade’s Norah Larson raises her arm after winning her match against Cascade’s Skye Smith in the semifinal round of the state tournament Saturday in Billings. 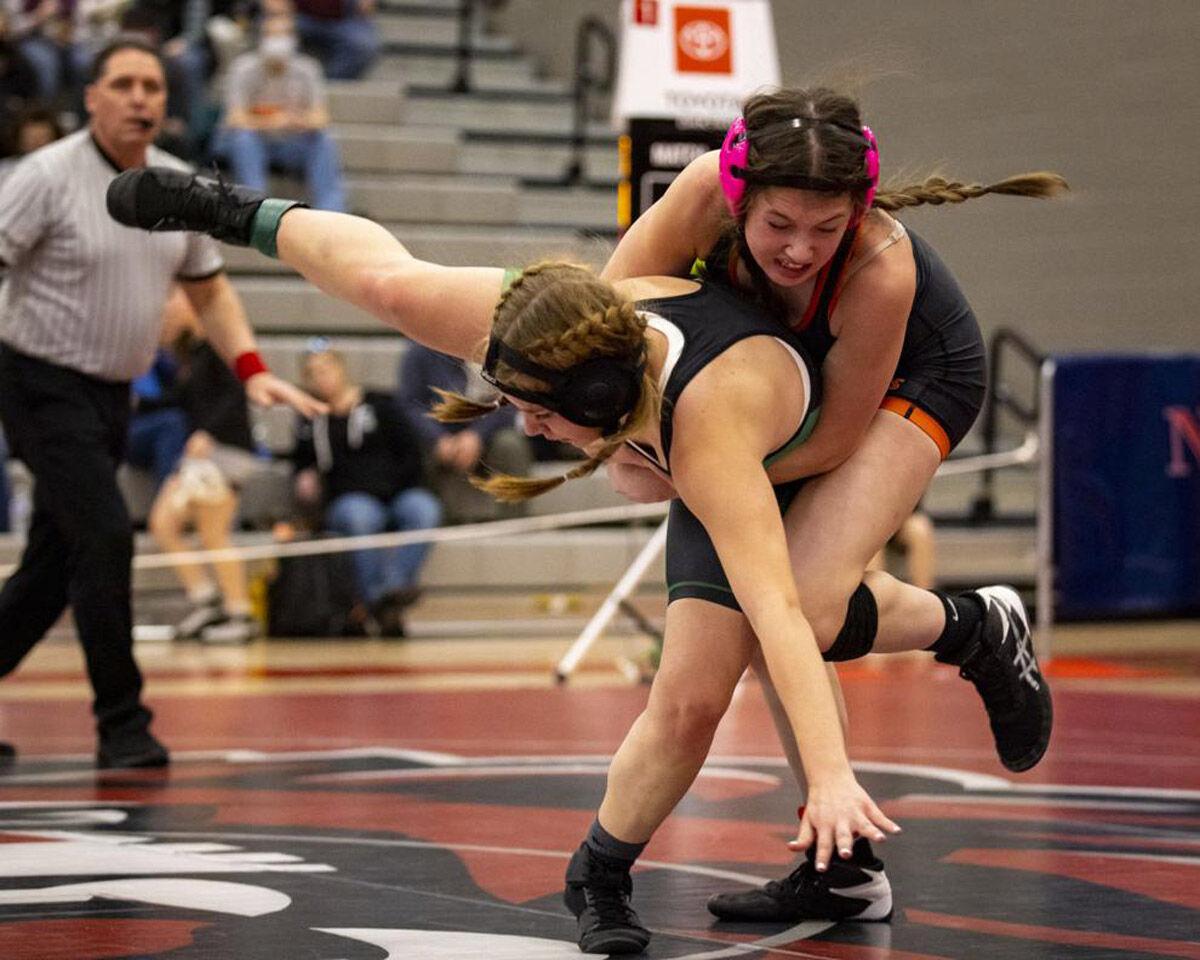 With just four wrestlers who saw limited action against other girls during the season, it could have been a tough weekend for the Panthers at Lockwood High School. But the quartet exceeded expectations.

Three of the wrestlers placed in the tournament, led by a runner up finish from Norah Larson, and Belgrade tied with Gallatin to place sixth in the team standings with 54 points.

“They all wrestled awesome. We didn’t know what to expect,” said Weatherston. “That’s the thing with double A in our division, we maybe wrestled three or four girls the whole year, whereas these other girls from all across the state were getting 14 matches with girls.”

Belgrade’s lack of competition leading into the tournament was not detrimental as all four wrestlers notched at least one victory and Chi Gushi and Maya Amundson placed fifth and sixth, respectively.

Larson led the way for the Panthers, pinning two opponents en route to reaching the finals at 205 pounds. Both victories were first round pins beginning with Cut Bank’s Haylee Fetters in 45 seconds and then Cascade’s Skye Smith in 38 seconds in the semifinals.

But Larson was pinned by Billings Skyview’s Kassidee Savaria in 32 seconds in the finals. Savaria finished unbeaten on the season at 11-0.

“Norah wrestled awesome. She was going after girls,” said Weatherston. “The first girl she beat was super tough and she just kind of took it to her. Even in the semifinals match, she just really came after these girls, took them down and pinned them pretty quick.”

Gushi won her first round match at 170 and then lost in the quarterfinals to Flathead’s Boston Howell. She battled back to win a pair of consolation matches before losing in the consolation semifinals to White Sulphur Springs’ Cabry Taylor.

That set up a rematch against Howell in the fifth place match and Gushi notched a pin in 55 seconds. She finished 4-2 at the tournament with all four wins by fall.

“She wrestled awesome. She ended up beating the girl that she lost to in the quarterfinals for fifth and sixth,” Weatherston noted. “So that was a good redemption win too.”

Amundson, the team’s lone senior, was pinned in the first round at 138. But the first-year wrestler bounced back with three consecutive victories to reach the consolation semifinals.

Amundson was pinned in the third period by Frenchtown’s Maria Miotke, and then lost by fall to Whitehall’s Kenzy Best in the fifth place match. She finished 3-3 on the weekend with all three victories via a pin.

“For someone so unfamiliar with the sport to come in and practice as hard as she did — her work ethic is pretty unmatched as far as girls go,” said Weatherston. “She’s always going 100 percent trying to get better, trying to learn. We’re definitely going to miss her.”

Belgrade’s other competitor at state was Allie Murphy, who finished 1-2 at 126. The freshman lost to Cascade’s Lily Grismer in the first round and to Havre’s Brooke Nelson in the second round of the consolation bracket.

But, between those defeats, Murphy notched her first victory of the season against Billings Senior’s Liviya Atwood in a 7-5 decision.

“She had a little bit of a tougher season. Came to state without a win under her belt and came home with a win. Even the ones that she lost she was right there,” said Weatherston. “He first match was tough, she wrestled the number one seed, which is really rough. But next match she won. Match after that she was in it the entire time. She wrestled really tough.”

“We’re super excited,” said Weatherston. “(Assistant coach) Kale (Evenson) and I are already planning what kind of summer training we need to do and things we need to do within the school to just get more girls out.

“We’re just excited to see what the future holds. And see how much better can we improve the following year.”