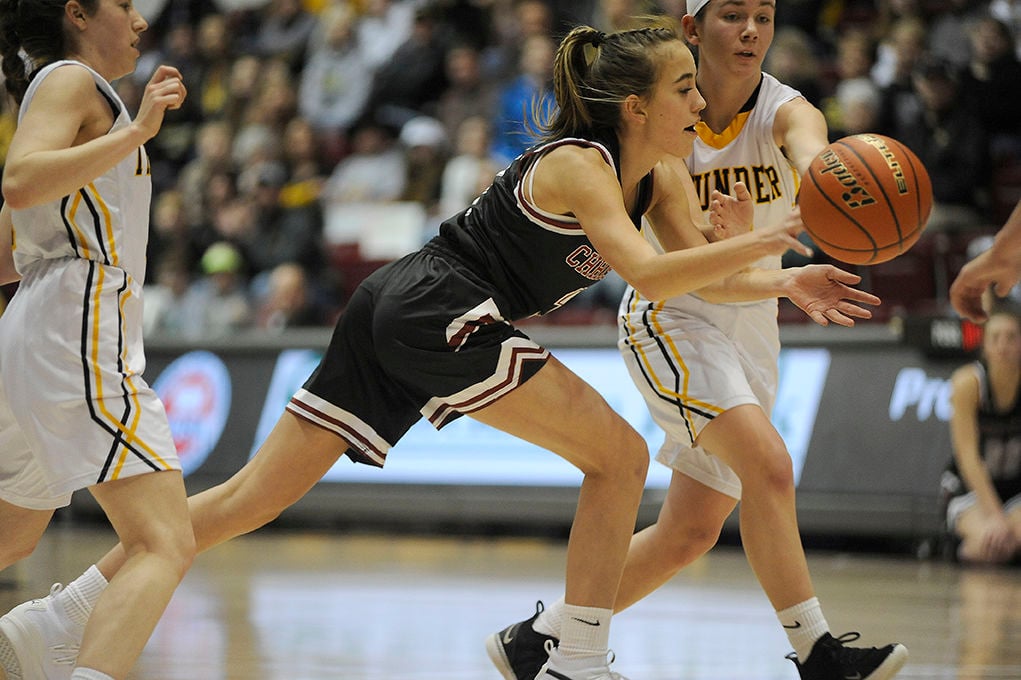 Manhattan Christian freshman Ava Bellach has the ball knocked away while dribbling Friday morning against Westby-Grenora in Dahlberg Arena. 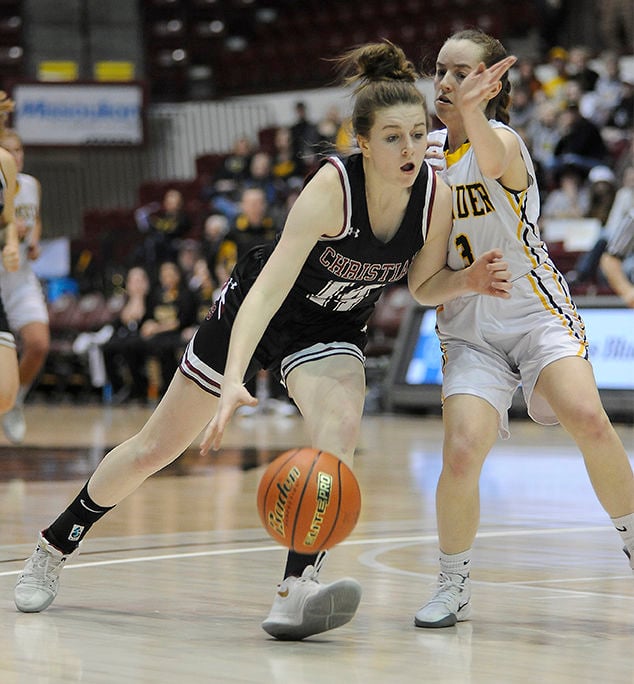 MISSOULA — Outside of the team’s locker room Friday morning in Dahlberg Arena, Jeff Bellach was already looking toward next year.

Manhattan Christian’s season came to an end in a loser-out game at the State C tournament, but they got a look at what it takes to become an elite program. Thus, Bellach is excited about the future after the team reached state for the first time in a decade.

“I think we have a great group coming back and they’ll be hungry to keep working at it. Obviously, Maddie (Luidahl) and Rylie (Thompson) being seniors is tough to end, but they did things this year that Manhattan Christian girls haven’t done in a long time on a basketball court,” he said. “Twenty-two win season, make it to state and battle through some challenge games, a lot of positives to take away even though the disappointment of it.”

Following a quarterfinal loss Roy-Winifred Thursday, the Eagles appeared to have bounced back mentally and trailed by just a point after eight minutes of play. But they eventually committed 30 turnovers and never found a way to contain Jenna Rust, who scored a game-high 26 points in leading Westby-Grenora to a 52-36 victory.

“We didn’t play our best by any means,” said Bellach. “That happens in these kind of games, loser-out games at state after some disappointment.”

Rust scored 15 of her points before halftime as neither Eliana Kuperus nor Kiersten Van Kirk where able to slow her down in the paint. The 6-foot senior shot 7 of 13 from the field and grabbed 10 rebounds in the first half alone.

While Kuperus tallied 14 of her team-high 16 points before intermission to keep the Eagles within striking distance, 28-20, she and Van Kirk were in unfamiliar territory trying to guard Rust.

“It’s just another level, like I said yesterday, that we haven’t seen. It’s good for our girls to see that,” Bellach said of the post play his team faced. “Eli and Kiersten, they can see what they need to do to get to that next level, and our guards too. Those girls are scrappy and we’ve dealt with that, and we’ve come a long way and got better. But we got to continue to improve.”

Elizabeth Field scored several times on dribble penetration for the Thunder en route to tallying 14 points, and combined with Brynn Folvag for the team’s four 3-pointers.

The Eagles (22-6) lose just Liudahl and Thompson to graduation and will return four starters.

“We had a great season. These girls put in a lot work from last year to where they are now. They’ve come a long, long ways, so I give them a lot of credit for the time they put in,” said Bellach. “To be honest, a lot of them it’s not their favorite sport, it’s their second. I encourage them to play lots of other sports and it’s part of the deal, but to get to that next level in this sport it’s going to take a little more commitment and a little more time with it and they realize it now.”