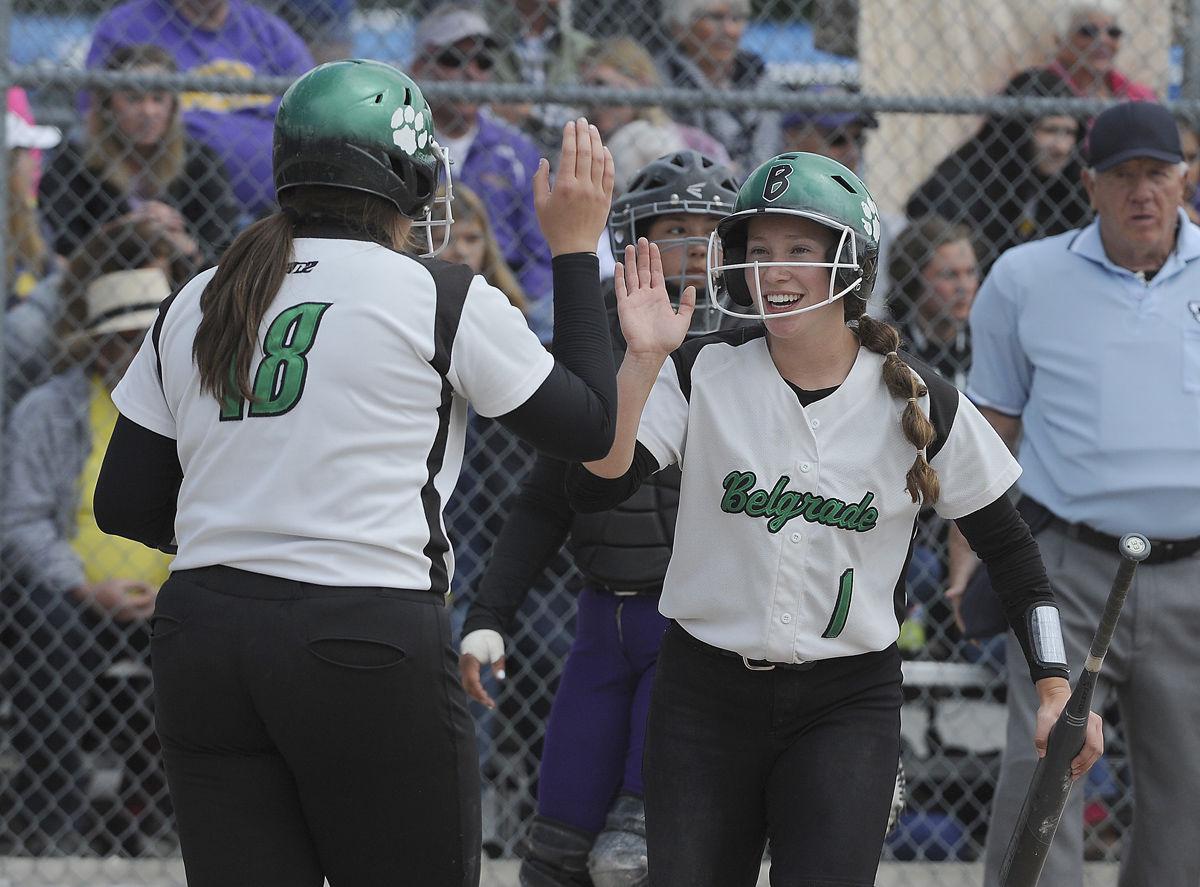 Belgrade’s Kenna Thomas, right, exchanges a high-five with Olivia Cook after scoring a run in the State A championship game against Polson in May. The duo are among five Panthers who will compete in the Veterans Memorial Softball Classic. 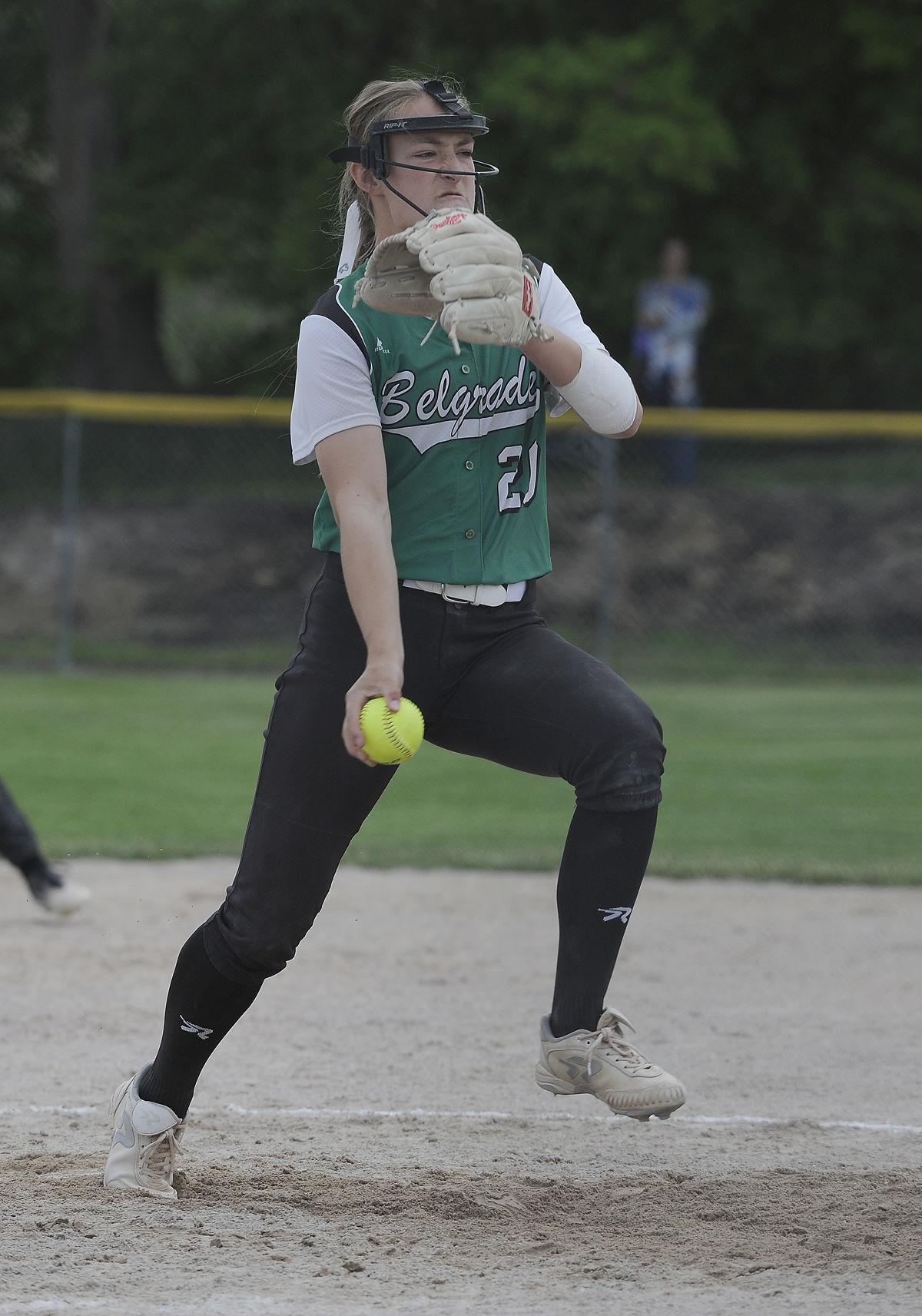 Belgrade’s Erin Elgas delivers a pitch during the State A tournament in May. 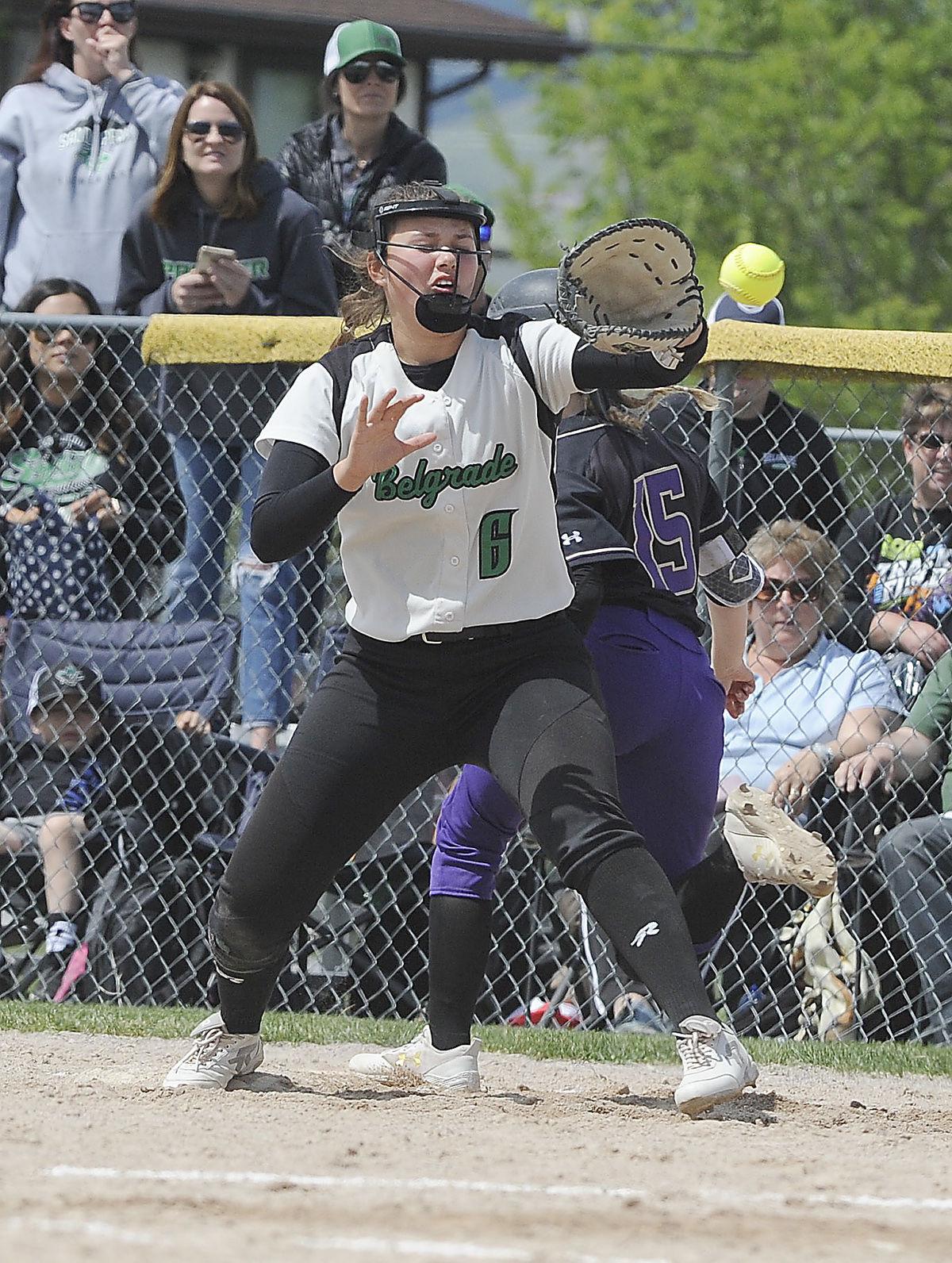 Belgrade first baseman Maddie Tomasetti fields a throw during the State A championship game against Polson in May.

The two-day event, held at the Belgrade Softball Complex, not only honors Montana veterans, but features five teams named after each branch of the military and nearly a dozen games.

Action begins Friday with the opening ceremony at 1:30 followed by games at 2:30 p.m. Saturday’s championship game is scheduled for 5:30 p.m.

“I’m always amazed at the talent that these girls have and that they bring to the tournament,” he said. “Looking at the stats when we were selecting rosters, almost half of the girls that RSVP’d had batting averages over .500. That to me just seems incredible. I don’t think we’ve ever seen anything like that before, so it just continues to amaze me the type of talent that these girls have that are willing to come out and play in this.”

Representing Belgrade will be Olivia Cook, Haylee Curry, Erin Elgas, Kenna Thomas and Maddie Tomasetti. The quintet helped the Panthers to an unbeaten season and a third consecutive Class A championship this past spring.

Cook, Curry and Elgas are graduated seniors who will be playing at the collegiate level, while Thomas and Tomasetti were sophomores in 2019.

Elgas posted a 17-0 record in the circle this past season while compiling 100 strike outs and a 1.25 ERA. She earned All-State honors along with Cook, who boasted a .464 batting average while belting nine homers and knocking in 37 runs.

Tomasetti was also an All-State selection, while Thomas earned first team all-conference honors. Curry, who was an honorable mention selection, was a late addition to the tournament after another player withdrew.

Other notable players include Huntley Project pitcher Addy Hultgren, who will compete on the Army team along with Cook and Elgas. Hultgren led the Red Devils to the B/C title in May at the Belgrade Softball Complex.

Hultgren’s teammate, Sara Sumner, will compete for the Air Force.

Thomas and Tomasetti will play for the Marines, while Curry filled the vacant hole on the Air Force.

“There was a little bit of shuffling of the rosters. We had a couple girls pull out,” said Matter Jr. “So we’ve had a couple late additions.”

Anna Toon, who won the Montana Gatorade Player of the Year award after guiding Great Falls to a second consecutive AA championship, did not accept an invitation to play.

“We didn’t hear from Anna. A little disappointing,” said Matter Jr. “But, especially these seniors, some of them have to report to school. That’s one of the difficulties that we’ve had in years past is girls that have to report to school. Sometimes it (the tournament) just runs into that school schedule and they can’t make it, so I guess that’s what I’m kind of assuming what may have happened.”

On the coaching side, Manhattan’s Randy Cygan will helm the Army. Cygan guided the Tigers, a second-year program, to the State B/C tournament this past season.

“I think Randy’s shown just in two years in his role as head coach out there at Manhattan where he’s brought that program to how they competed at the state tournament this year,” said Matter Jr. “We’re excited to have Randy out and excited to see what he can do at the classic.”

There will be four games Friday followed by a catered dinner and home run derby beginning at 7 p.m. Matter Jr. noted the derby is full and plans to use two fields in order to speed things up. The pop-to-pop and base running contests will be held Saturday morning.

Games might be available online as Matter Jr. has been looking at Panther Live to steam the contests on YouTube.