Belgrade’s Alex Casas tries to avoid the tag by Livingston’s Max Stern Tuesday. Casas was tug out on the play after trying to advance to second on an error. 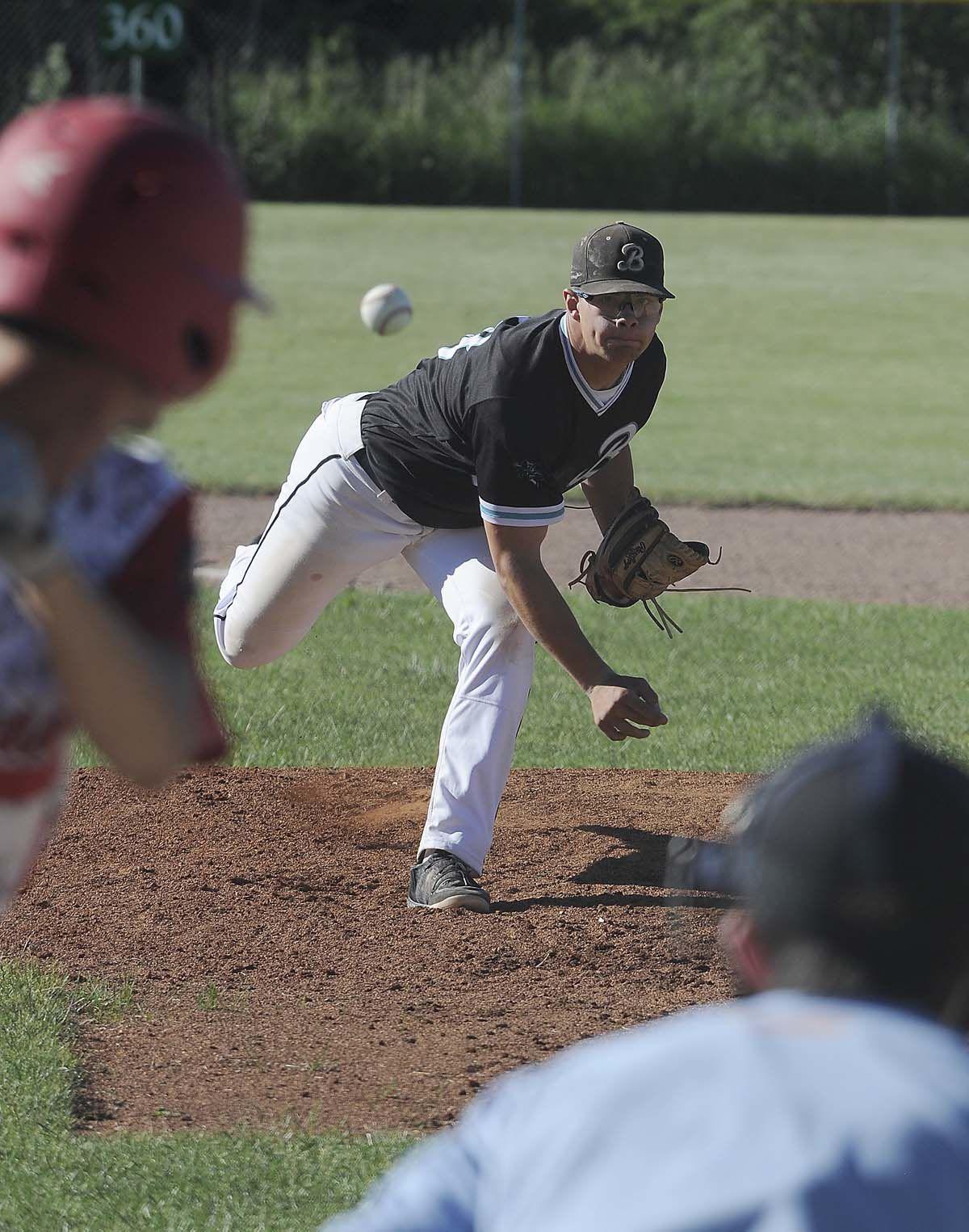 Belgrade’s Mason Jacobsen fires in a pitch during the second game of a Southern A conference doubleheader against Livingston Tuesday afternoon.

LIVINGSTON — With the toughest stretch of the schedule beginning with a doubleheader on the road, Johnny Graham was thrilled that his team needed just 10 innings to sweep a doubleheader Tuesday afternoon.

The Bandits dominated Livingston en route to 11-0 and 15-0 Southern A victories led by solid pitching performances from Cooper VanLuchene and Mason Jacobsen.

Belgrade improved to 11-1 in league play, but has yet to play Bozeman A and Gallatin Valley as the season approaches its midpoint.

“We haven’t seen everybody yet and conference is competitive,” said Graham. “It’s day by day. I know it’s cliche, but we’ll take the game in front of us and attack it as best we can.”

While the sweep was quick and efficient, it was also a bit of a relief. The Bandits are still down three players due to injuries and competed with just 11 as an extended tournament begins this weekend in Bozeman.

“I think some of the guys are getting close to returning, but they’re not returned yet,” Graham said. “We have 11 abled bodies and we’ll probably bring a couple up from the B, but the B team has a tournament this weekend as well in Three Forks. So we can’t make them go with 10. It’s tricky.”

Belgrade will play 11 games in nine days, including three doubleheaders and five games at the Heroes Park ‘AA’ Invitational in Bozeman. That grueling stretch began with the sweep of Livingston and will conclude when the Bandits host Livingston on July 1.

“From today through next Wednesday is loaded with games,” said Graham.

In Tuesday’s opener, VanLuchene tossed a 3-hitter and stuck out six in leading Belgrade to victory. The Bandits tallied just eight hits, but capitalized on eight Livingston errors as well as six walks.

In Game 2, the Bandits sent 13 batters to the plate in the first inning en route to scoring eight runs. Wyatt Russell finished 2 for 2 with an RBI, while Neill was 2 for 4 with three RBIs. Richards added a double.

“I thought we swung it well. The amount of hard contact on the line was nice to see,” said Graham. “And these guys, they work hard and I think all in all they understand the plan to take to the plate, but still you’ve got to execute it. Hitting’s difficult, that was nice to see.”

Jacobsen shined on the mound, allowing just one hit and striking out 10. He worked out of a bases loaded jam in the second inning and then stuck out Braden Duncan to end the game after the Braves had gotten runners on second and third in the fifth.

Sunday’s games and seeding will be determined after the first four days.

— Note: Seven games will be played at Medina Field in Belgrade, including two on Sunday.