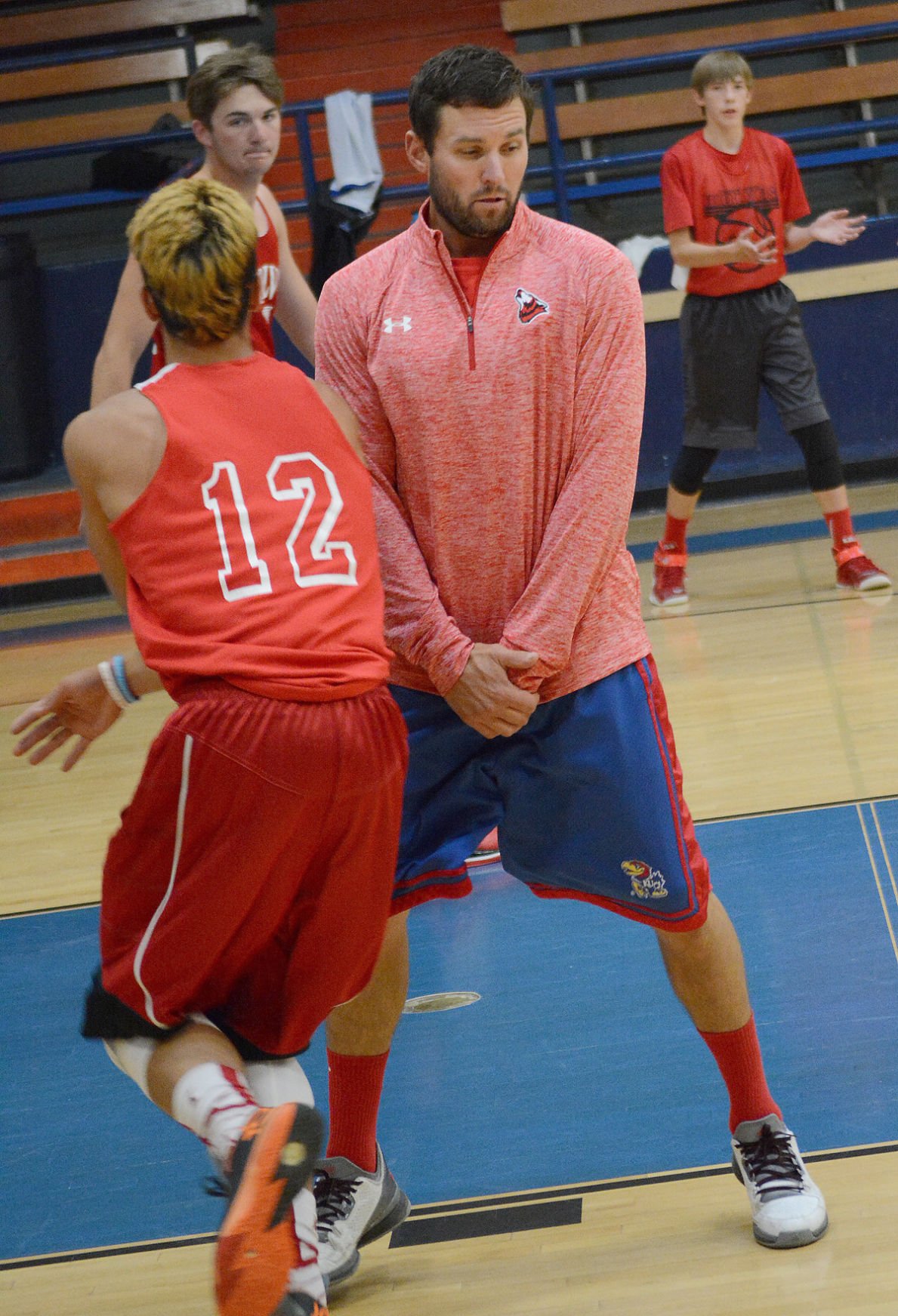 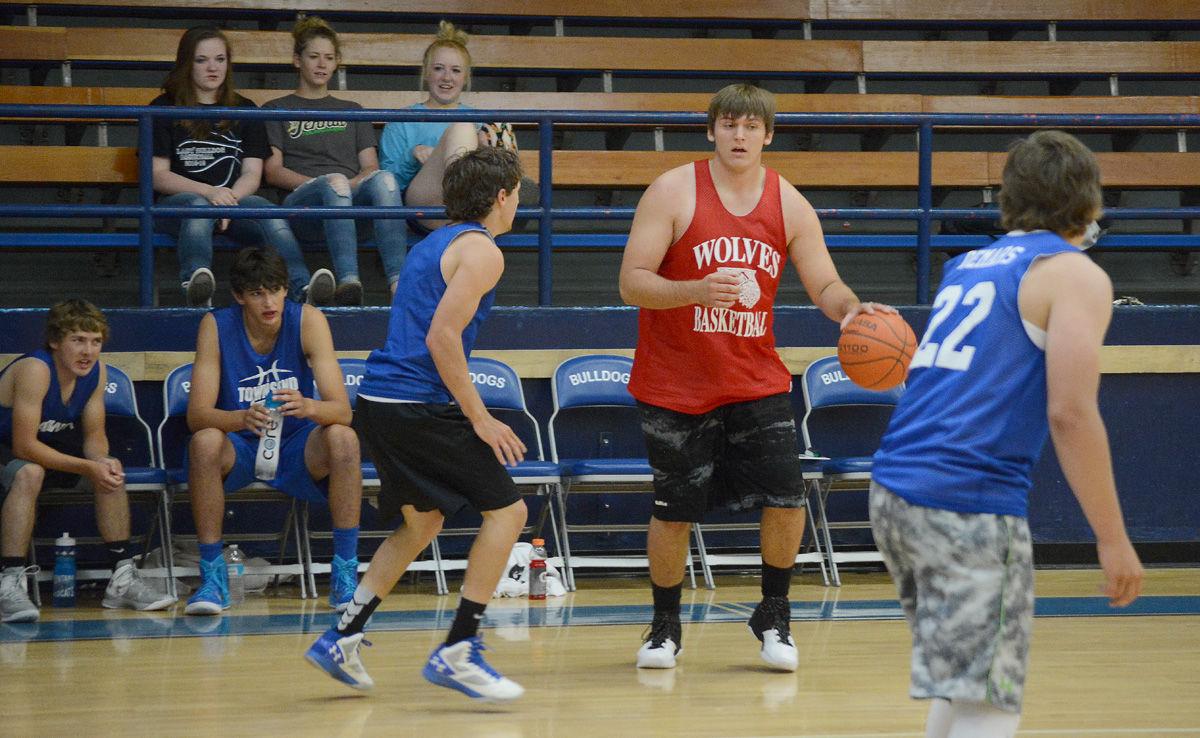 Noah Young, who will be a senior for Three Forks High School this fall, dribbles the ball during a scrimmage against Townsend Tuesday night.

THREE FORKS — Three Forks High School recently dipped into its past in order to solidify its present.

Terry Hauser returns to the Wolves as their new head boys basketball coach, and the 2003 alumni is hoping to turn around his alma mater’s program. Hauser’s coaching experience includes two seasons at the helm of Butte High as well as a one-year stint as the freshman coach at Three Forks.

Hauser replaces Tyler Palmer, who resigned after just one season as head coach, at the helm. Three Forks will also have a new girls coach after Norm Darlinton stepped down following three years at the program’s head coach.

“I’m just very excited. Not a lot of people have the opportunity that I’m getting blessed with this year. You don’t get to go back home and get a chance like this. We bleed red. It’s an amazing opportunity,” said Hauser. “I’m two years out of coaching and I’m just excited to have this opportunity. I have coached three-quarters of the kids that I will be coaching next season.”

“I think he will be a good coach for us,” Sauvageau, who also serves as Three Forks’ athletic director, said.

Following high school, Hauser went on to play for Western Montana College (which is now the University of Montana-Western) in Dillon. He redshirted as a freshman, and then earned playing time as a sophomore.

Hauser left college for a couple of years, and then went returned once current head coach Steve Keller took over the Bulldogs’ program to finish out his college career.

Hauser was fortunate enough to return to Three Forks to play a final time on the high school court while in college. UM-Western and Miles Community College held a scrimmage in Three Forks several years ago.

Three Forks finish with a 2-20 record a year ago. A very young team struggled through the season. The Wolves had just one senior and started three freshmen and a pair of sophomores.

Hauser feels that his players will get a lot of experience this summer in  scrimmages and in open gyms. It will also give him a chance to get to know his squad. Three Forks had a scrimmage in Townsend this week, and Hauser plans to have his team scrimmage Twin Bridges and Manhattan Christian.

“I like the scrimmages because it can be stopped, the play, and I coach some more,” said Hauser. “I have a handful eight to 10 at the gym. The same six are there every single night, Monday through Thursday. So I’m getting a good show up as you can expect, especially for the first year.”

In Townsend, Hauser called a timeouts and went out onto the floor work on a play or two. He was also allowed to take a longer halftime.

“It’s almost like a practice and it’s free. The kids don’t have to pay anything,” Hauser said.

The only expense was the purchase for gas for the trip to Townsend.

As far as open gyms, it gives Hauser an opportunity to work one-on-one with his players.

“That’s the best part. And I let them play five-on-five,” said Hauser. “But we do a lot of individual and post workouts — and guard workouts, dribbling drills. That’s when they are going to get better, with individual workouts.”

Three Forks has plenty of talent returning. Hauser noted that two of the seniors, Noah Young and Jared Pruett, will be working into the paint.

“He (Young) should be big for us. With him and Cory Yecny, we will have two 6-foot-6 players inside for us. Jared is 6-3, 6-4, but very smooth underneath. We will be able to pound it in side. And we have a lot of length outside,” said Hauser. “We’re going to be nine deep next year. I’m excited about the talent level we have. They are ready to compete next year.”

Hauser wants his players to learn how to win following a tough two-win campaign this past season.

“I want them to get use to winning with these scrimmages,” he said. “I’m working with them to learn how to jump stop, keeping their emotions in as far as scrimmages go, and competing all the time. Just like we did tonight, June 14, we competed about 35 percent of the time. I was really impressed with the last quarter. We competed all of the time.”

Hauser noted that both Sauvageau and Keller have been big influences.

“Huge, huge influence. Sauvageau was my high school coach. I learned a lot from him when I coached that one year here,” he said. “After coaching with him I finally learned what he was talking about as I was playing for him.  Plus, he’s the type of guy that is always there. So I can get advice from him. It will be fun to be coaching with him. He’s a phone call away. And he helped me get the Butte High job.”

Sauvageau has come out of retirement to take over Three Forks’ girls program after just one year.

“I knew they had a lot of talent coming back,” said Sauvageau.

Like the boys, Three Forks’ girls had just one senior this past season. The Wolves posted a 14-7 record just two years after a one-win season and placed fourth at the District 5B Tournament.

While Sauvageau is known for his 20-year tenure as the boys’ head coach, he also coached the girls for five years in the late 90’s when boys basketball played in the winter and girls were in the fall.

The girls won just four games during his first year at the helm in 1996. But Sauvageau quickly turned around the program and guided the Wolves to the state tournament from 1998 to 2000.

Three Forks’ 2000 squad won the district and divisional tournaments en route to taking a 22-2 record into the state Class B tournament.