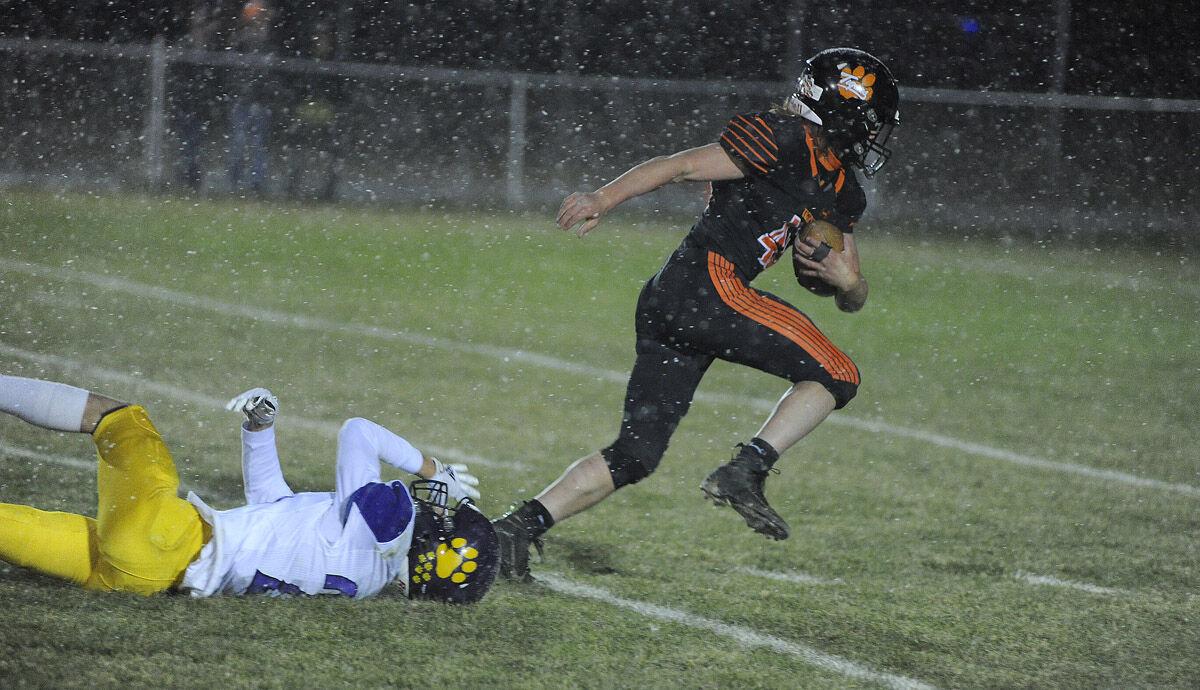 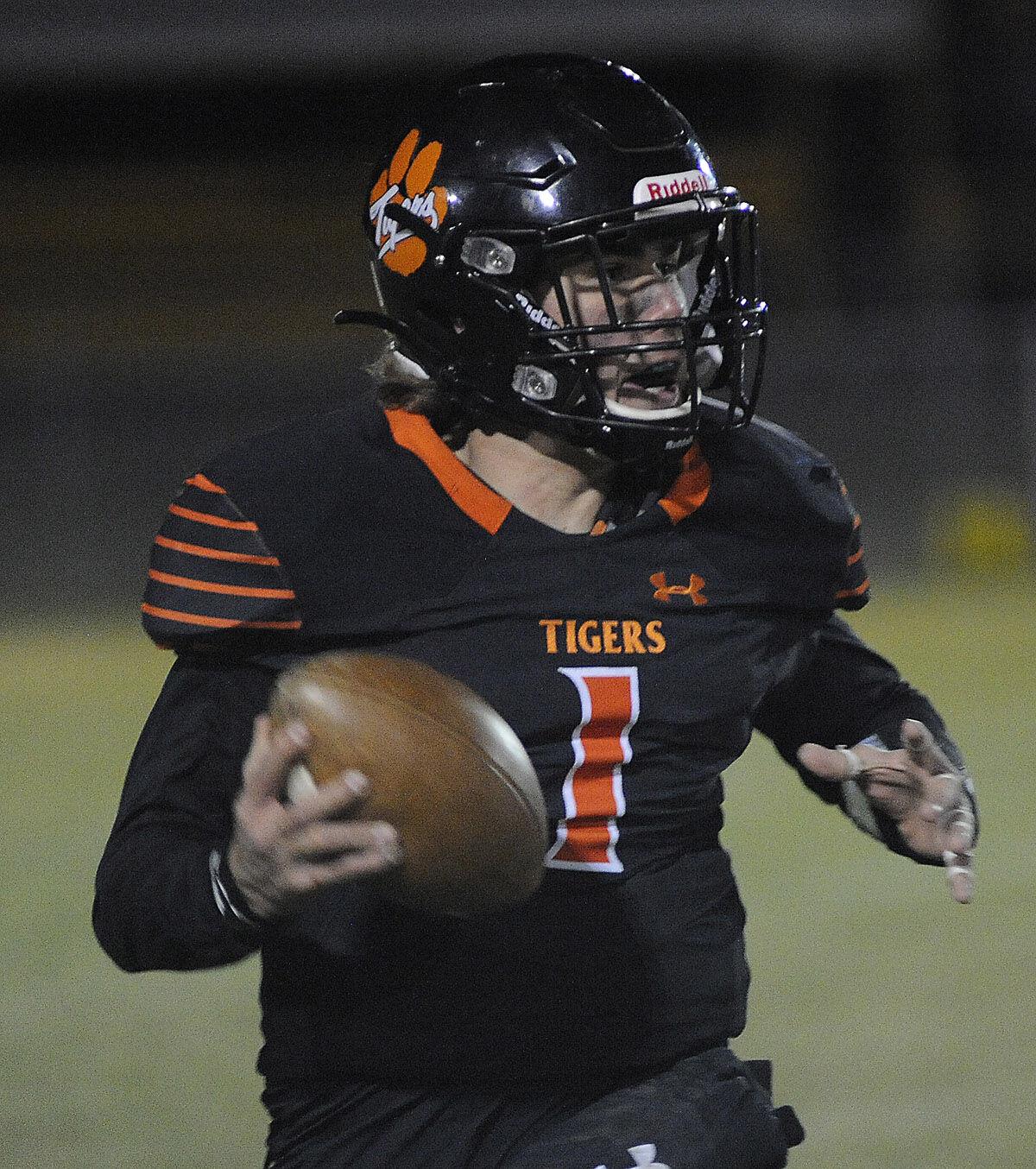 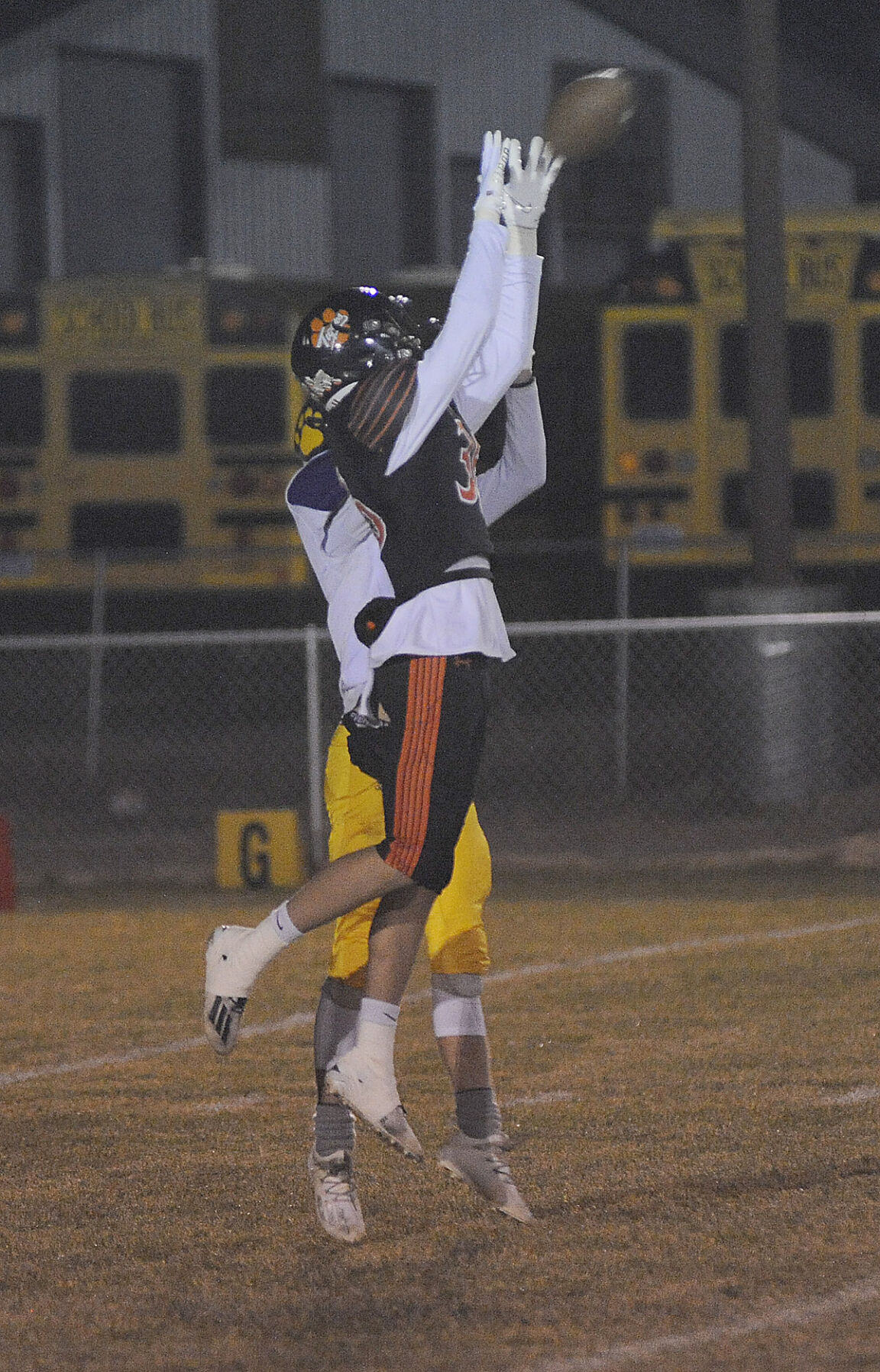 MANHATTAN — After coming close a couple of times in the first half, Manhattan’s special teams made the momentum changing play Friday night.

Gabriel Delgatty got the through the line and blocked a third quarter punt by Jefferson’s Caleb Smartnick. Four plays later, Toby Veltkamp scored on a 22-yard touchdown reception to give the Tigers a lead they would not relinquish.

Manhattan scored 18 straight points en route to rallying for a 24-13 Southern B victory. It capped the second consecutive unbeaten regular season for the Tigers, who will host Colstrip in a first round playoff game Oct. 31.

“These are the ones that count now. We obviously had a great run last year and that’s the goal again,” Manhattan coach Chris Grabowska said. “We’re just going to take it one week at a time and make sure we’re ready for every opponent and have a great week of preparation.”

The Tigers trailed 7-6 at halftime and then turned the ball over on downs inside Jefferson’s 35 on its first possession of the second half. That set up the punt block after the defense forced a three and out, and then Manhattan caught a break after taking over at the Panthers’ 30.

On second and long from the 22, Caden Holgate threw a pass to Corban Johnson over the middle. The ball went off his hands, but directly to Veltkamp a few yards further down the field. The senior then broke a tackle en route to scoring.

“Got a good tip there,” said Holgate. “Toby made a play like he usually does. It was a great play.”

Veltkamp continued to make plays, scoring on a 10-yard run with 8:29 remaining in the contest to stretch the lead to 18-7. Then Holgate tossed a 27-yard touchdown pass to Delgatty with less than two minutes remaining to make it 24-7.

Manhattan took a 6-0 lead on a 10-yard run by Michael Swan late in the second quarter, but struggled with penalties and mistakes, and trailed by a point at the break after Tom Meyer made a 28-yard touchdown reception with less than two minutes remaining in the first half.

“We went in at halftime, made some adjustments and just kind of got our morale back up,” said Grabowska. “They came out in the second half and got the job done.”

Part of the Tigers’ first half struggles could be attributed to the loss of Cayl DeBoer. The two-way senior lineman ruptured his intestines the previous week in Townsend, and has spent a week in the hospital following surgery.

“That’s a huge loss. It was tough and an emotional week and we were dealing with that,” said Grabowska. “Kind of spilled over into the game a little bit, but the kids battle. They’re winners and they found a way to get the job done.”

“It’s terrible what happened,” added Holgate. “We feel so bad and it’s our thing right now, do it for Cayl. And we’re going to give it our all for him.”

Manhattan did drive inside the Panthers’ 25 on its first possession of the game. But a 21-yard touchdown run by Veltkamp was called back on a holding call, and then a bad snap led to a 17-yard loss that the Tigers were unable to overcome.

Another penalty and low snap contributed to a punt the second time the offense had the ball, and Manhattan was forced to punt on two of its four possessions in the first half.

“I thought we moved the ball really well in the first half. We got down in the red zone twice and we kind of shot ourselves in the foot with penalties,” said Grabowska. “That’s part of the stuff moving forward we’re going to work on cleaning up.”

With the regular season in the rear view mirror, the focus is now on the postseason. And, as one would expect after coming so close last year, the goal is to get back to the championship game.

“We’re fighting for it,” said Holgate. “If we don’t get there we’re going to give it our all trying. I hope we do.”