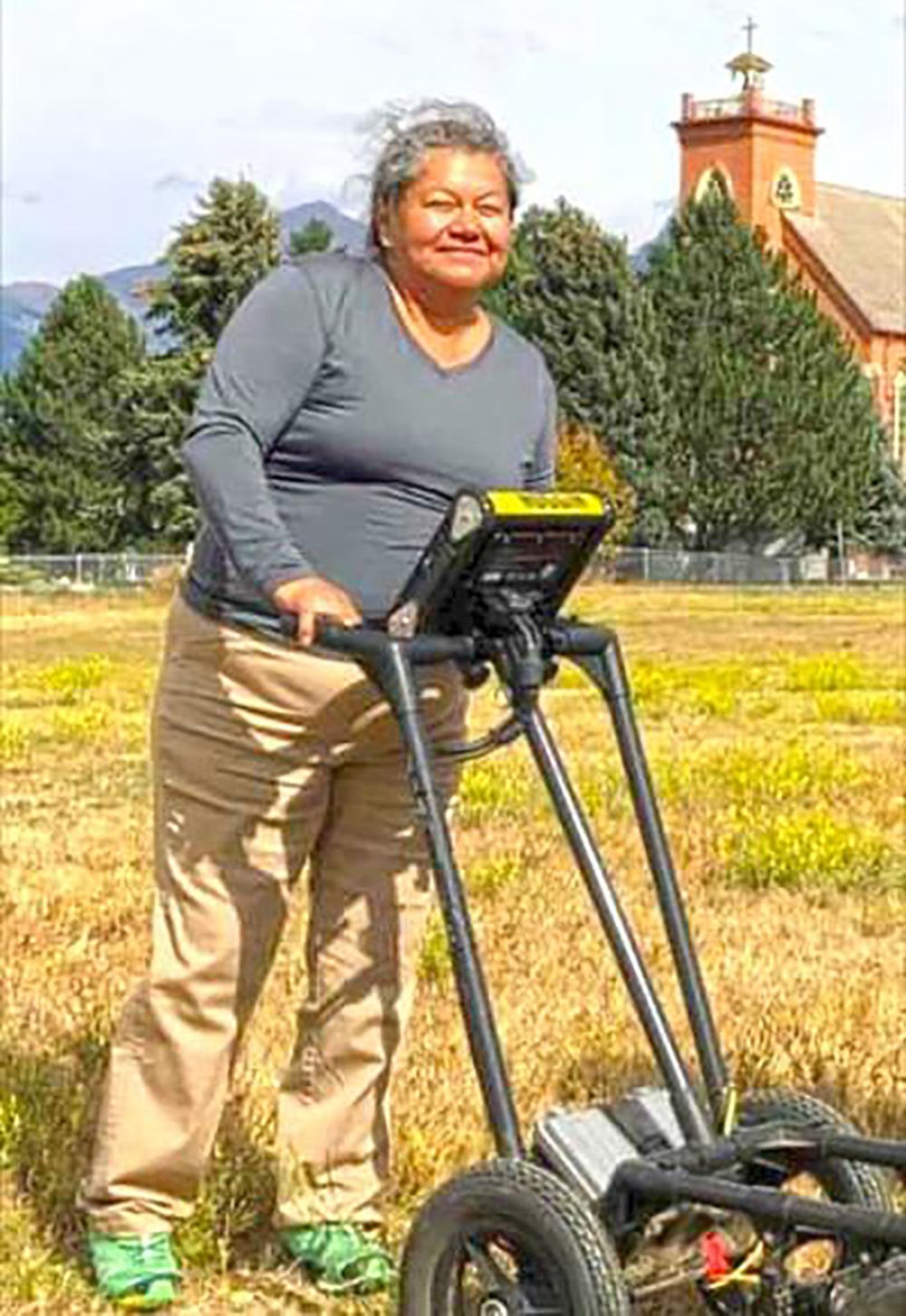 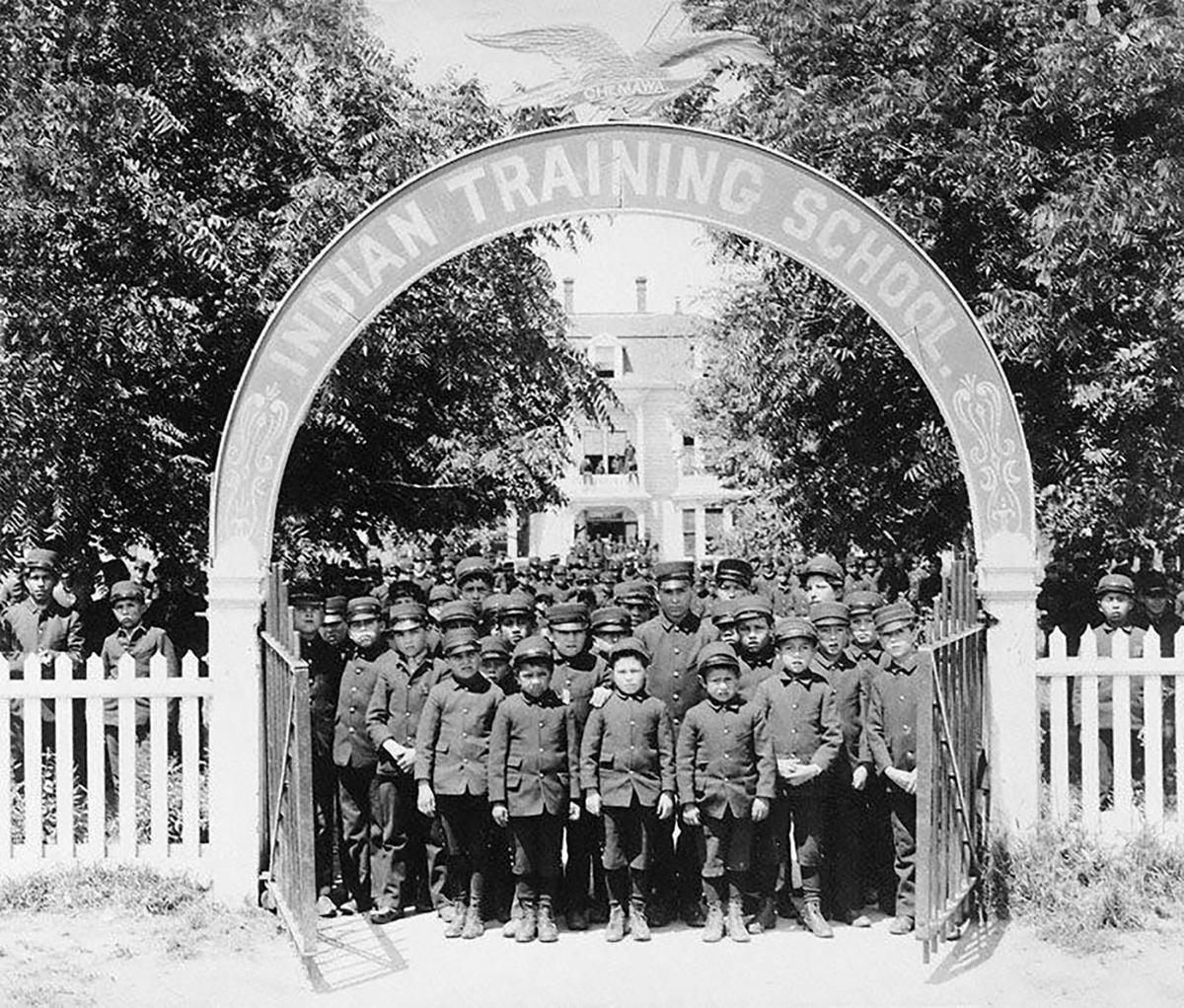 Indigenous boys pose under the front gate at Chemawa Indian School in Oregon in 1900. 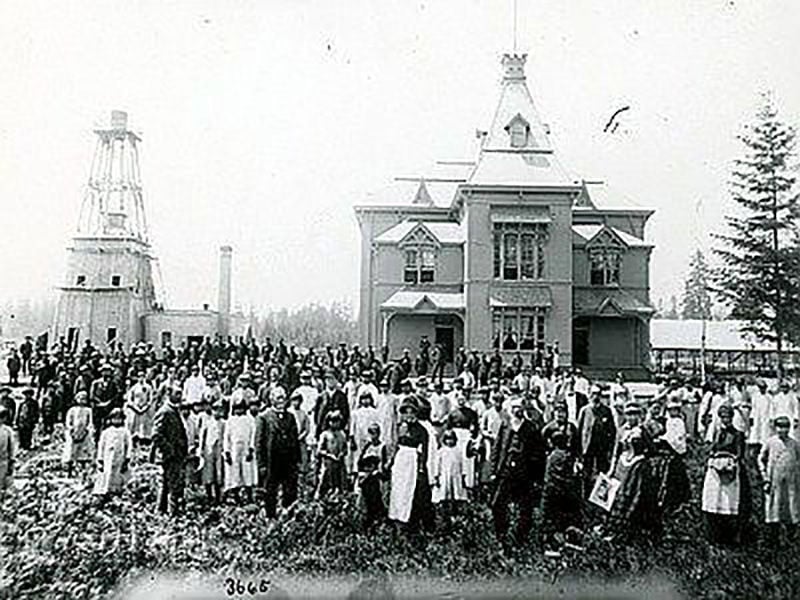 Students and staff pose at Chemawa in 1887.

Indigenous boys pose under the front gate at Chemawa Indian School in Oregon in 1900.

Students and staff pose at Chemawa in 1887.

BOZEMAN — Sometimes, when the young voices beneath her feet are sad or yet again engaging in disruptive meta-mischief, Marsha Small will pause behind the “baby carriage” she uses to locate them and lose herself amid her sobering surroundings.

Seven years after Small launched a ground-breaking search for children’s remains at the Chemawa Indian School just north of Salem, Ore. — the significance and poignancy of which the nation is only just now beginning to grasp — their voices still haunt her.

The 62-year-old Northern Cheyenne woman, known as Ota’taveenova’e (Blue Tipi Woman) by the Tŝiŝtistas people, describes becoming misty-eyed or dagger-eyed or both as she scans the grave markers. Her emotions are tempered slightly by 25 old-growth Douglas firs that soften the hum of traffic on nearby Interstate 5 and have provided her comfort since Small realized their shallow, serpentine roots are “cradling the children.”

Small’s mind flashes on images of the indignities that indigenous youth endured. Tens of thousands were sent to 367 U.S. boarding schools like Chemawa beginning in the late 1800s as part of a “Kill the Indian, Save the Man” assimilation ethos now viewed as cultural genocide. Their hair was shorn, their language barred, their heritage disavowed.

In the first seven decades at Chemawa, founded in 1880 and today the nation’s oldest continuously operating Indian boarding school, diseases such as influenza, cholera, trachoma and tuberculosis flourished in crowded dormitories, fostered by malnourishment and lack of proper treatment. Emotional, physical and sexual abuse were prevalent as well.

Since 2014, Small has documented 222 sets of remains at Chemawa, and she’s no less incredulous now than when she first rolled her ground-penetrating radar (GPR) machine, which looks like a baby stroller or lawn mower, across the cemetery grounds.

“You know what’s so strange about this?” Small, a Montana State University doctoral candidate with salt-and-pepper hair, finally asks rhetorically during an interview in Bozeman.

“Why is there a cemetery? It’s a school! What the heck? You got money to steal and kidnap a kid but don’t have money to send them home if they’re ready to die?

Small, who grew up on Montana’s Northern Cheyenne Reservation, channels her fury and tears through her search for “the babies,” first for her MSU master’s degree and now in pursuit of a Ph.D. She aims to identify all of them, learn how they died, and have their families bring them home — or, depending on the cultural protocols of the 72 tribes at Chemawa, let them rest but mark the graves so families can find closure.

Until now, Small’s efforts as “a voice for the children” have been largely done in obscurity, her funding so scarce she’s mired in debt. But the recent discovery in Canada of hundreds of unmarked indigenous graves at boarding schools, along with U.S. Interior Secretary Deb Haaland’s (Laguna Pueblo) creation of the Federal Indian Boarding School Initiative last month, could be a game-changer.

Though no surprise to Small and other indigenous leaders, Canada’s revelations are nevertheless another trauma for cultures grappling with four centuries of genocide and more recently with staggering numbers of missing and murdered women. Some experts, noting government estimates that 86 percent of indigenous children were in boarding schools by 1926, say as many as 40,000 children’s remains might be unaccounted for nationwide.

The renewed anguish is so traumatizing that a 24-hour crisis line for boarding school survivors and family has been established in Canada.

“How much more gut-punching can you do?” Small asks.

Now that the trauma is illuminated, though, Small said healing can begin if the U.S. follows Canada’s lead with a sincere pursuit of “truth and transparency.”

For Small, the Chemawa project — as well as her work at two other sites in the region — hits close to heart and home.

“Every Native has a relative who was at a boarding school,” Small said, adding with a smile: “Except for the two kids who hid in the bushes.”

Small never hid as a reservation child because nobody was paying much attention. She spent her early years at Muddy Creek, but when she was 10 or 11 her parents bought a house in Ashland just before they divorced and departed, leaving her to often fend for herself.

The next two decades, in which she lost her mother and brother, were a swirling “vortex” she has largely banished from her consciousness. To pay the bills, she pumped gas, welded and tended bar. Along the way, she bore a child, Amber, raising her solo in Montana and Oregon, occasionally handing the duties to her mother.

In 2002, 26 years after graduating from high school, she regrouped long enough to earn an associate’s degree from Lame Deer’s Chief Dull Knife College.

“I lived by myself, crazy, off the street,” she recalled. “I couldn’t breathe. I crawled to the edge many times to get to sanity but could never get there.

One day in 2007, when Small was living in Busby and still simply “existing,” Amber returned from Oregon and ordered her mother to pack. The next day, they were headed to Eugene where Amber and her husband, Brian Jackson, now own a honey farm on the McKenzie River.

“She said, ‘Figure out what you want to do with your life’,” Small said. “She saved me, really.”

Soon after, Small bought a bus ticket and headed south, “just to get away.” In Ashland, while wandering the town, she followed the sound of drumming to a powwow at Southern Oregon University, to her a clear message.

An unabashed lover of flora, she enrolled in SOU’s environmental studies program.

“I didn’t know what to do and was really lost, and then, ‘Boom!’,” she said. “It was like the drums called me in there. That’s what you call kismet, right?”

After graduation in 2010, Small worked for a watershed group to identify invasive and rare plants in northern California. In the process, she dabbled in geographic information system (GIS) mapping in hopes of using it to “better assist The People.” Later, at a conference in the Flathead, she was told she could do just that with a master’s degree from Montana State in Native American Studies.

Small was still asking the universe how to best create meaningful change when she sought master’s thesis advice from friend Robert Kentta, treasurer for the Confederated Tribes of the Siletz on the Oregon Coast.

“He said, ‘Hey, why don’t you go to Chemawa and do one of those GPR things, get one of those machines, and go see how many kids are in there?’ ” Small recalled. “He created the spark. After that, it was really the ancestors who pushed me to do this.”

She helped restore bison to southeast Montana tribes for the National Wildlife Federation and was instrumental in the creation of Indigenous Peoples day at MSU in 2016. She assisted the Blackfeet on a resource management plan. Small has taught Native American Studies at MSU since 2015 and was a distinguished visiting NAS professor in the anthropology department at Willamette University, a few miles from Chemawa. In 2017, she assisted in surveying the graveyard at Nevada City.

But it’s the boarding-school cemeteries that tap her soul. As she methodically covers the Chemawa grounds, she introduces herself to the children in Cheyenne. For protection, she does a smoke or smudge routine each time she enters the cemetery.

“Oh man, when I first got in cemeteries it was just overwhelming,” said Small, whose master’s thesis was titled “A Voice for the Children of Chemawa Cemetery.” “I could feel an emptiness. It was horrible. The sound of silence was so loud, so incredibly loud. As I got to work in the cemeteries — I know it sounds so meta — I started having flashes of what actually happened during sickness. It was scary at first.”

MSU doesn’t have GPR equipment, so she partners with Ohio Valley Archaeology, a private firm. Her machine sends thousands of radar pulses per second into the subsurface. When she encounters a significant anomaly, she’ll flag the spot.

When Small began at Chemawa, most of the cemetery markers had been leveled, vandalized or moved a half-century earlier. She suspects there are many more than the 222 remains she has documented, most below the one meter her GPR reaches; all but 12 graves she’s located pre-date the 1960s, as conditions and missions have changed dramatically under the Bureau of Indian Education.

Many markers are dated 1918, likely connected to the Spanish flu pandemic.

Similar rematriation efforts — the reclaiming of ancestral remains — have been underway for four years at Carlisle, which Small visited last month for the first time in search of 13 Northern Cheyenne children. The U.S. Army is fully funding the project.

At Chemawa, the work is more tedious. Records are off-limits due to privacy laws. Small notes her first success story required three years of matching before-and-after photos of five children, and yet their markers aren’t aligned with their graves and so “it’s still a guessing game.”

“Unfortunately many or most of the school cemeteries were demolished at some point, and many of the school enrollment and sanitary records are buried deep in the government’s archival bowels,” former Chemawa historian SuAnn Reddick recently told Oregon Public Broadcasting. “Finding names and tribes of the children will be a huge challenge.”

Yet with the issue now elevated, Small imagines more support, including crucial access to archives. Finishing her doctorate, she hopes, will help with funding.

In Montana, she would like to survey Fort Shaw and St. Labre, two of 17 schools listed by the Boarding School Healing Coalition.

As projects like hers proliferate, Small is adamant: They must include Natives every step of the way.

“Without that, we’re doing the same colonial system we’ve always done, which is to go extract information, get out the parts they want and take it,” she said. “It can’t work that way. There’s no healing in that. As a nation we need to heal, and we’re not going to be able to do that until the Natives are healed.”

Lajimodiere, who interviewed boarding-school survivors for a book — including her father, who nearly died at Chemawa and bore scars on his back from beatings — describes Small’s work as vital in light of Canada’s discoveries.

“It’s certainly traumatized all my boarding-school survivors,” Lajimodiere said. “And for those of us who listen to the stories, we’re in secondary trauma. We have a long way to go to help people with trauma, so it’s very important that we find these babies and bring them home, if that’s what the families want.”

Thus Small’s dedication to pushing her “baby carriage” under the firs at Chemawa, where she tries to reconcile the irreconcilable: cemeteries and schools. Soul-impacting, she calls her searching.

“If they’re not torturing me that day, I can get stuff done,” she said wistfully of the children. “If they’re mischievous, I can’t get anything done. It sounds so meta, but I can’t explain what goes on in those cemeteries unless you’re actually there.”

How long until she retires to her plants? At least 20 years, she says, or until babies are routinely going home. Until then, she won’t rest.

The voices of the children are calling.